The high elevations (brown shading) and rugged topography of the Basin and Range Province and Rio Grande Rift, which are actively forming can be seen in the shaded relief map, below. The Keweenwan Rift has sedimentary and volcanic rock layers similar to those found in the active rifts, but its topography is subdued because it formed over a billion years ago.

Like other continents, North America has thick crust, compared to the thin crust beneath the adjacent Atlantic and Pacific oceans. In the western part of the continent, divergent plate boundary forces are beginning to rip the continent apart, forming the Basin and Range Province and its adjacent eastern arm, known as the Rio Grande Rift. National Park Service sites in this region showcase block-fault mountains and volcanic features forming as the thick crust stretches and cracks apart, releasing magma from below. The long valleys (“basins”) separating the mountains (“ranges”) are filled with river and lake deposits and lava flows. Similar, but much older, layers are found in NPS sites in the Keweenawan Rift of the Lake Superior region, where divergent plate boundary forces tried, unsuccessfully, to rip the North American continent apart 1.1 billion years ago.

Continental crust is thick and buoyant, and therefore sticks up above sea level.

Where tectonic plates move away from one another the lithosphere thins. The underlying asthenosphere rises and expands like a hot-air balloon, elevating a broad region. If the plate is capped by thick continental crust, the resulting continental rift zone rises high above sea level. The Basin and Range Province is thus a high-elevation region that includes all of Nevada and portions of Wyoming, Utah, California, and Arizona, and extends into southern Oregon, Idaho, and Montana. It is similar to the East African Rift, where volcanic materials and sedimentary layers deposited by rivers and lakes partially fill rift valleys. Prominent planar surfaces (fault escarpments) along range fronts are evidence that the region continues to rip apart—erosion would smooth them out if the fault movement stopped. The Rio Grande Rift is an arm of the Basin and Range Province extending across westernmost Texas, New Mexico, and southern Colorado. Earthquakes, fault-block mountains, and volcanism at Guadalupe Mountains National Park and Bandelier and White Sands national monuments are consequences of the ongoing continental rifting.

Landscapes and Geological Processes at a Continental Rift Zone 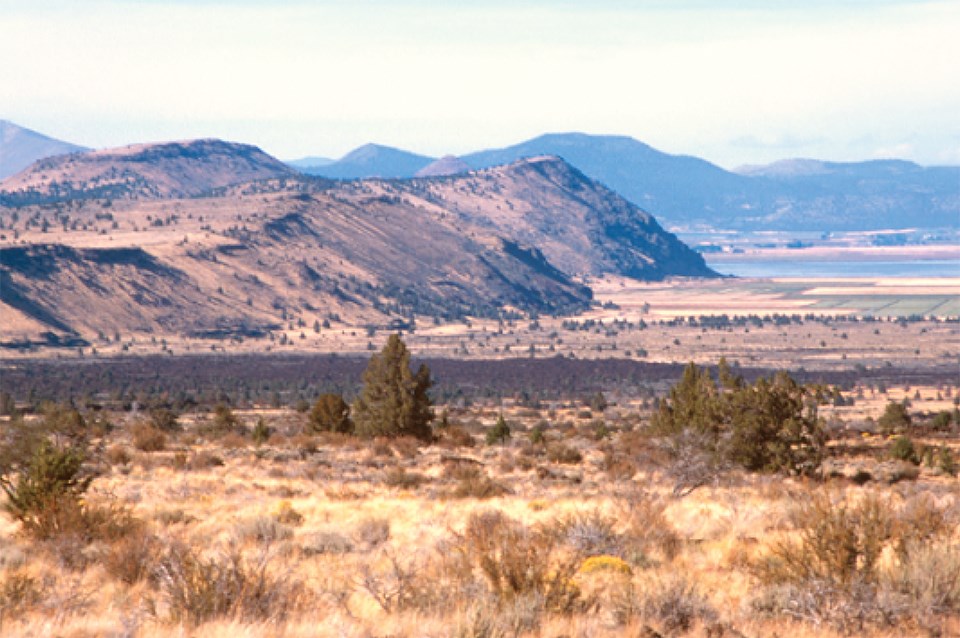 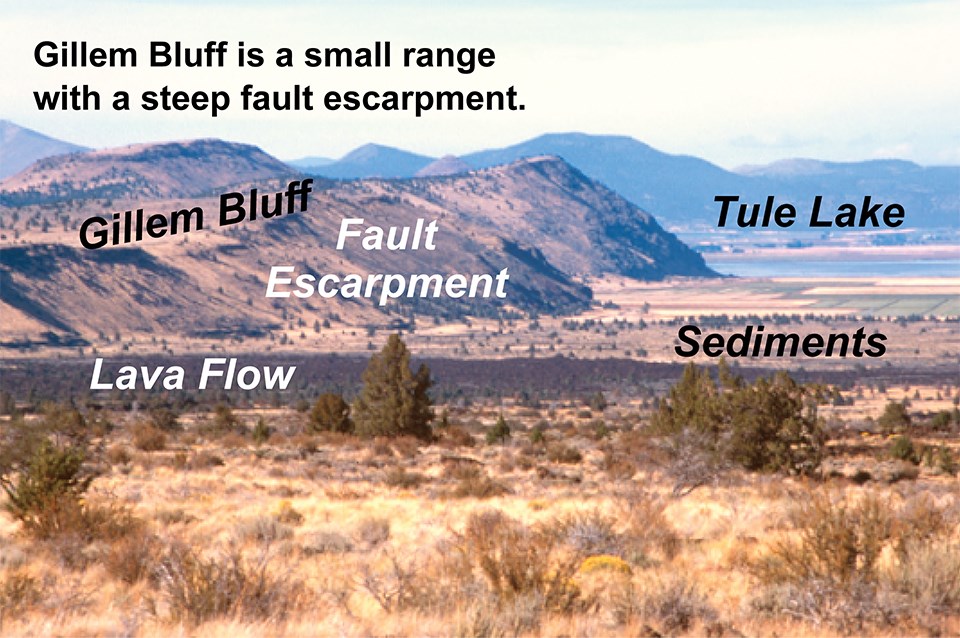 The east side of the Teton Range is a steep fault escarpment rising from the adjacent basin (Jackson Hole). 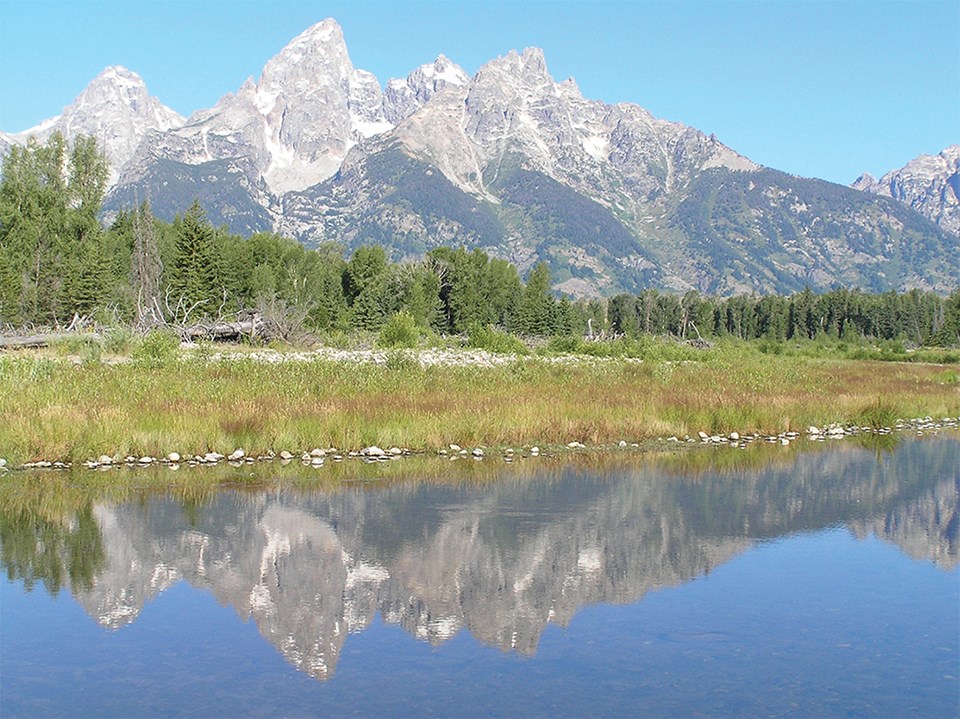 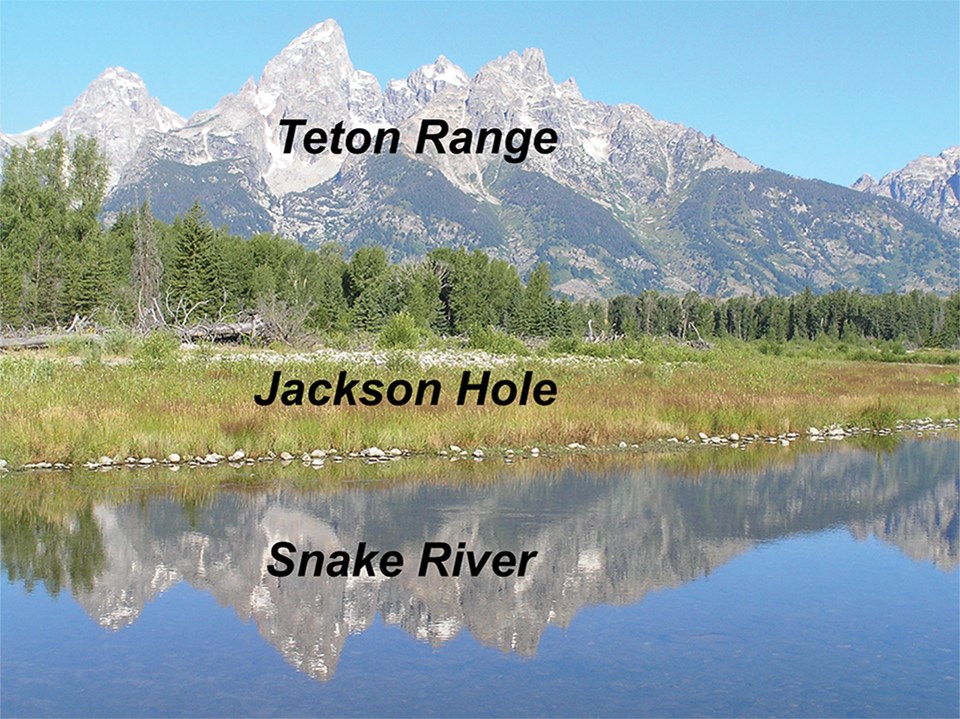 The topography of the Basin and Range Province and Rio Grande Rift reveals the full range of characteristics of a continental rift zone. First, much of the region—particularly the northern portion—is well above sea level. There the whole landscape is moving upward, with the ranges rising a little faster than the adjacent basins. For example, the floor of a basin in Wyoming, Jackson Hole, is 6,000 feet (1,830 meters) above sea level, while the adjacent Teton Range rises to over 13,000 feet (4,000 meters). But in the southern part of the province, where rifting is more advanced, elevations are generally lower—much of the floor of Death Valley in eastern California is below sea level!

Layers of sand, mud and gravel deposited by rivers and lakes, along with lava flows and other volcanic materials, fill rift valleys as they form. But sometimes the valley floors move downward much faster than these layers can fill them. Thus a second characteristic of continental rifts is that their valleys contain most of the deepest lakes in the world. These include the world’s deepest, Lake Baikal in Siberia (5,387 feet; 1,642 meters deep) and the 2nd and 4th deepest, Lake Tanganyika (4,323 feet; 1,318 meters) and Lake Malawi (2,316 feet; 706 meters), in the East African Rift. The Basin and Range Province has the world’s 8th deepest lake, Lake Tahoe on the California/Nevada border (1,645 feet; 501 meters). But what if there is not enough water available to fill a rift valley? The lowest point on Earth, the Dead Sea, is in a rift valley in the very dry Middle East. Similarly, the Mojave Desert of Southern California is so hot and dry that water evaporates before it can accumulate in Death Valley, the lowest point in North America (272 feet below sea level; -83 meters). During the waning stages of the latest ice age, between 20,000 and 10,000 years ago, the Basin and Range Province was much cooler and wetter than it is today. Basins thus held much more water than they do today. For example, Death Valley contained Lake Manly, some 80 miles long and 600 feet (180 meters) deep. Such lakes were important to indigenous Americans. Archaeological sites along ancient shorelines—today more than 300 feet (90 meters) above the levels of modern “pluvial” lakes—reveal much about these earlier cultures.

Continental rifting causes valleys floors to drop down along fault lines in the Basin and Range Province. Snake Valley, Tucson Basin and Death Valley are the basins, while the Snake Range, Rincon Mountains, Tucson Mountains and Panamint Mountains are the adjacent ranges. 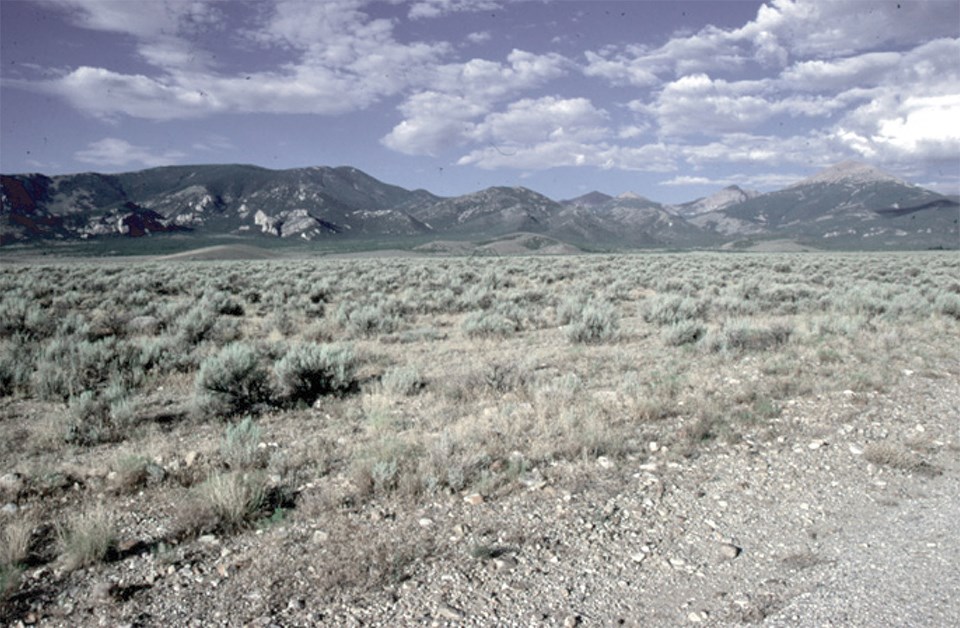 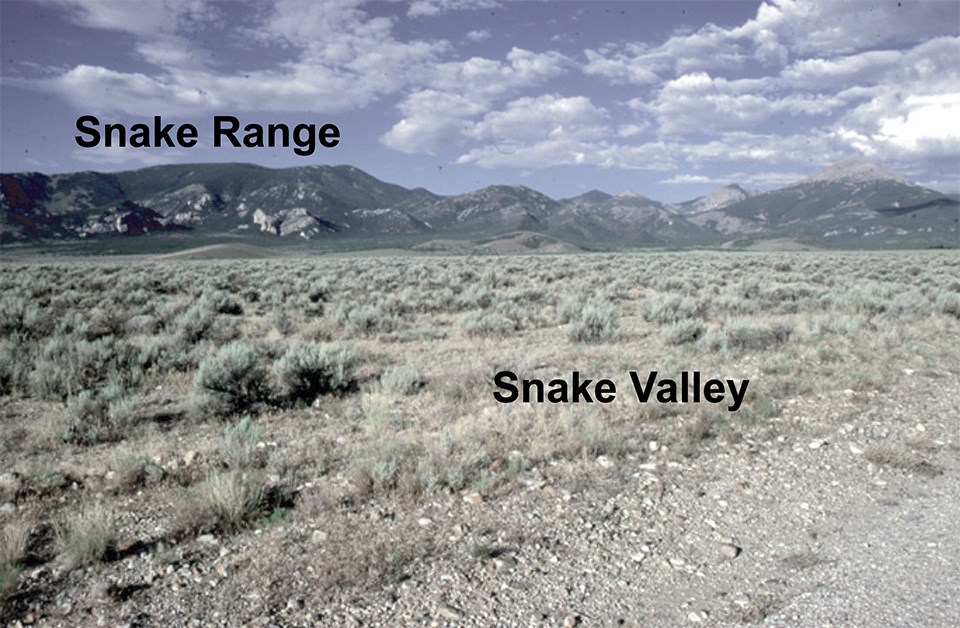 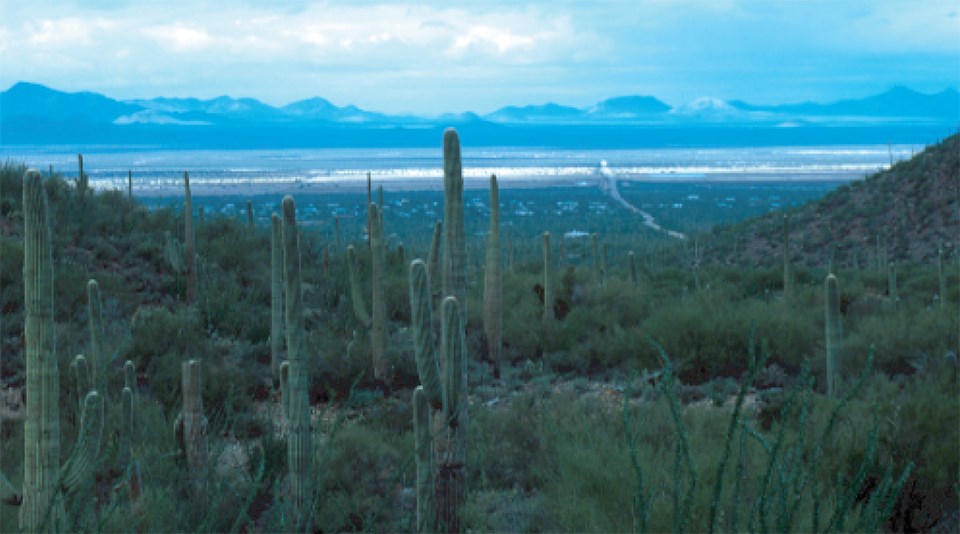 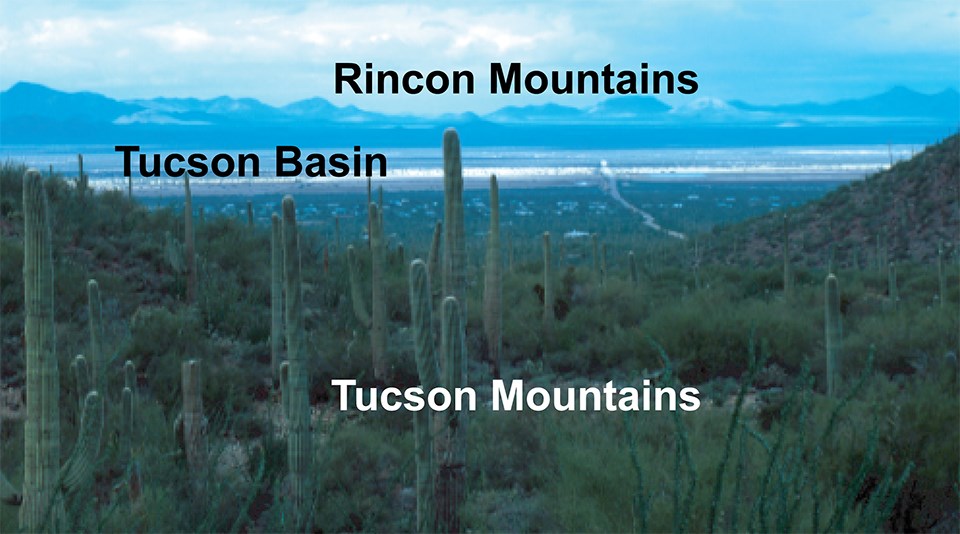 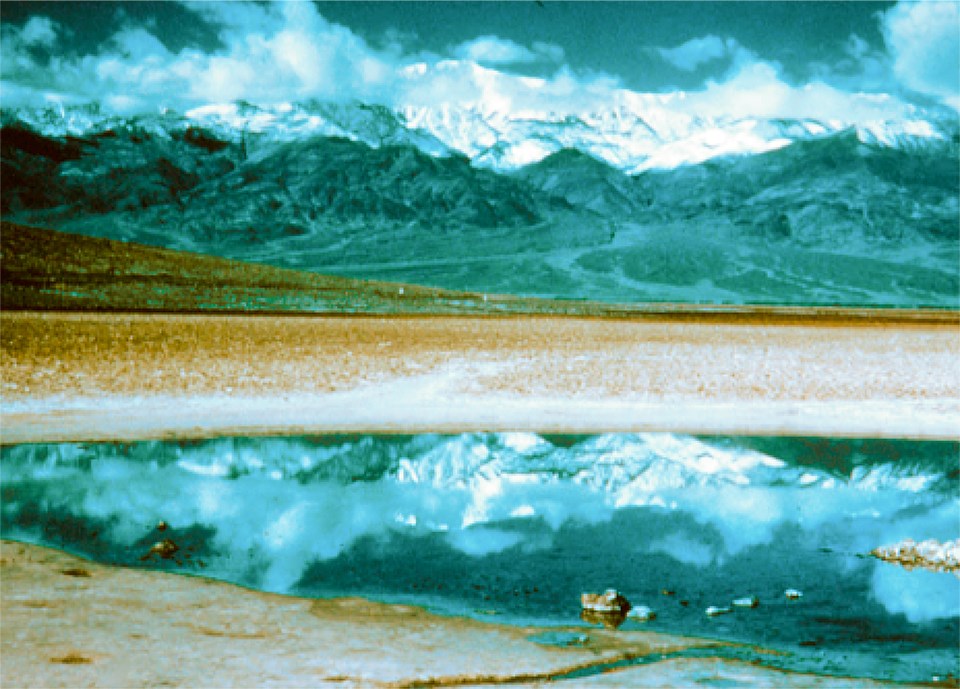 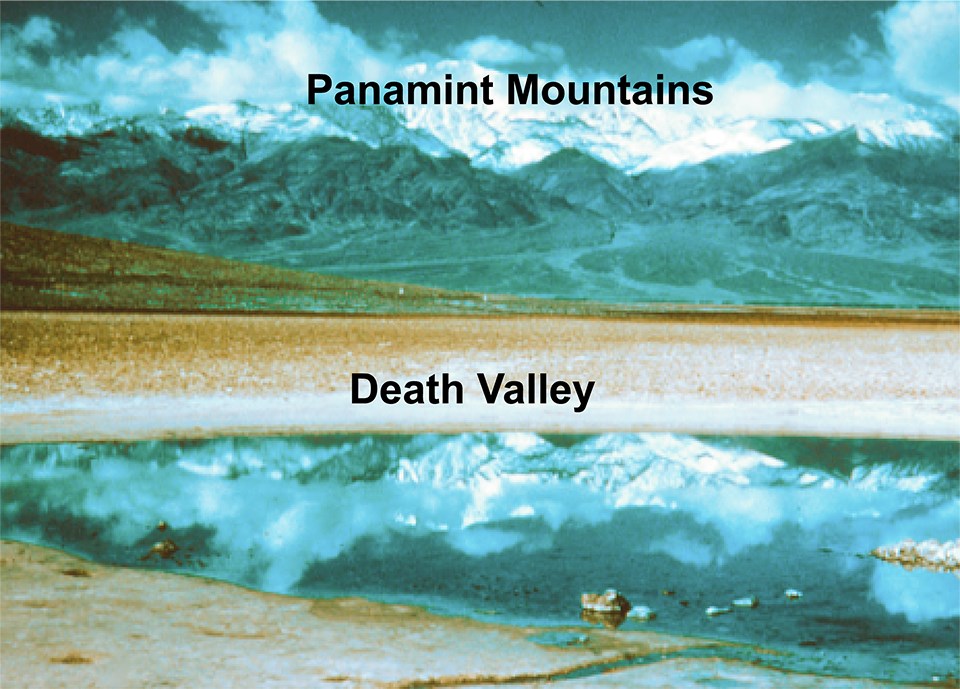 The same continental rifting processes that form the high-elevation valleys and mountain ranges of the Basin and Range Province and Rio Grande Rift also result in earthquakes and volcanic activity. As the lithosphere pulls apart and thins, the underlying, hot asthenosphere rises and expands like a hot-air balloon, elevating the entire region. The drop in pressure on the shallow asthenosphere makes it start to melt. Some of the liquid rock (magma) makes it to the surface and forms lava flows, shield volcanoes, cinder cones, and other volcanic features.

Only shallow earthquakes occur beneath the Basin and Range Province and Rio Grande Rift. The lower crust and underlying asthenosphere are so hot that they stretch in a ductile fashion (like silly putty), without producing earthquakes. But the upper part of the crust is relatively cold and breaks in a brittle fashion (like peanut brittle), making earthquakes. Prolonged stretching and thousands of earthquakes over tens of millions of years have thus resulted in the prominent “basin and range” topography.

Lower pressure on the hot asthenosphere also has another important effect. At its normal depths beneath the lithosphere, this part of Earth’s mantle is solid because it is under so much pressure. But if it rises fast enough it remains hot. Under the lowered pressure it begins to melt (much like superheated water flashes to steam when the lid is suddenly removed from a pressure cooker). Molten rock (magma) thus melts off the decompressed mantle beneath the Basin and Range Province and Rio Grande Rift.

A wide variety of volcanoes and volcanic products form in continental rift zones. Continental crust is thick and rich in silica. Magma originating from the mantle must initially melt its way through that crust in order to reach the surface. The magma becomes enriched in silica because high-silica minerals tend to melt first. Some of the lava that initially pours out at continental rift zones is thus thick and pasty, cooling to light-colored rocks (rhyolite and dacite), and steep-sided lava domes and composite volcanoes. As rifting progresses the crust thins, becomes depleted in silica, and has better-developed conduits, so that magma that originally melted from the mantle often reaches the surface. The bulk of the eruptions at continental rift zones thus produce fluid, dark-colored lava (basalt) that spreads out as low-profile shield volcanoes, or erupts in fountains forming cinder cones.

As with most of the natural world, many of Earth’s features do not fit neatly into one simple explanation. For example, the western half of Lassen Volcanic National Park in northern California has composite volcanoes and high-silica lava domes characteristic of the Cascadia Subduction Zone, while cinder cones and basalt lava flows in the eastern part of the park are more diagnostic of continental rifting in the Basin and Range Province. And while Craters of the Moon National Monument in southern Idaho lies along the Columbia Plateau–Yellowstone hotspot track, recent basalt fissure eruptions and cinder cones are most likely due to Basin and Range continental rifting.

About a billion years ago the central part of North America nearly ripped apart along the Keweenawan Rift. The process stopped, but not before the area looked something like the present Basin and Range Province or Rio Grande Rift. Sedimentary and volcanic rocks found in Isle Royale National Park and Keweenaw National Historical Park are products of this ancient continental rifting.

NPS Sites along the Keweenawan Rift

Continental Rift Features at NPS Sites in the Keweenawan Rift

Plate Tectonics and Our National Parks

Plate Tectonics and Our National Parks (2020)