Cinder cones are the most common type of volcano in the world. They may look like an idealized depiction of a volcano as they are steep, conical hills that usually have a prominent crater at the top.

Cinder cones are more technically known as scoria cones. Scoria are irregularly-shaped, highly vesicular (bubble-shaped cavities) fragments of lava that are erupted into the air and are typically solid when they land. Cinder is a more colloquial term that is widely used in the United States for pieces of scoria that are roughly nut- to fist-size.

Cinder cones are often surrounded by dark lava flows erupted from near their base. 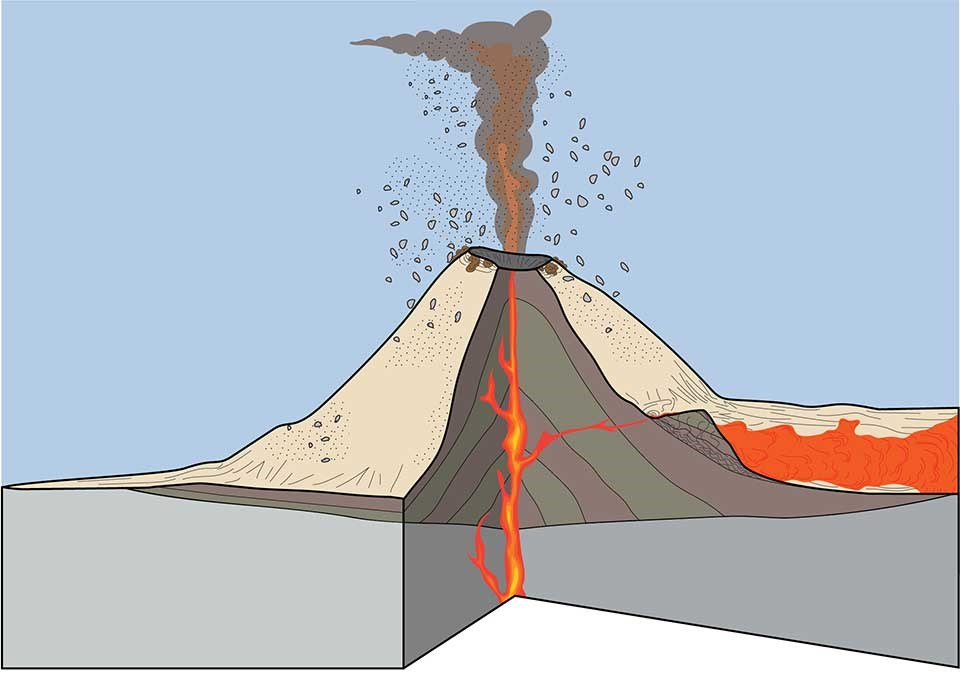 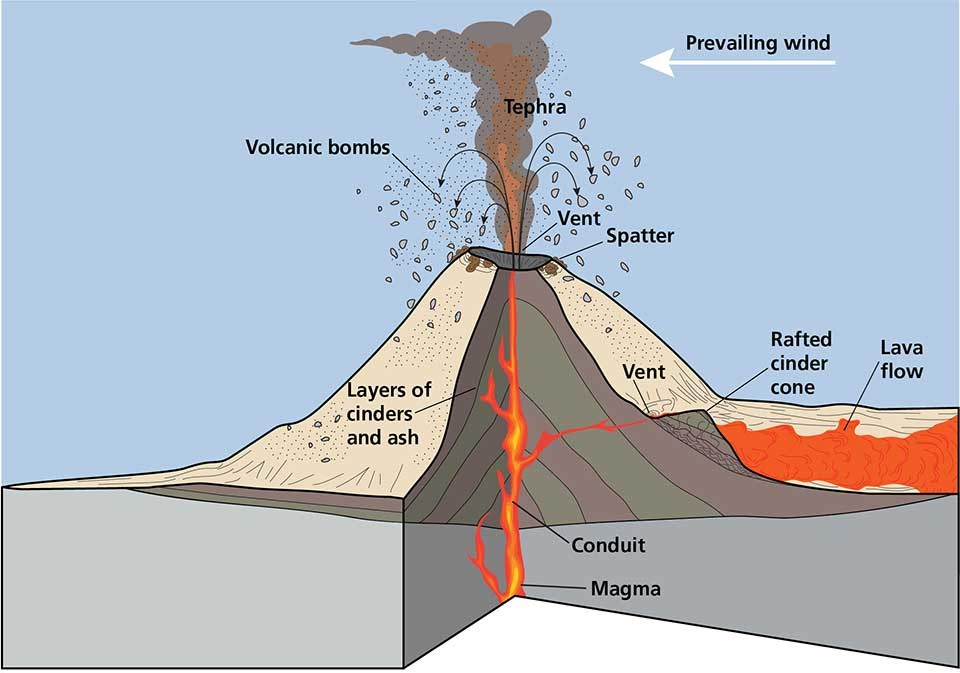 While sometimes they are nearly perfect cones like Sunset Crater Volcano, cinder cones frequently have an asymmetric shape. Cinder cones that form over a linear fissure vent are elongated, and ones that form in areas with strong prevailing winds may be much taller on the downwind side. Elongated cinder cones may also form when the location of the vent shifts during the eruption. They may also be breached when lava flows erupting from near the base of the cone carry away a part of the flank.

Most cinder cones are basaltic to basaltic andesite in composition, but they may be andesitic (intermediate).

The eruptions of most cinder cones are usually mildly to moderately explosive (Strombolian to Vulcanian), but rarely can have Sub-Plinian activity.

Their usually low explosivity is due to the low viscosity and low volatile content of magma.

Cinder cone eruptions are usually at 1-2 on the Volcanic Explosivity Index (VEI), but rarely may be as high as 4.

Cinder cones are generally monogenetic, meaning that they are the product of a single eruptive episode. After an eruption has ended, the plumbing system connecting the magma source area to the vent is blocked by rock (e.g., solidified magma).

Cinder cones commonly occur in association with other volcanoes. They may occur within calderas, near volcanic domes, and as satellite cones on the flanks of composite and shield volcanoes. Cinder cones frequently occur in volcanic fields with as many as hundreds of other cinder cones.

Cinder cones commonly occur in association with other volcanoes. They may occur within calderas, near volcanic domes, and as satellite cones on the flanks of composite and shield volcanoes. Cinder cones frequently occur in volcanic fields with as many as hundreds of other cinder cones.

Most cinder cones have a pronounced volcanic crater at the top. Capulin Volcano has a trail into the crater and around its rim.

Layers of Ash and Cinders

Cinder cones are made up of layers of pebble-sized or larger cinders and layers of ash. Larger volcanic bombs and blocks may also be present.

The overall slope of a cinder cone is determined by the angle of repose, which for ash and cinders is between 25 and 32°. Cinders that pile up around the vent may exceed the angle of repose periodically during an eruption. When this happens, cinders and ash avalanche down the sides of the cone and into the crater to reestablish a slope at the angle of repose. These avalanches play an major role in forming the layering in cinder cones.

During waning stages, cinder cone eruptions become less explosive. As a result, cinders and globs of lava are not ejected as high into the air, and may still be molten or partially molten when they land. These may weld together to form deposits called spatter, which may resemble lava. Spatter deposits may form protective armor around the rim of a cinder cone, slowing erosion. Spatter deposits on Capulin Volcano’s rim and crater is largely responsible for its youthful (e.g., largely uneroded) appearance although it formed more than 54,000 years ago.

Most cinder cones have a vent at the base or side of the volcano where basaltic lava flows are erupted. These basal vents are sometimes called cones are called bocas or boccas (Spanish or Italian respectively for “mouth”). The side vent areas may be complex and contain a variety of features such as lava lakes, spatter deposits, push-ups, and even pieces of the cinder cones flank that were carried away as rafts by the erupting lava flows.

Because cinder cones are usually monogenetic, there should not be a risk of eruption at an existing cinder cones. But a new cinder cone may form nearby if an eruption commences. Precursors to cinder cone eruptions include earthquakes and rumblings (subterranean noises).

Geohazards on existing cinder cones include rockfall, debris flows, and other mass wasting events on the slopes.

Cinder cones are the “most endangered” volcanoes on Earth because of the many uses humans have for cinders. They are easily mined for cinders to use in road construction, to sand icy roads, and for “lava rocks” for gas grills.