A volcanic crater is a bowl- or funnel-shaped depression that usually lies directly above the vent from which volcanic material is ejected. Craters are commonly found at the summit of volcanic edifices, but they may form above satellite (flank) vents of composite and shield volcanoes.

Craters are landscape features that form during eruptions. They are formed by blasts or other explosive eruptive phenomena, including phreatic and phreatomagmatic processes. Some craters persist long after eruptions have ceased, but they will eventually be degraded and removed by erosion.

Other craters are buried by later eruptions or filled by lava domes growing in them.

The size and shape of craters may change during eruptions. For example, they may be enlarged by later eruptions that are more explosive, or enlarged by slumping into the vent. They may be breached by lateral or directed blasts such as happened during the 1980 eruption of Mount St. Helens.

Cinder cone craters are commonly simple circular depressions at the summit. During eruptions they are kept clear by explosions. In some ways, these craters are constructional features because they are also formed by tephra accumulations around the vent.

Slumping of unconsolidated cinders into the vent area is one the main ways that these craters become wider.

Some cinder cone craters are armored by spatter deposits formed when cinders are still molten or partially molten when they land so that they weld together. Some of the best-preserved craters on cinder cones are the result of spatter deposits.

Capulin Volcano’s rim is protected by spatter (in foreground) formed near the waning stage of the eruption when pyroclasts (bombs and cinders) were still molten as they landed and welded together to form consolidated rocky deposits. Capulin’s crater has a diameter of about 1,400 feet (425 m) and is nearly 300 feet (90 m) deep. Capulin Volcano erupted 54,200 years ago.

Cinder Cone’s double rim was probably formed by fluctuating intensity late during the eruption. Cinder cone formed at about 1650 CE. The outer crater has a diameter of approximately 900 feet (275 m), and the crater is about 200 feet (60 m) deep.

Maars have unique volcanic craters as they are cut into the pre-eruption surface rather than being formed within a volcanic edifice. Country rock may be visible in maar crater walls, and there may only be a thin mantle of volcanic tephra in these craters.

Orange country rock consisting of Miocene sedimentary rocks are visible in the walls of Ubehebe Crater. Deposits from the phreatomagmatic eruption that formed Ubehebe Crater are approximately 160 ft (50 m) thick along the rim.

Summit craters on composite volcanoes may be complex as they may contain crater lakes, fumaroles, and/or volcanic domes. These craters are dynamic and often change during the life of the volcano. New craters are often blasted out, or existing craters are enlarged at the start of a new eruption. Craters may be partially or entirely filled by lava domes growing in them.

Because volcanic gases are often emitted from craters even during periods when a volcano is not actively erupting, fumaroles are common in craters. Summit craters may also be filled with lakes that may be acidic from volcanic gases emitted in fumaroles. Fumaroles and crater lakes often cause extensive hydrothermal alteration throughout the crater area.

Summit craters of composite volcanoes may also contain glaciers, such as at Mount Rainier National Park.

The truncated summit of Mount Griggs results from three nested craters. The outer crater is 0.9 mile (1.5 km) wide, which probably formed from collapse (e.g., a caldera). Much of the outer crater has been filled by an inner cone.

Redoubt’s crater has changed during its eruptions in 1989-1990 and 2009. The summit crater is 1.1-miles wide (1.8-km-wide) and is breached on the north side by the Drift glacier. The most recently active vent is located on the north side of the crater.

This lava dome grew in Redoubt Volcano’s summit crater in May 2009. At least two previous domes that formed earlier in the event were destroyed by explosions.

The East Crater of Mount Rainier is filled by a glacier that contains 2.2 miles (3.5 km) of surveyed ice caves formed by fumaroles. The crater’s rim is also kept mostly free of snow and ice by fumaroles. The diameter is about 1,400 feet (425 m).

Many domes do not have craters since they form in effusive eruptions. But those that do these landscape features have explosive craters, sometimes formed by phreatic activity. 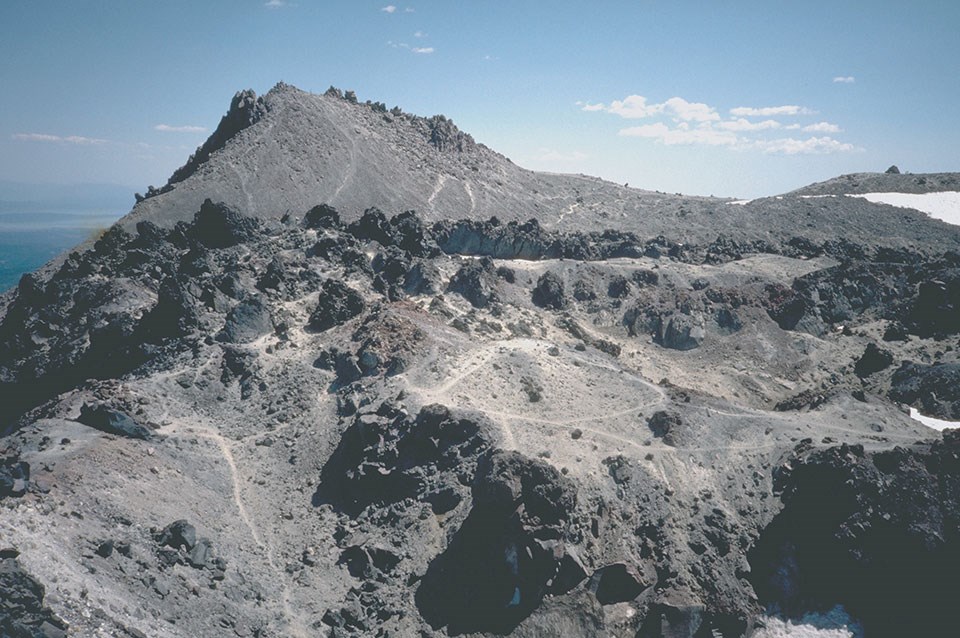 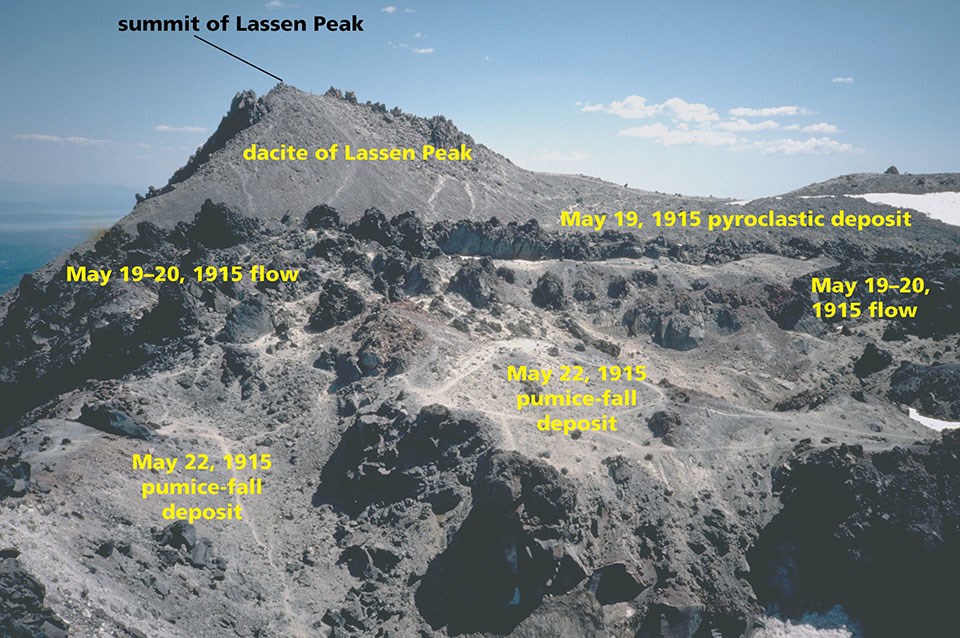 Lassen Peak is a large dome that had a crater form at a new vent at the start of the 1914-1917 eruption. The crater was formed in the 27,000 year old dacite of Lassen Peak, and was enlarged through subsequent activity.

These eruptions produced another dacite dome, a dacite lava flow, a pyroclastic deposit, and a pumice fall deposit. Lahars also produced through these eruptions roared down the northeast flank of the mountain and flowed many miles down the valley.

Volcanic craters are formed during explosive eruptions, but there are other types of depressions on volcanoes that are collapse features. These features are “craters” in that they are declivities, but they were formed by fundamentally different processes.

Pit craters are small craters that are usually steep-sided depressions formed from subsidence, or collapse. They form from the bottom up by progressive collapse over a void.

At least 174 pit craters have been mapped in Craters of the Moon National Monument, with diameters ranging in size from 16 feet (5 m) to 1300 feet (400 m). Most of these pit craters are in chains and are located above volcanic fissures.

Pit craters are present in Hawai‘i Volcanoes National Park, mostly along the East Rift Zone and Southwest Rift of Kīlauea, with several them visible from the Chain of Craters Road.

Mauna Loa has ten named rift-associated pit craters. The pit craters along the rift zones form from settling and cooling of the volcano.

Halema'uma'u is a pit crater within Kīlauea Caldera located at the summit of the volcano. A lava lake has been present in Halema'uma'u at many periods during Kīlauea’s eruptions.

Oral history says that Halema'uma'u is the permanent home of Pele, the Hawaiian volcano diety.

Calderas are collapse features with a diameter greater than 0.6 miles (1 km) that form from the collapse above an underlying magma chamber that has been excavated during an eruption. Calderas may form at the summit of shield and composite volcanoes.

Calderas are both landforms that are parts of other volcanoes and a type of volcano in their own right.

Photo (right): Crater Lake sits in a caldera that formed during the eruption of Mount Mazama 7,700 years ago. It took several hundred years for precipitation to fill the lake. Crater Lake National Park, Oregon.
NPS photo.