Although shield volcanoes are the largest volcanoes on Earth, they do not form soaring mountains with conical peaks like composite volcanoes. Instead, they are broad volcanoes with gentle slopes and are shaped somewhat like a warrior’s shield lying flat on the Earth. Shield volcanoes have a convex shape as they are flatter near the summit.

Shield volcanoes are truly massive with volumes that dwarf other types of volcanoes, even large composite volcanoes.

Shield volcanoes are usually constructed almost entirely of basaltic and/or andesitic lava flows which were very fluid when erupted. They are built by repeated eruptions that occurred intermittently over vast periods of time (up to a million years or longer). 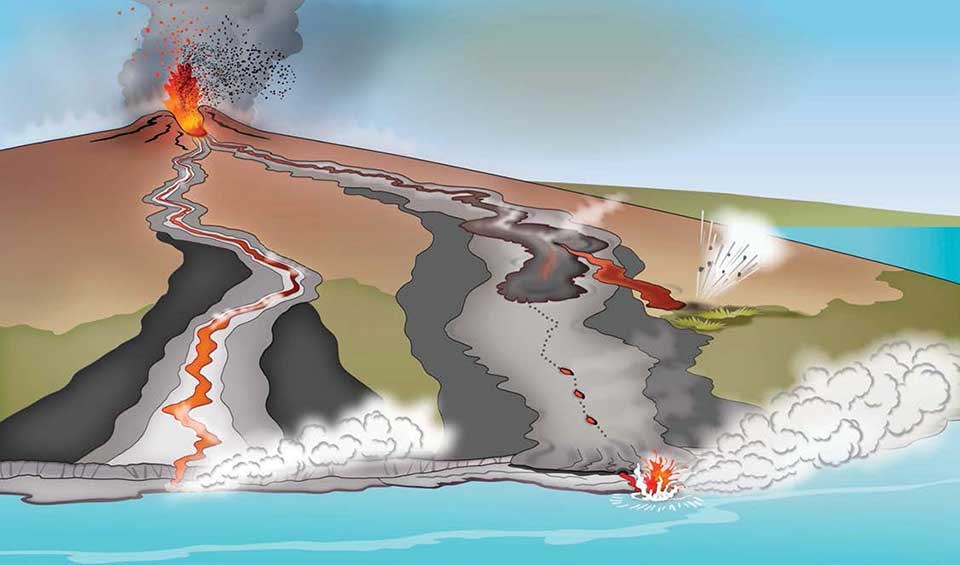 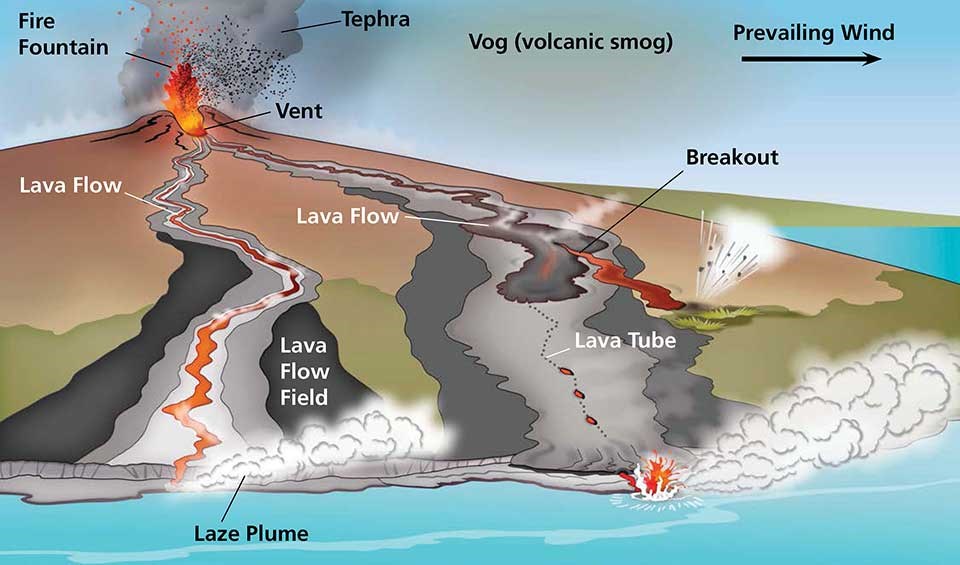 Shield volcanoes have very gentle slopes of only a few percent that become even more gentle near the summit. The great width of these volcanoes relative to their height is the result of the low viscosities of erupted lavas that produce thin widespread lava flows, eruptions from both the summit and fissure vents on the volcano’s flanks, and widening and subsidence along the summit and rift zones. Lava flows may travel in channels or in lava tubes great distances from the vent where they were erupted.

Large shield volcanoes typically have calderas at their summits which may contain long-lasting lava lakes. Shield volcanoes may also have pit craters, which are smaller collapse structures, often with vertical sides.

Large shield volcanoes are polygenetic, meaning that they experience many eruptions during their lifetime.

Shield volcanoes occur anywhere where there is basaltic (and sometimes andesitic) volcanism, including at oceanic hot spot tracks such as in the Hawaiian Islands. They may also be present at mid-ocean spreading ridges. They are present in a wide variety of continental environments, including adjacent to subduction zones, in continental rift zones, and in other intercontinental settings.

Collapse calderas are usually located at the summit of large shield volcanoes. These calderas form via subsidence caused by removal of magma from the shallow magma chamber underneath the summit by eruption or intrusion, commonly on the flank of the volcano.

A shield volcano may have many summit calderas during its lifespan as they may become filled with lava. Summit calderas are dynamic as they may change due to further subsidence, have active lava lakes, and/or contain pit craters.

Kīlauea’s summit caldera dramatically changed in 2018. The lava lake in the Halema‘uma‘u pit crater drained and then the pit crater subsided due to magma withdrawal from the magma chamber beneath it. This image shows ground cracks caused by the subsidence. The obvious flat surface in the center of the image is the former floor of Halema‘uma‘u.
USGS photo.

Lava lakes may form in some calderas or other vents on shield volcanoes when there is good connectivity between the vent and the magma supply. Mauna Loa and Kīlauea in Hawai’i Volcanoes National Park have both had persistent lava lakes in their calderas at various points during historical eruptions.

Eruptions that occur along rift (fissure) zones are a major feature of some shield volcanoes, particularly the shield volcanoes that make up Hawai‘i. The presence of rift zones are responsible for these shield’s elongated shapes. Rift zones and summit vents typically share the same magmatic source with magma moving laterally from the shallow magma chamber beneath the summit to feed rift eruptions.

The rift zones on Mauna Loa and Kīlauea contain vents, fissures, pit craters, spatter cones, cinder cones, and grabens. Kīlauea’s rift zones are oriented parallel to the mobile southern flank that accommodates spreading and widening since Kīlauea is buttressed against Mauna Loa on its northern flank. Eruptions occur along rift zones because they are areas of weakness, hence allow pathways for magma to travel within the volcanoes.

Lava tubes form when molten lava flows in channels underneath a solidified crust of a lava flow. Empty tubes can be left when lava drains out when it is redirected or upon the end of an eruption.

In Hawai’i, lava tubes have great cultural importance. They provided shelter to Native Hawaiians, and were central in some ceremonies and burials.

Vog (volcanic smog) consists of SO2 (sulfur dioxide) gas and aerosols produced by active shield volcanoes. It presents a hazard both in the immediate area and to people who are downwind.

Landslides along the flank of the volcano, subsidence at calderas and pit craters, and active fumaroles may also present volcanic hazards.