Maars and tuff rings are low-standing volcanoes with wide, bowl-shaped craters. They commonly have a donut-like profile, and may be breached. Their low edifices consist of shallowly-dipping deposits of tuff made mostly of ash and angular, nonvesicular pebble-sized pyroclasts (lapilli).

A maar is a volcanic crater in which the crater lies below the surrounding ground level and is surrounded by a low pyroclastic cone. Because they are topographic lows, maars frequently contain lakes in their craters.

A tuff ring is a pyroclastic cone with a crater above the surrounding ground surface. Tuff ring craters are usually dry.

Maars and tuff rings are usually associated with diatremes. Diatremes are funnel-shaped breccia pipes formed via phreatomagmatic (hydrovolcanic) explosions and fragmentation. This type of volcano is also known as a maar-diatreme volcano. 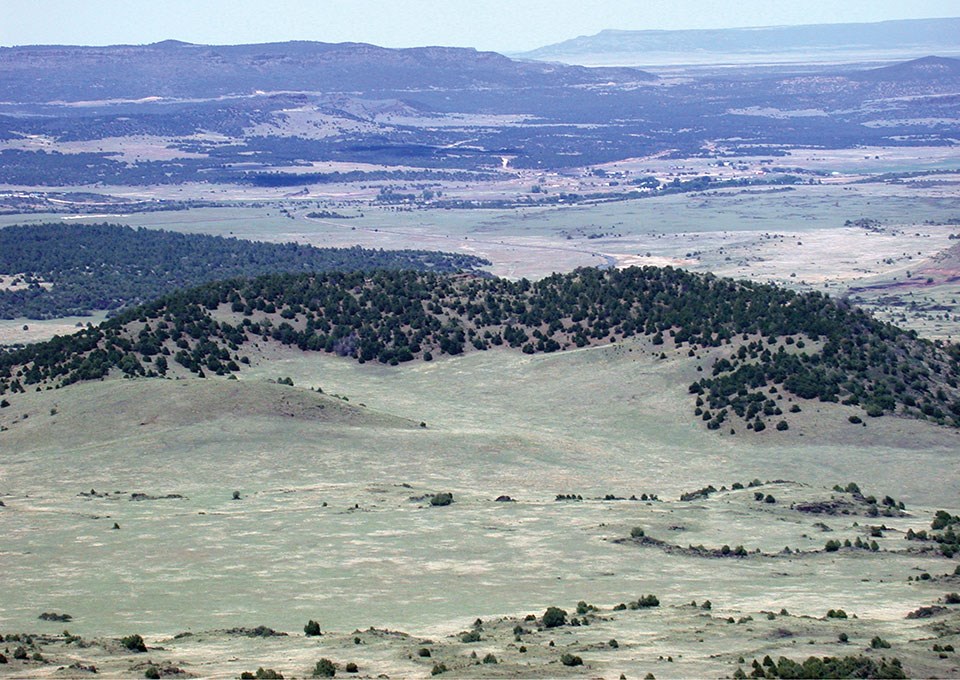 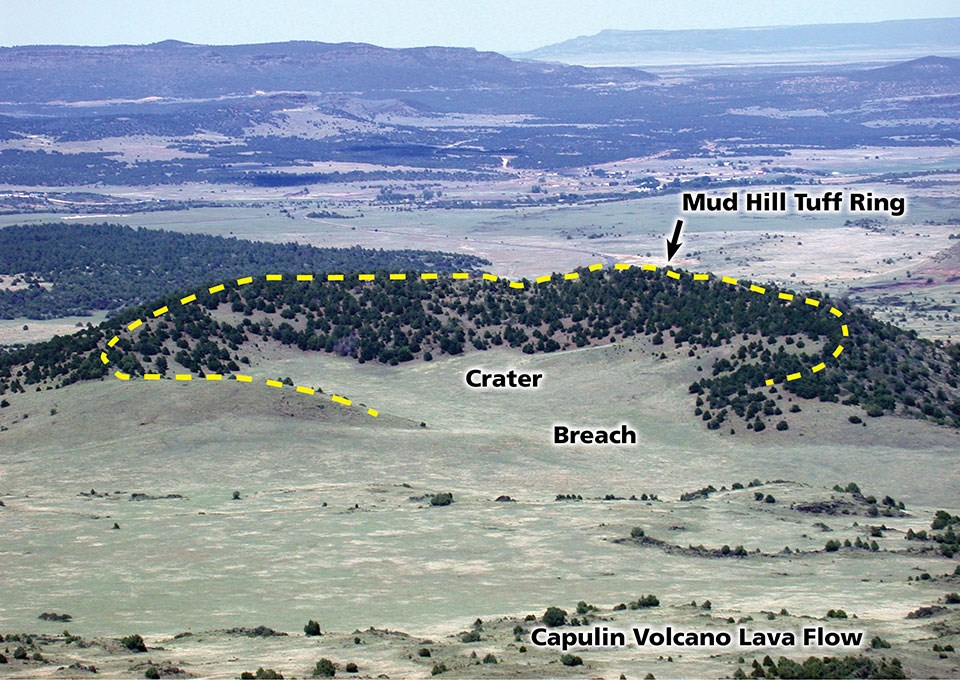 Pyroclasts are deposited via both ash fall (or fallout) and base surges.

The word “maar” comes from a German dialect word for the circular lakes found in these volcanoes in the Rhineland area of Germany.

Most maars and tuff rings form from low-viscosity magmas with basaltic and other mafic or ultramafic compositions.

The eruptions which produce maars and tuff rings result from magma-water interactions at or near the surface. These phreatomagmatic (hydrovolcanic) eruptions are classified as Surtseyan eruptions and are the wet equivalent of Strombolian eruptions. The mixing of magma and water produces steam explosions which blast magma into fine-grained, angular fragments, and excavate large craters. It is thought that the explosions that form tuff rings occur closer to the surface than those that form maars.

The eruptions are generally quite complex and episodic, with multiple eruptive phases or pulses, and repeated small explosions.

The phreatomagmatic eruptions can be moderately explosive. Eruptions that form maars and tuff rings are usually low (1-2) on the Volcanic Explosivity Index (VEI), but rarely may be as high as 3 or 4.

Maars and tuff rings are small volcanoes and are typically monogenetic because they form in areas where there is a limited magma supply.

Like the eruptions that form cinder cones, maar eruptions have a short duration, frequently only lasting a few days to a few months.

Maars and tuff rings may occur anywhere on land where surface water, shallow groundwater, or permafrost can interact with magma. Maars are common on volcanic islands, in some coastal areas, and in monogenetic volcanic fields in continental environments where there are wet low-lying areas or a high water table.

The Espenberg maars in Bering Land Bridge National Preserve (Alaska) formed in permafrost near Cape Espenberg adjacent to the Chukchi Sea and the Kotzebue Sound, see photo below. The maars in the Hopi Buttes volcanic field adjacent to Petrified Forest National Park (Arizona) formed in water-saturated sediments and playas between 8.7 and 6 million years ago in a continental environment in northern Arizona.

Features of Maars and Tuff Rings

Maars and tuff rings have wide craters with large diameters relative to the overall width of the volcanic landform. The craters are initiated as blast craters as country rock is removed by explosions. Some infilling of a crater occurs as pyroclastic material accumulates within it. Craters become progressively wider and deeper during eruptions, with some widening occurring via lateral collapse of crater walls.

Most maars and tuff rings are between 0.6 and 1.2 miles (1 and 2 km) in diameter. Devil Mountain maar, the largest of the Espenberg maars, has a diameter of more than 5 miles (8 km), which is only slightly smaller than the diameter of the Crater Lake caldera.

The Espenberg maar lakes are one of the most significant features of Bering Land Bridge National Preserve. These lakes approach 1,000 feet (300 m) deep. The oldest of these volcanoes, Whitefish maar, is between 100,000 and 200,000 years old. The youngest, Devil Mountain maar, is about 17,500 years old.

Base surges blast out laterally at the base of an eruption column during phreatomagmatic eruptions, with each explosion sending out another base surge. Base surges are dilute pyroclastic density currents that leave layered deposits, some include cross-bedding structures, similar to those in sedimentary rocks deposited by currents.

Photo (right): Base surge deposits on the rim of the Devil Mountain maar. The plane-bedded surge deposits were formed by base surges which are low-density pyroclastic flows. The explosion breccia contains rock fragments brought up from depth, and the scoria layer is composed of vesicular chunks of lava.
NPS Photograph by Chad Hults (NPS Alaska Regional Office).

Because tuff rings and maars are usually monogenetic, there should not be a risk of eruption at existing volcanoes of this type. But a new maar or tuff ring may form nearby if an eruption commences.

Geohazards on existing tuff rings or maars include rockfall.