This is where the nation comes to remember and where history is made. As “America’s Front Yard,” National Mall and Memorial Parks is home to many of our country’s most iconic memorials telling the story of people and events that shaped us as a nation. Each year, millions of people come to recreate, commemorate presidential legacies, honor our veterans, and make their voices heard.
Details
Duration
1-7 Days
Activity
Self-Guided Tours - Walking

From Ranger Programs to photography to recreational opportunities, the National Mall and Memorial Parks has it all!

Pets are allowed on the National Mall but are excluded from most memorials.

Service animals are allowed in all NPS facilities and on all trails unless an area has been closed by the superintendent to protect park resources.

All of the Sites within National Mall and Memorial Parks are FREE. The only exception is if you wish to reserve tickets ahead of time for the Washington Monument.

Note: The Washington Monument is currently closed for modernization of the elevator. Read More

Please use the links above to find directions that are specific to one of the National Mall and Memorials Park's sites.

Reservations
No
Season
Year Round
Time of Day
Any Time

The public may visit the sites of National Mall and Memorial Parks 24 hours a day (With the exception of the Washington Monument). Rangers are on duty at the sites to answer questions from 9:30 a.m. to 10:00 p.m. daily and to provide interpretive programs throughout the day and upon request.

Accessibility Information
Accessibility is a top priority for National Mall and Memorial Parks. Many of our facilities are historic and accessibility is not always ideal. However, we are always working to improve accessibility. We have established a parkwide Accessibility Coordinator. Your comments on accessibility areas for improvement are always appreciated. Please feel free to email us!
Learn more about handicapped parking
Braille Brochures
National Mall and Memorial Parks provides braille brochures of each of the memorials free of charge to onsite visitors. If possible, please feel free to email us or call 202-426-6841 to provide advance notice of your visit. Or visit the Survey Lodge Ranger Station to pick up copies upon your arrival. Brochures available include the Lincoln, Thomas Jefferson, Franklin Delano Roosevelt, Martin Luther King, Jr., Vietnam Veterans, and Korean War Veterans Memorial and the Washington Monument.
Closed Captioning
Closed captioning is available for the films in the Lincoln and Thomas Jefferson Memorials and the Washington Monument. If you do not see closed captioning on these films during your visit, please make the park ranger on-site aware or email us. We will rectify the situation immediately.
Large Print
A Large Print version of the Gettysburg Address is available at the Lincoln Memorial. Please see the park ranger on-site to pick up a copy.
ASL interpretation
American Sign Language interpretation is available by request (FREE). Please email us your ASL request at least 3 weeks prior to your visit.
Wheelchairs
All the major monuments and memorials are wheelchair accessible. There are a limited number of loaner wheelchairs available upon request and on a first come first served basis at the Korean War Veterans Memorial, Vietnam Veterans Memorial, Franklin Delano Roosevelt Memorial, and the World War II Memorial. Visitors wishing to borrow one will be asked to provide a form of ID that will be held until the wheelchair is returned.

Each year, millions of people visit the National Mall and Memorial Parks to recreate, to commemorate presidential legacies, to honor our nation's veterans, to make their voices heard, and to celebrate our nation's commitment to freedom and equality. From Ranger Programs to photography to recreational opportunities, the National Mall and Memorial Parks has it all!

After the First Federal Congress passed the Residence Act of 1790, President George Washington selected the exact site for the republic’s new federal government along the bank of the Potomac River. Secretary of State, and future president, Thomas Jefferson offered his assistance to President Washington's city planner Peter L'Enfant and eventually an impressive federal city emerged. 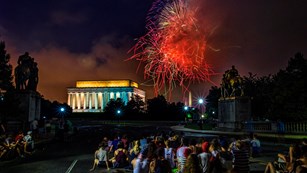 Visit the Lincoln Memorial for a variety of events year round. 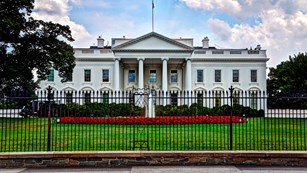 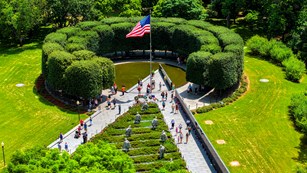 Explore the memorial that remembers those who answered the call to defend a country they never knew and a people they never met.

Scenic Views In the City