Crater lakes are volcanic lakes found in craters and calderas. Crater lakes usually form through the accumulation of rain, snow and ice melt, and groundwater in volcanic craters. Crater lakes can contain fresh water or be warm and highly acidic from hydrothermal fluids.

The most well-known of all volcanic lakes in national parks is Crater Lake in Oregon, which is also the deepest lake in the United States (and the ninth deepest lake on Earth) with a depth of 1,949 ft (594 m).

Lakes found in calderas may be large and long-lasting landscape features, while lakes in craters on active composite volcanoes are often intermittent, small, and very dynamic—matching the dynamics of those volcanoes themself.

Because they are subsidence features, calderas create depressions that can fill over time to become lakes.

Crater Lake’s caldera-forming eruption occurred 7,700 years ago. The lake probably took about 460 years to fill, but estimates based on precipitation rates range from 420 to 740 years.

On the other hand, Mount Katmai’s crater lake is quite young as the caldera formed in 1912 during the Valley of Ten Thousand Smokes eruption. Its lake level is still rising.

While caldera lakes are more stable than the small lakes in composite volcano craters, they are still subject to dynamic geologic forces and may drain through outburst floods, or changes to the caldera caused by subsequent eruptions or deformation.

Crater Lake is considered one of the most beautiful lakes in the world. The lake is known for its deep blue color, clarity, and beautiful setting in the forests of Oregon’s Cascade Mountains.

The diameter of Crater Lake is between 5 and 6 miles wide (8 to 10 km). The lake sits completely within the Crater Lake caldera with the lake surface approximately 1,000 ft (300 m) below the rim.

Crater Lake is a closed basin. No streams flow out of the lake. Precipitation is the primary source of water in the lake, although there is some groundwater input into the lake from springs. Water leaves the lake through evaporation and some seepage into the ground. Lake level can vary year-to-year depending on the amount of precipitation.

Mount Katmai Crater Lake in Katmai National Park and Preserve began to form soon after the 1912 eruption that formed the Valley of Ten Thousand Smokes.

It is not known whether the Katmai lake will continue to fill all the way to the rim or reach an equilibrium level the way Crater Lake has.

Kaguyak is a collapse caldera within a cluster of lava domes. It formed about 5,800 years ago. The islands in the lake are domes that were extruded after the caldera-forming eruption. The lake is about 500 ft (150 m) deep. 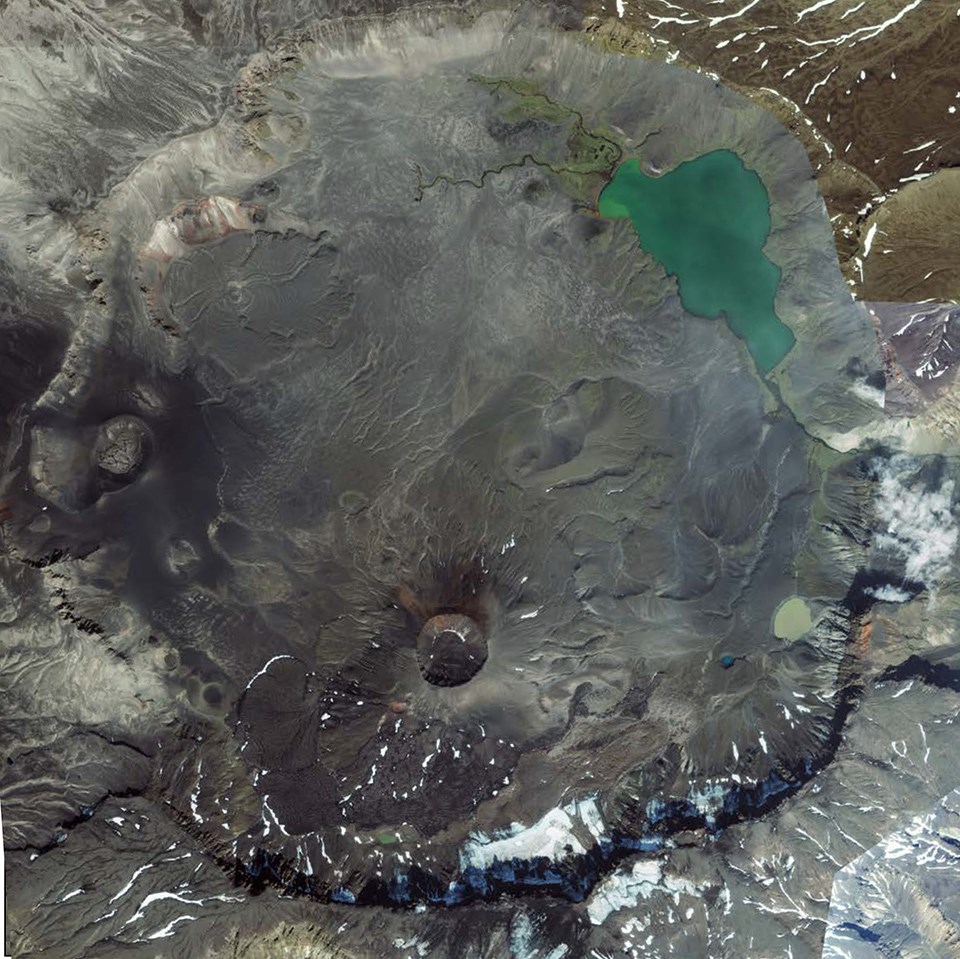 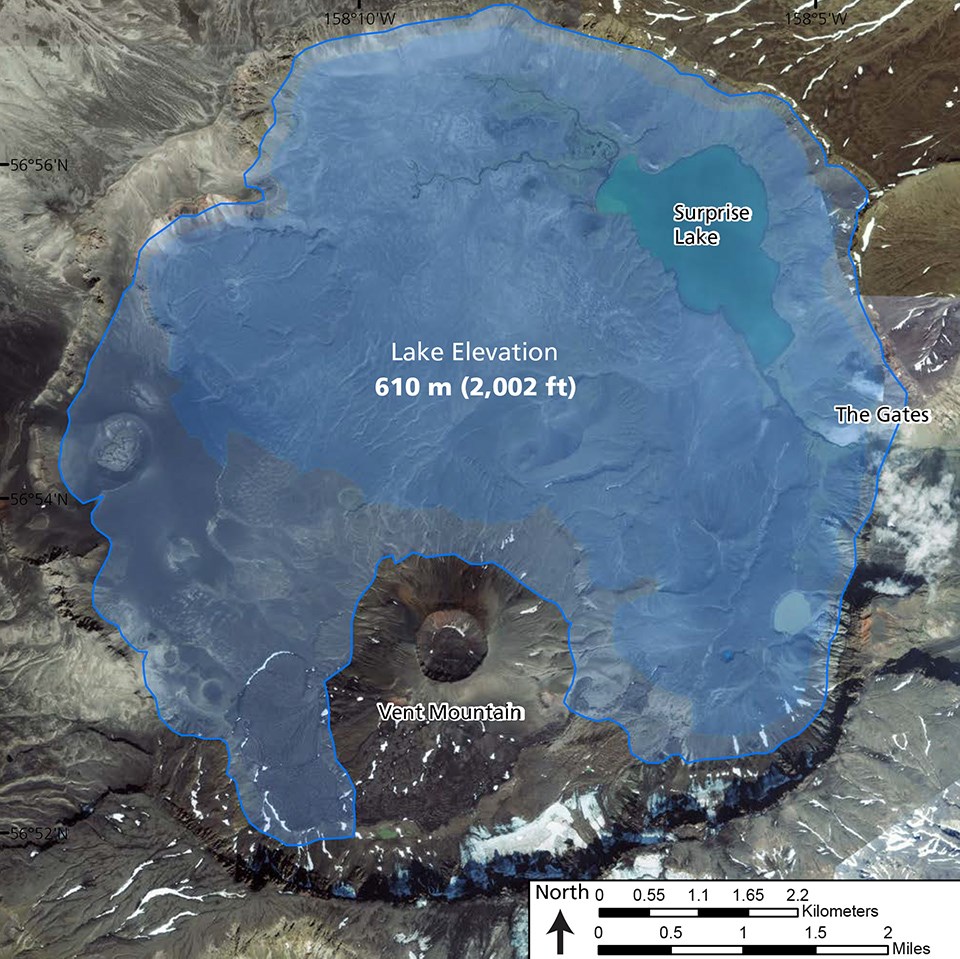 Right image
Aniakchak caldera viewed from above with outline of former crater lake.

A lake filled most of the 6.6 mi (10.5 km)-diameter Aniakchak caldera soon after it formed 3,660 years ago. Evidence for this lake includes wave-cut terraces on the wall of the caldera and features such as pillow basalts which indicate subaqueous eruptions.

Approximately 1,800 years ago, a great flood rushed out of the caldera through The Gates draining most of the lake and scouring the valley of the Aniakchak River, depositing large alluvial terraces and large boulders.

Surprise Lake is currently about 64 ft (19.5 m) deep and is the source of the Aniakchak River which flows into the Pacific Ocean. The lake is fed by warm springs and supports spawning and nursing habitat for sockeye salmon and arctic char.

Craters on active volcanoes are dynamic places and often change with each eruption and even between major eruptions.

The only composite volcanoes in NPS sites with active crater lakes are in Katmai National Park.

Visit the Maars and Tuff Rings page to learn about volcanic lakes found in maars.

Halema'uma'u, the pit crater in Kīlauea summit caldera, has been occupied at many points in its history by a lava lake (link article). But recently, from July 2019 until December 2020, it contained a short-lived water lake. The water in the lake was vaporized at the start of a new eruption. This lake was the first time Halema'uma'u contained surface water in at least 200 years.