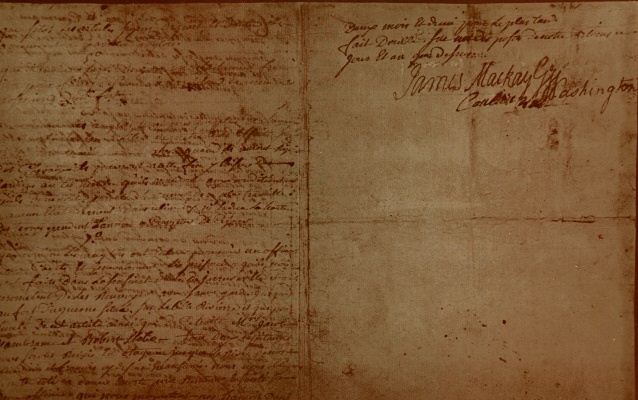 Guiding Question: What was George Washington's 1753 mission? How was Washington involved in the war? What was the confusion surrounding the surrender document at Fort Necessity? How did Benjamin Franklin help General Braddock?

Student Objectives:
·List three facts about Washington 1753 trip to Fort LeBoeuf
·List one event from the Battle at Fort Necessity, Braddock's campaign, and Forbes' campaign
·Identify the word in the Fort Necessity document that upset the British

“How Did the Conflict Begin?” Unit 3 of the Teacher’s Education Kit “The French and Indian War: 1754-1763” has the students focus on the beginning of the war. There are two lessons on George Washington and his involvement, a lesson on the surrender at Fort Necessity and a lesson on Benjamin Franklin and General Braddock.

Critical Content: George Washington was sent to ask the French to leave the disputed land in the Ohio River Valley. When they refused to leave, Virginia mounted a military campaign. Washington was in charge when the first shots were fired and at the first battle at Fort Necessity. The French won the battle at Fort Necessity and Washington is forced to surrender. The next year the British again try to expel the French. During this campaign Washington advised General Braddock, and Benjamin Franklin helped him secure supplies.

Use these two images when the lesson calls for a transparency.

We know a lot about George Washington as the first president and as the commander of the Continental Army, but what was he like as a young man? Where did he learn the skills he needed to succeed later in life? Find out what Washington experienced as a young soldier during the French and Indian War.

assassination - to murder someone for a political or religious reason.

Have passages prehighlighted with main idea or important information for students struggling with longer readings.

Have the students research what happened to the two prisoners the French took at Fort Necessity as part of the surrender agreement, Captain Stobo and Captain Van Braam.

George Washington did not have a formal education like the other founding fathers. He learned may of the skills he used later in his life from experience.  Have the students compare George Washington's education to the education they expect to get. Have them make a list of what type of skill he may have learned from his French and Indian War experience.