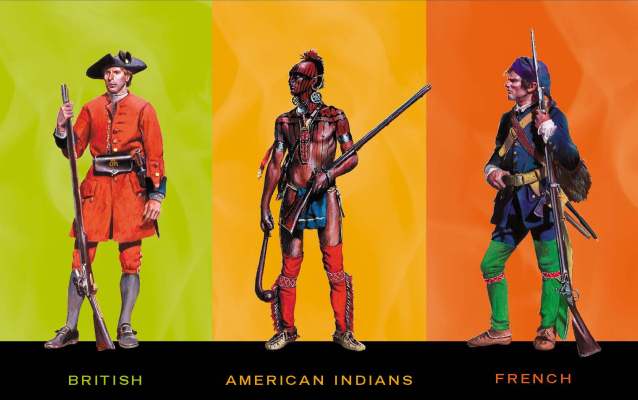 Critical Content: The thirteen British colonies were located along the Atlantic seaboard. The French colony of New France was located in what is now Canada and along the Mississippi River. Between them was the Ohio River Valley, a large area of land that both the French and the British claimed, but neither colony had settled. Many American Indians lived on this land. The three main nations living in the Ohio River Valley were the Seneca, Delaware and Shawnee. In 1753 the French began building forts on this disputed land and set the conflict into motion.

For the Forks of the Ohio lesson plan, the teacher should make copies of the map and the activity worksheet. The teacher will also need colored pencils or crayons for the students.

For the A Much Clearer Picture lesson plan, the teacher will need to make copies of the activity worksheet and determine what resources the students will use to research the Seneca, Delaware and Shawnee nations.

In 1753 the French colony of New France began building forts on land claimed by the British colonies. Many American Indians were living on the land. This started a war. Sometimes people think they own something and someone else does too. Write about a time you experienced a dispute over something or a time you heard about people fighting about who owned something.

The Forks of the Ohio lesson plan

1. Download the pdf of the lesson plan which includes the teacher instructions and the activity worksheets.

2. Download the teacher background from the Materials section and read pages 15-16.

5. Distribute crayons, the work sheet and map to the students

6. Have the students work independently to use the worksheet to correctly color and label the student map.

7. Discuss with the students the location of the French, the British and the American Indians. Also discuss how the building of the French forts would spark the French and Indian War.

The A Much Clearer Picture lesson plan

1. Download the pdf of the lesson plan which includes the teacher instructions and the activity worksheets.

2. Download the teacher background from the Materials section and read pages 15-16.

4. Read all the information with the students

6. Ask the students to use reference tools you have identified for them to research and write three new facts that add new information to their assigned paragraph. The new facts should be written in paragraph form. Have the students write down the sources for each of the facts.

7. Have the students read their original and new paragraphs to the class, turning what the Activity Worksheet gave them into “A Much Clearer Picture. Discuss the reference tools the students used. Which did they find the most helpful?

Forks of the Ohio: Where the Allegheny River and the Monongahela River come together to form the Ohio River. It is where the city of Pittsburgh is now located.

Assessment Unit 1: Who Were the People Involved?

The assessment includes a completed map as an answer key for the Forks of the Ohio lesson and a rubric. There is also a rubric for the A Much Clearer Picture lesson.

Download the assessment document for the answer key and two rubrics.

When teaching the Forks of the Ohio lesson, the teacher can help struggling students by asking them to complete fewer questions. The struggling learners can also have a completed map to copy.

When teaching the A Much Clearer Picture lesson, the teacher can help struggling students by asking them to add only one new fact.

Look at George Washington map of the Forks of the Ohio which can be found here. What did he emphasize? Why were these important to him?