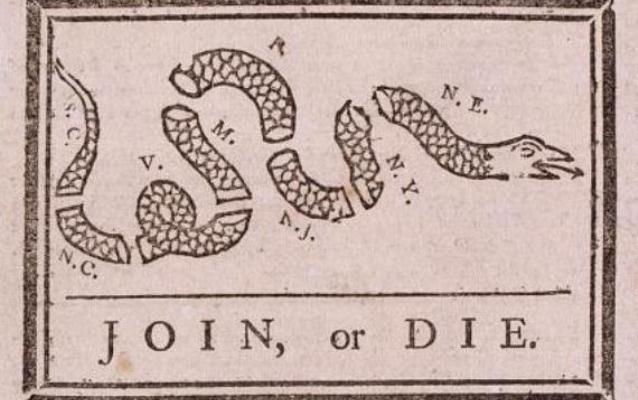 Guiding Questions: How did the French and Indian War set the stage for the American Revolution? What experience had the colonists gained? How had the political situation changed?

Project or print the map.

Download Lesson Plan- How Did the War Set the Stage For the American Revolution?

The teacher background gives the teacher the information needed to teach all the lessons in this curriculum.

This map will help the students understand the three cultures involved in the war and their geographical locations.

Lesson plan: Join or Die
1. What do you see? A chopped up snake
2. How many sections are there? eight.  What do the letters represent? The colonies with NE for New England, NY for New York, NJ for New Jersey, P for Pennsylvania, M for Maryland, V for Virginia, NC for North Carolina and SC for south Carolina.
3. What is the picture saying? The sections need to join together or they will die.
4. Why wasn't it popular at first? When the cartoon came out during the French and Indian war the colonists did not see any reason to join together. Later during the American Revolution they had a common enemy and the cartoon become popular.
5. What was one thing the colonists learned from the French and Indian War? That they could work together and be powerful.

Have the students make a list of generals in the Revolutionary War. Then have them research if they fought in the French and Indian War.