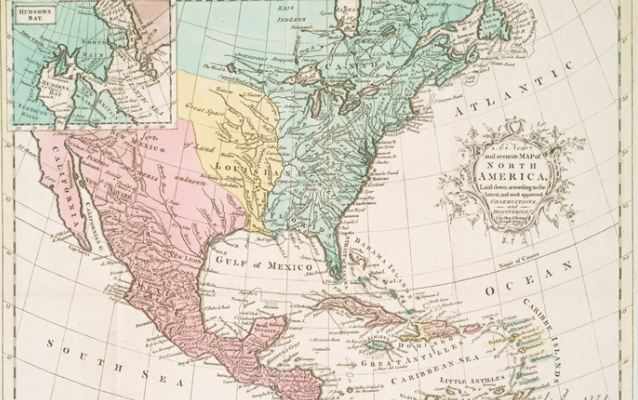 Guiding Question:  How did the French and Indian War end?  How did it spark Pontiac’s War?  What were the consequences of the Royal Proclamation of 1763?

This curriculum is available to teachers free of charge as a printed three ring binder or on CD. Please go to the receiving French and Indian War curriculum materials page for information.

The teacher should make copies of the Making Peace Activity Worksheet and the Treaty of Paris 1763: Before and After map.

The downloaded lesson plan includes an introduction (p 79), teacher instructions (p 80-81), the activity worksheets (p 82) and the map "Treaty of Paris 1763: Before and After."

At the end of the French and Indian War the British gained control of large amounts of land in North America. The American Indians had a treaty that said the British would not settle west of the Allegheny Mountains, but the British had also given some American colonists land grants, or permission to own and settle land, to that same land. At the same time the British changed their trade policies with the American Indians in a way that really hurt them. So the American Indians attacked the British, starting Pontiac’s War. Write about a time you thought something was settled only to have the solution cause another problem.

1. Review the time line with your students pointing out the events that led to the end of the war.

2. The Treaty of Paris, February 10, 1763, spelled out the terms for peace between Britain, France and Spain.

3. Give students copies of the maps Treaty of Paris 1763 Before and After.  Through questions and examination of the maps have the students determine the changes that resulted from the treaty.

6. Review what the students learned about the goals of the American colonists and the American Indians from the What Were They Fighting For? Unit 2 lesson plan.

7. Assign groups of students to be the British, American Indians and American colonists.

8. Challenge the groups to come up with their own treaty or solutions to the conflicts in the post-French and Indian War British colonies. Have them write their treaty down.

9. Have groups of students come together to negotiate a final treaty. Use the Activity Worksheet Making Peace to help the student find solutions as they negotiate.

Negotiate: To bargain with others in preparing for a treaty or when making a deal.

Treaty: A formal agreement between two or more states in reference to peace or other relations

Assessment Unit 5: How Did the War End?

Using the two maps “The Treaty of Paris Before 1763” and the “Treaty of Paris After 1763” have the students color the maps by nation. Have them create their own key for the Spanish, British, French, Disputed, and American Indian Reserve.

Have the students do additional research on the Proclamation Line of 1763 and Pontiac’s War.