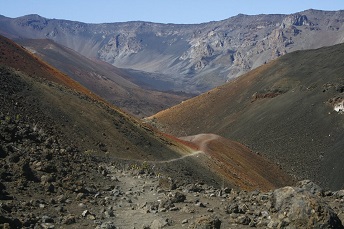 4-ESS2-2, 5-ESS2-1
Thinking Skills:
Remembering: Recalling or recognizing information ideas, and principles. Understanding: Understand the main idea of material heard, viewed, or read. Interpret or summarize the ideas in own words. Applying: Apply an abstract idea in a concrete situation to solve a problem or relate it to a prior experience. Analyzing: Break down a concept or idea into parts and show the relationships among the parts. Evaluating: Make informed judgements about the value of ideas or materials. Use standards and criteria to support opinions and views.

How were the Hawaiian islands created?

At the end of this lesson, the students will be able to describe the theory of geological processes that created the Hawaiian archipelago while demonstrating an understanding of terms and concepts associated with hotspot theory and plate tectonics.

Geology is the study of the Earth, its formation, composition and transformations. The Earth is composed of a series of layers: crust (plates), upper mantle, lower mantle, outer core, and inner core. The crust and the top of the mantle form a rigid layer called the lithosphere, which is broken into a number of pieces called plates. Beneath the lithosphere the mantle rock is hot and under pressure, making it soft and pliable. As the soft mantle circulates, the overlying plates are moved.

About 95% of Earth’s volcanoes and earthquakes occur at plate edges, known as plate boundaries. As an example, Mt. St. Helens in Washington is located in the Pacific “Ring of Fire” and is created by a convergent boundary. At convergent boundaries, where plates collide, dense oceanic plates sink under continental plates and melting results. At transform boundaries, the plates slide by each other causing earthquakes. At divergent boundaries, where plates move apart, magma fills the cracks making both plates grow. Hawai’i is located in the middle of the Pacific Plate which is moving northwest at a rate of about 4 inches per year.

Layers of the earth coloring worksheet

Earth’s rocky outer shell, or crust, is not as solid as you might think. It is actually made of many huge pieces of rock known as tectonic plates. These plates are slowly moving and shifting. The plates ride on currents of molten rock in the upper mantle which is very hot and under tremendous pressure. The mantle is thought to be a soft, yet solid material kind of like butter that has been left out on the table. The outer core, which begins more than 1,800 miles beneath the surface, is hot molten liquid, while the inner core is most likely solid due to the extreme high pressure in the center of the Earth.

Step 2: Layers of the Earth Worksheet

There are 8 major tectonic plates that make up the Earth’s crust. Explain that each plate is named according to its geographic location. Instruct students to label the plates using the list provided at the top of the worksheet.

Step 4: Review worksheet and point out other features on the map.

o Point out that that each plate has arrows, indicating the direction the plate is slowly moving.
o Review North, South, East, and West and ask questions about the direction of different plates.
o The Pacific plate is moving northwest.

o Where are the majority of volcanoes located?
o Notice the concentration of volcanoes along the plate boundaries.
o Have students speculate as to why.
o About 95% of Earth’s volcanoes and earthquakes occur at plate edges, known as plate boundaries.
o Explain the great amount of force involved when giant plates collide into each other. What geologic features might this cause and why? = Trenches, volcanoes, and mountains.

Convergent boundary: Boundary where plates are colliding into each other.

Core: The center of the Earth, about 2,200 miles thick; made up of an inner and outer core.

Crust: The outer layer of the Earth, about 2-25 miles thick; crust is thicker under the continents and thinner under the oceans.

Divergent boundary: Boundary where plates are moving apart from each other.

Mantle: Layer of molten rock between the crust and the Earth’s core, about 1,800 miles thick.

Molten: Liquefied by heat, usually referring to lava or magma.

Tectonic plates: Theory of the Earth’s crust being broken into a series of plates in motion.

Transform boundary: Boundary where plates are sliding by each other.