Women first organized and collectively fought for suffrage at the national level in July of 1848. Suffragists such as Elizabeth Cady Stanton and Lucretia Mott convened a meeting of over 300 people in Seneca Falls, New York. In the following decades, women marched, protested, lobbied, and even went to jail. By the 1870s, women pressured Congress to vote on an amendment that would recognize their suffrage rights. This amendment was sometimes known as the Susan B. Anthony Amendment and became the 19th Amendment.
The amendment reads:

Although the women’s rights movement was born in New England, women first won suffrage victories in the West. In the Dakota Territory, women were able to vote in school elections beginning in 1883. Legislation that would have provided full suffrage to women lost by one vote in 1875. A similar bill passed the territorial legislature in 1885 but was vetoed by the territorial governor, Gilbert Pierce. If Governor Pierce had not struck down the law, women from the Dakota Territory would have joined those in the Wyoming and Utah territories in winning voting rights on the same terms as men.

When South Dakota became a state in 1889, the new state constitution included the word “male” in the section designating voting eligibility. However, it also called for the new state legislature to send a proposed state constitutional amendment to the voters in 1890 which would extend voting eligibility to women. Susan B. Anthony embarked on a speaking tour of South Dakota to campaign for the amendment and set up an office there. Many other national suffrage leaders like Anna Howard Shaw and Carrie Chapman Catt toured the state as well. But the amendment was defeated by the voters. Similar amendments in 1895 and 1898 did not pass the legislature.

Many prominent men and women of South Dakota supported woman suffrage. Congressman John Pickler, who as a member of the territorial legislature introduced a woman suffrage bill in 1885, was nicknamed “Petticoats Pickler” because of his work along with his wife Alice for the vote. The Picklers also worked for the Women’s Christian Temperance Union (WCTU) and the two causes were often discussed together. Emma Smith Devoe was a dedicated advocate for both temperance and woman suffrage. She and her husband John were founders of the South Dakota Equal Suffrage Association in 1890. Emma set up local chapters all over the state. She and John moved away shortly after the defeat of the 1890 measure, but Emma continued to fight for suffrage in several other states and sent letters of encouragement back to the suffragists in South Dakota during their continued campaigns.

Suffragists often cited the state’s motto, “Under God the People Rule” to which they would add “Women Are People” when arguing for women’s enfranchisement. Campaigns were difficult because South Dakota was sparsely populated; traveling around for speaking and education tours could be physically demanding. Fundraising was always a challenge. Organizing for the vote waned as one measure after another went down in defeat.

A New Way for Suffrage in South Dakota

In the twentieth century, there was a resurgence of suffrage activism in South Dakota. Mary Shields “Mamie” Pyle organized the South Dakota Universal Franchise League in 1911 after another woman suffrage referendum was voted down in November 1910. Pyle, who had never worked for temperance, distanced the suffragists from the WCTU, believing that combining the two issues had hurt the suffrage movement in the past. This strategy would help neutralize the arguments of influential anti-suffrage organizers in the state who were tied to the liquor industry. The League started a newspaper called the South Dakota Messenger, edited by Ruth B. Hipple, to spread the word about women’s rights. The Messenger could reach people in remote areas that were difficult for speakers to visit. Although a suffrage amendment was again defeated in 1914, the election results suggested that support for women’s right to vote was growing.

The 1916 ballot in South Dakota included both prohibition and woman suffrage amendments. Emma Smith Devoe returned to the state to campaign. The prohibition amendment passed; the woman suffrage amendment did not. Two years later, another state constitutional amendment passed the legislature and was sent to the voters. This one, called the Citizenship Amendment, revised voting eligibility in the state. It added the requirement of U.S. citizenship (which had not been required before) but removed the word “male.” When the amendment passed in November 1918, women in South Dakota were finally eligible to vote under the same terms as men.

After decades of arguments for and against women's suffrage across the country, Congress finally passed the 19th Amendment in June 1919. After Congress approved the 19th Amendment, at least 36 states needed to vote in favor of it for it to become law. This process is called ratification

On December 4, 1919, South Dakota voted to ratify the 19th Amendment. By August of 1920, 36 states (including South Dakota) ratified the amendment, ensuring that across the country, the right to vote could not be denied based on sex.

Built in 1904, the Brown County Courthouse in Aberdeen, South Dakota was the center of political life in the county. On June 18, 1909, the South Dakota Equal Suffrage League held a convention at the courthouse. The courthouse is listed on the National Register of Historic Places and is open for tours by appointment. 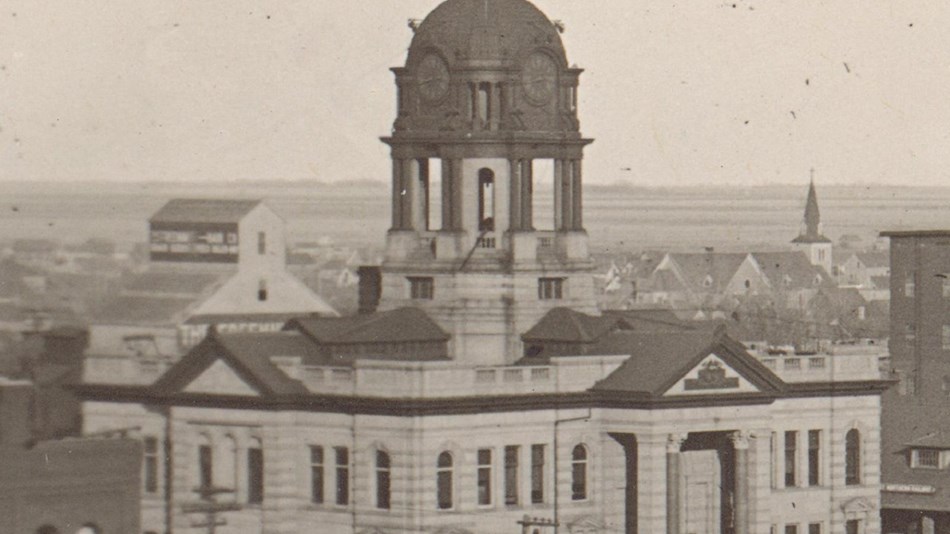 Brown County Courthouse is an important place in the story of ratification. It is listed on the National Register of Historic Places.