Adventure, respect, dignity. These are just three of the reasons that thousands of African American men enlisted in the US Army shortly after the Civil War. They sought out this opportunity, which opened to them in 1866 when Congress passed legislation giving African Americans the right to serve in the Regular Army. These men who would become known as the Buffalo Soldiers went on to establish a legacy that continues to inspire countless Americans to this day. At Charles Young Buffalo Soldiers National Monument in Wilberforce, Ohio, the iconic stories of these intrepid men are forever protected so that their legacy and stories will be retold for countless generations to come.

While the Buffalo Soldiers' legacy began on the vast Western frontier during the “Indian Wars,” the home to the National Park Service’s Buffalo Soldiers’ story stands on a small parcel of land in west-central Ohio. Although it may seem insignificant at first, upon closer examination, this relatively small site bursts at the seams with African American history. A grand, two-story home is the main feature of the 60+ acre site. Known as Youngsholm, it was once home to arguably one of the most important and influential Buffalo Soldiers in history, Charles Young.

The third African American graduate of the US Army Military Academy at West Point, Charles Young would go on to become the highest-ranking Army officer during his years as a Buffalo Soldier. He overcame stifling inequality throughout his personal and military life. In doing so, he earned the respect of his racial counterparts and peers. His life would set an example and pave the way for future generations of African Americans to follow in his footsteps.

Early in his Army career, he received a detached service assignment to teach the newly established Military Sciences and Tactics courses at Wilberforce University in Wilberforce, Ohio. It was an assignment that would shape his life and Young would eventually put down roots in Wilberforce despite having to travel throughout the United States and the world as an Army Officer in the ranks of the Buffalo Soldiers. The last home he purchased in Wilberforce would become the cornerstone of what we know today as Charles Young Buffalo Soldiers National Monument.

As the park embarks on a massive multimillion-dollar renovation to the home and surrounding land that will result in the home being closed for an extended period and visitor services being moved to an offsite location, visitors are encouraged to visit the park’s nearby partner, the National Afro-American Museum and Cultural Center. Located only a few miles down the road on the Central State University campus, the museum boasts a fine collection of early Buffalo Soldiers artifacts relating to Charles Young and other notable Buffalo Soldiers, particularly Benjamin O. Davis, Sr. Davis, Sr. would become the first African American brigadier general in the US Army after being mentored by Charles Young early in his military career. The museum also houses various other significant African American collections that are on display for visitors to browse.

We also encourage visitors to engage with park staff on the park’s website and on the park’s social media pages on Facebook and Twitter. Virtual visitors will find regularly-updated Buffalo Soldiers history and facts. They can also find accurate information about the Buffalo Soldiers along with links for historical resources and partners, including the Colonel Charles Young Foundation, whose purpose is to promote and foster civic involvement and leadership development among youth based on the legacy of Colonel Charles Young.

The park’s short introductory film A Triumph of Tragedy: The life of Charles Young is also available online for viewing at any time. In need of suggestions when planning your visit to the site? Feel free to browse the Things To Do section of the website. Staff will be conducting events in and around the community and all scheduled events will be listed on the park calendar and on our social media pages. 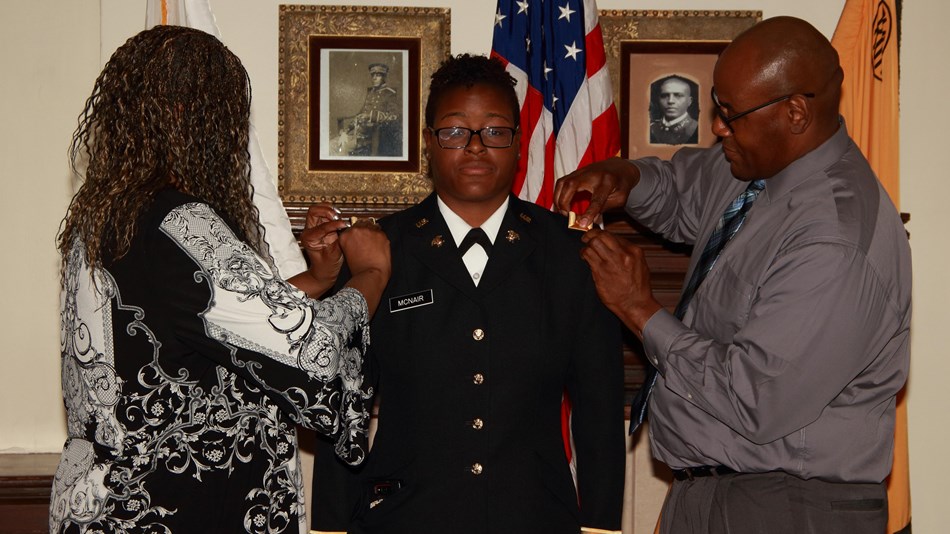 Experience events and activities at the monument and explore the legacy of Charles Young and the Buffalo Soldiers through photo collections.