Norris is one of the hottest and most acidic of Yellowstone’s hydrothermal areas. It is part of one of the world’s largest active volcanoes. Many hot springs and fumaroles here have temperatures above the boiling point (200ºF / 93ºC).

Water fluctuation and seismic activity often change features. Norris is near the intersection of three major faults. One runs from the north; another runs from the west. These two faults intersect with a ring fracture from the Yellowstone Caldera eruption 640,000 years ago. These conditions helped to create this dynamic geyser basin.

Notes: Thermal activity throughout this entire area. Stay on the boardwalks and designated trails at all times.

The trails through the geyser basin are a combination of boardwalks, paved paths, and unpaved paths.

The trail leading from the Norris Geyser Basin Museum & Information Station down into both basins is steep and uneven.

Each year at Norris new hot springs and geysers appear; others become dormant. Geologic events trigger many of these changes. Even small earthquakes can alter hydrothermal behavior. Some transformations are brief; others last longer. Geysers and hot springs may also change. The chemistry of some of the Norris hot springs dissolves underground rock. In other Norris hot springs, hot water moves toward the surface, depositing dissolved minerals along subterranean passages and around the surface vents. Sometimes, these deposits can choke off the flow of water. New features may be born as hot, pressurized water seeks a new route to the surface.

Clear pools can become muddy and boil violently, and some may temporarily become geysers. Geysers cease erupting or have altered cycles. New features appear. This sudden activity is Norris Geyser Basin known as a “thermal disturbance” and can last a few days, or more than a week. Gradually, most features return to “normal.”

Why this happens is not fully understood. Norris has the greatest water chemistry diversity among Yellowstone’s hydrothermal areas. Multiple underground hot water reservoirs exist here and as their water levels fluctuate, concentrations of chloride, sulfate, iron, and arsenic change. Although Norris is known for its acid features, it also has alkaline hot springs and geysers. As underground water and chemistry shift suddenly, they could contribute to dramatic changes in minerals and pH. Further study will help unravel this mystery.

The Colors of Norris

Many of the colors you see here are evidence of thermophiles (heat-loving microorganisms) and their activity.

Color within thermal water changes, in part, because temperatures and chemistry change. For example, in a hot spring the hottest water is closest to the source vent. As the water flows out, it gradually cools. This range of water temperature, called a thermal gradient, supports various thermophilic habitats.

Chemical composition also changes as water flows from thermal features, mixes with other water sources, and is diluted or concentrated. As temperatures or chemical compositions change, microbial populations—and the colors they create—shift to a location they favor.

Like other hydrothermal areas in Yellowstone, Norris provides a warm respite from winter for bison and elk. They can also find plants growing here year-round and water to drink.

Norris Geyser Basin is home to many insects associated with thermophiles. It also provides habitat for colorful dragonflies. Look for them in grassy areas near Crackling Lake in Porcelain Basin and Puff ‘n Stuff Geyser in Back Basin.

Killdeer nest on bare ground and will call in alarm if visitors are close by. Also, swallows fly over the basin catching insects to eat. 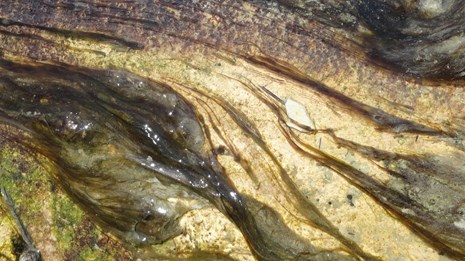 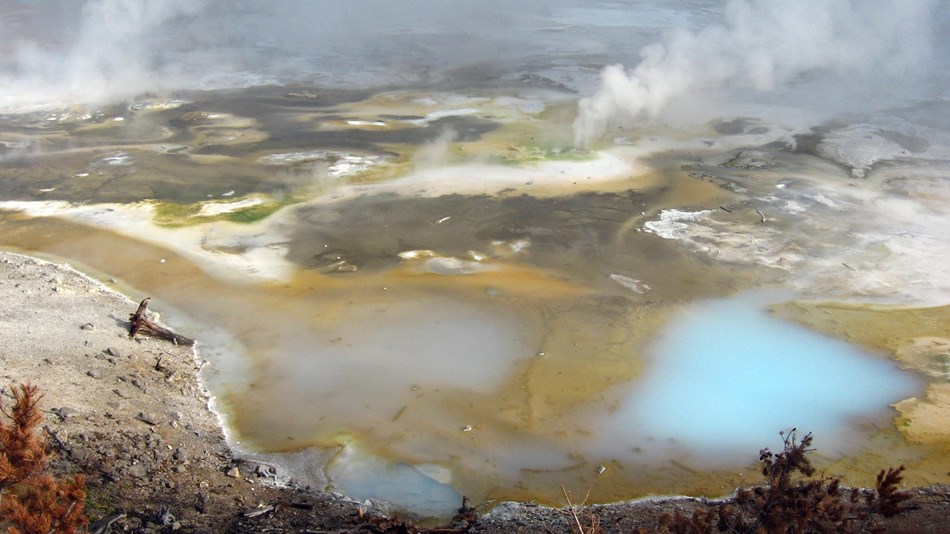 Explore the sights of Norris Geyser Basin, and see some features as they appeared in the past.

Protect Yourself & Protect the Features

Hot Water • Thin Crust
Hydrothermal features are fragile rarities of nature. Yellowstone preserves the largest collection of hydrothermal features on the planet. You have an unparalleled opportunity to view hot springs, geysers, mudpots, and fumaroles in a natural setting. In order to protect these rarities for future enjoyment, please:

More on Day Hikes in Yellowstone 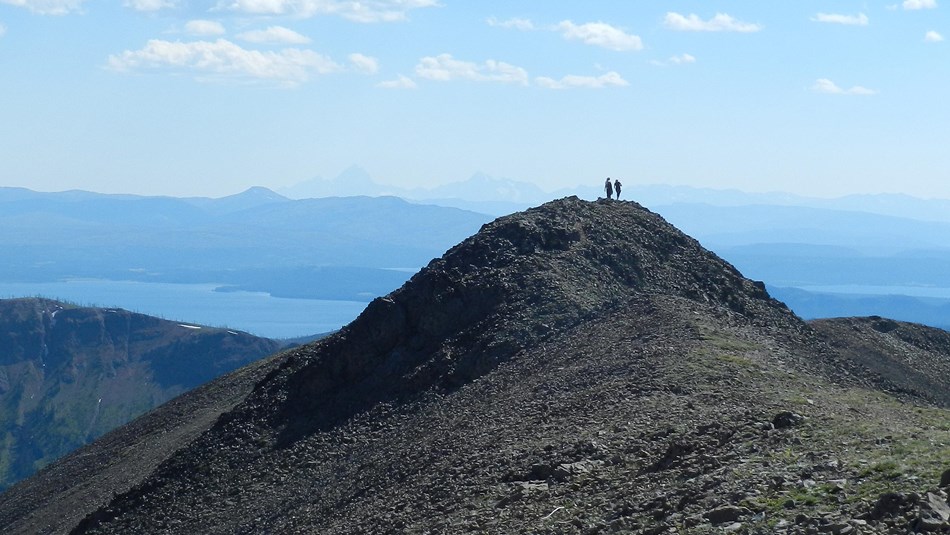