DEATH VALLEY, CA – The National Park Service (NPS) has completed its final environmental reviews of proposed projects to repair flood damage at Scotty’s Castle. Meanwhile, work has already started on projects approved earlier. The popular historic site could be partially open by late 2020 and is expected to be fully open by late 2021.

A severe flash flood on the night of October 18, 2015 sent water, mud, and rocks rushing down Grapevine Canyon. The flood broke through the walls of the historic Garage, in use by the NPS as the site’s visitor center, and filled it with four feet of debris. Two other historic buildings were damaged by the flood. The main house escaped the path of the flood, but bore lesser damage from water intrusion from heavy rain.

The NPS prepared two environmental assessments (EAs), each of which addressed different proposed actions to repair flood-damaged infrastructure in Grapevine Canyon. The Bonnie Clare Road Reconstruction EA was finalized in May 2018, and approved proposals to reconstruct 7.6 miles of Bonnie Clare Road, install 4,000 feet of waterline under the road, reconstruct damaged portions of the historic concrete and wire fence, and stabilize the historic bridge and gatehouse.

Road and Highway Builders started work in December 2018 on all four of these projects under contract managed by Federal Highways Administration. 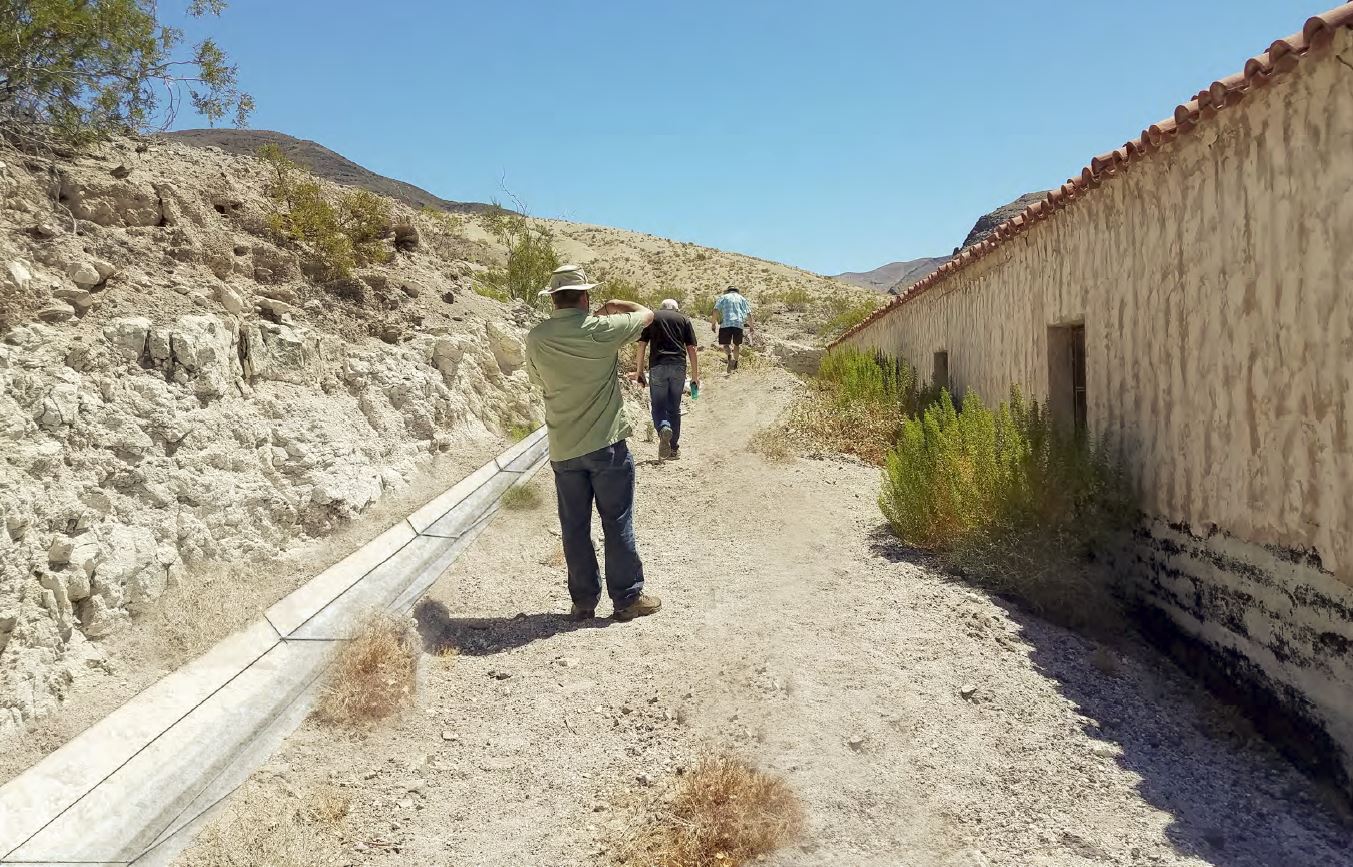 “This is where things can get tricky,” said Abby Wines, spokesperson for Death Valley National Park. “Sometimes we have to make trade-offs. In a few cases, we are proposing significant changes to the historic district in order to protect the historic district. A purest might say that we shouldn’t build any berms, flood walls, or shallow channels because they weren’t in the historic district during the 1920s. But if we don’t build flood control structures, we risk losing a lot more in the next major flood. It would be great if we could magically protect the site without changing a thing, but it’s not possible.”

If things go smoothly, several major contracts should be awarded within the next 6 months.

The EA and Finding of No Significant Impact documents can be viewed at https://parkplanning.nps.gov/castle.

Death Valley National Park is the homeland of the Timbisha Shoshone and preserves natural resources, cultural resources, exceptional wilderness, scenery, and learning experiences within the nation’s largest conserved desert landscape and some of the most extreme climate and topographic conditions on the planet. About two-thirds of the park was originally designated as Death Valley National Monument in 1933. Today the park is enjoyed by about 1,600,000 people per year. The park is 3,400,000 acres – nearly as large as the state of Connecticut.