Pennsylvania was a center of women's rights activism even before the Seneca Falls Convention in 1848. Women involved in the robust abolitionist movement in the state found themselves criticized by male reformers for speaking in public and participating in other activities considered unwomanly. Lucretia Mott and an interracial group of Pennsylvania women organized the Philadelphia Female Anti-Slavery Society in 1833. The Society sent Lucretia Mott as a delegate to the World Anti-Slavery Convention in London in 1840 to challenge the organizers' exclusion of women delegates. Pennsylvanians Angelina and Sarah Grimke were among the first to write and speak on the cause of women's equality as early as 1838. The sisters moved to Pennsylvania after leaving their home state of South Carolina because of their opposition to slavery.

After the 1848 Seneca Falls Convention, Pennsylvanians continued their involvement in the movement for women's rights, including the right to vote. The Philadelphia Female Anti-Slavery Society held one of the early women's rights conventions in 1854. A number of woman suffrage groups organized in the state and focused their attention on raising awareness of the suffrage cause. Carrie Burnham attempted to vote in 1871. After she was denied, she took her case to the Pennsylvania Supreme Court, arguing that voting was a right of citizenship. She lost the case, and the Pennsylvania constitution was subsequently amended to limit voting rights to "male citizens."

Amending the state constitution again to include woman suffrage required the passage of a resolution through two sessions of the legislature and then ratification by the state's voters in the next election, a multi-year process. Beginning in 1911, woman suffrage groups lobbied for such an amendment vigorously. The amendment passed the legislature in 1913 and went to the voters for ratification in 1915. Katharine Wentworth Ruschenberger, in collaboration with the Pennsylvania Woman Suffrage Association, funded the creation of a replica of the Liberty Bell in support of this effort. Christened the Justice Bell, its clapper was secured with chains so that it could not ring until women won the vote. The Justice Bell toured the state in 1915 to win support of ratification of the state amendment. It was expected that it would ring out in victory in Philadelphia once the election results came in. But the Justice Bell stayed silent; the referendum went down in defeat.

In 1913, the Woman Suffrage Procession in Washington, D.C. reinvigorated the push for a national amendment enfranchising women. Many Pennsylvania women joined the efforts to lobby for this amendment. A number participated in the more confrontational tactics of the National Woman's Party, including picketing the White House and going on hunger strikes.

After decades of effort on the local and national level by woman suffragists, Congress finally passed the federal woman suffrage amendment in June 1919. After Congress approved it, at least 36 states needed to vote in favor of the amendment for it to become part of the U.S. Constitution. This process is called ratification.

On June 24, 1919, the Pennsylvania legislature voted to ratify the Nineteenth Amendment. By August of 1920, 36 states (including Pennsylvania) approved the Amendment, making women’s suffrage legal all across the country.

Rittenhouse Square, a public park in Philadelphia, was the site of one of the state’s first suffrage marches. Inspired by Alice Paul’s newly formed organization, the Congressional Union (CU), suffragists in Philadelphia protested in Rittenhouse Square in 1914. They then marched down Market Street to Washington Square where they concluded the demonstration. Rittenhouse Square is listed on the National Register of Historic Places. An earlier Pennsylvania suffrage march took place during the Perry Centennial celebration on July 8, 1913 in Erie, Pennsylvania. A plaster replica of the Justice Bell was featured in the march.[1] 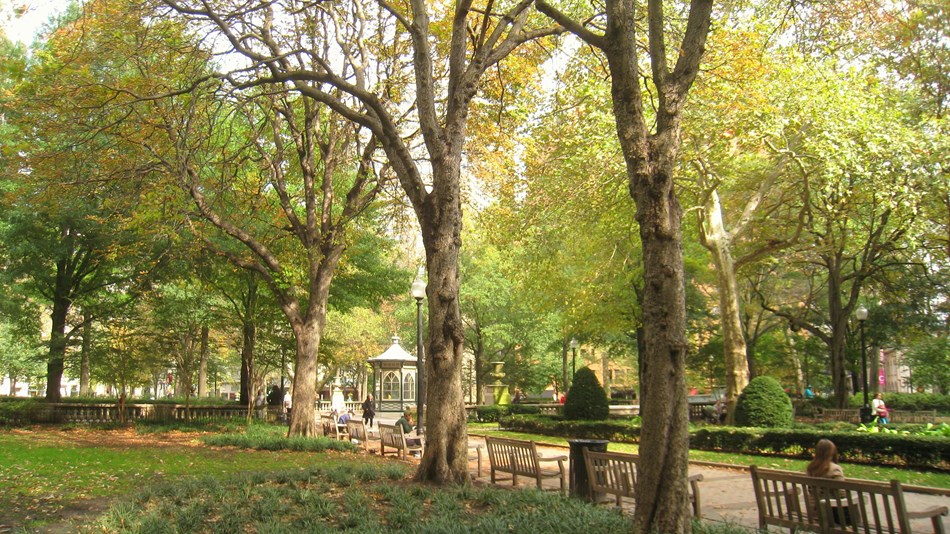 Rittenhouse Square is an important place in the story of ratification. It is listed on the National Register of Historic Places.