"Began my visits (December 21, 1862) among the camp hospitals in the Army of the Potomac, under General Burnside. Spent a good part of the day in a large brick mansion [Chatham] on the banks of the Rappahannock, immediately opposite Fredericksburg. It is used as a hospital since the battle, and seems to have received only the worst cases...In the dooryard, toward the river, are fresh graves, mostly of officers, their names on pieces of barrel staves or broken board, stuck in the dirt..."
-Walt Whitman, The Wound Dresser

The Chatham Manor house stands overlooking the Rappahannock River and the city of Fredericksburg, Virginia. The house was named after William Pitt, the Earl of Chatham. The grand manor house, built between 1768 and 1771 by William Fitzhugh in the Georgian-style, was the center of a large, thriving plantation for many years.

The Chatham Manor landscape, now part of Fredericksburg and Spotsylvania National Military Park, represents the core of what was once a vast estate amassed by the Fitzhugh family beginning in the early eighteenth century. During the American Civil War, Chatham served as a Union headquarters and field hospital. The property was host to many noteworthy visitors before, during, and after the war. Some famous visitors include George Washington, Thomas Jefferson, and Abraham Lincoln. In addition, Walt Whitman and Clara Barton (who later went on to found the American Red Cross) were volunteers among army surgeons at the manor’s field hospital during the American Civil War.

Following the Civil War, owners made extensive renovations to the grounds, including a new walled garden and a kitchen garden.

The Fredericksburg/Falmouth area was home to several Algonquian-speaking tribes that were part of the Powhatan alliance, who developed a series of permanent villages and seasonal camps along the Rappahannock River where they lived, farmed, hunted, and fished. Other tribes belonging to the Siouan and Iroquoian language groups lived in the Chesapeake region as well. The features of the landscape that are present today represent the documented period of signifcance for the park, 1768 to 1965, beginning with the Fitzhugh ownership and construction of the manor house in 1768 by William Fitzhugh, on land inherited from his father. 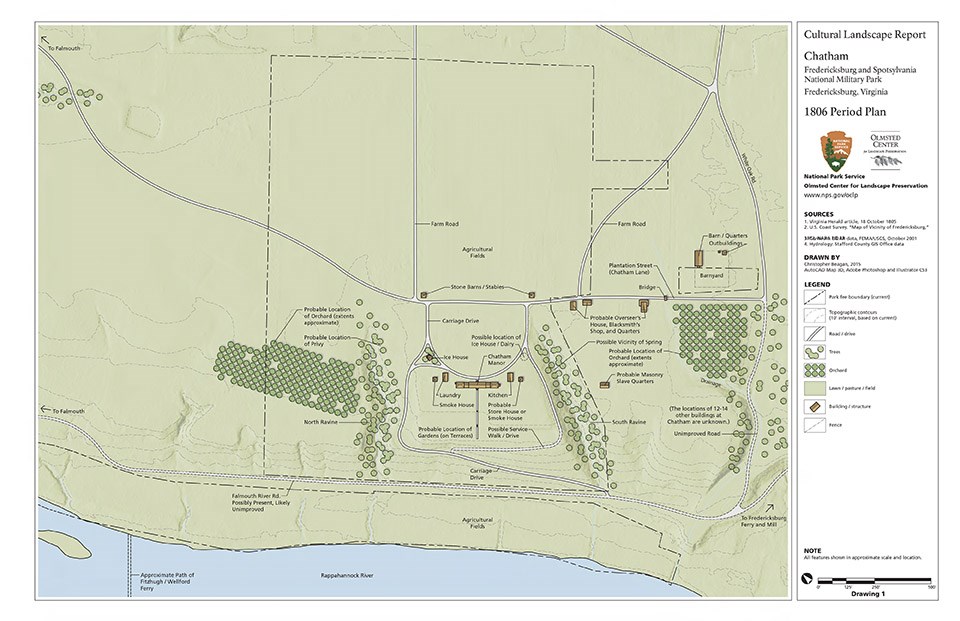 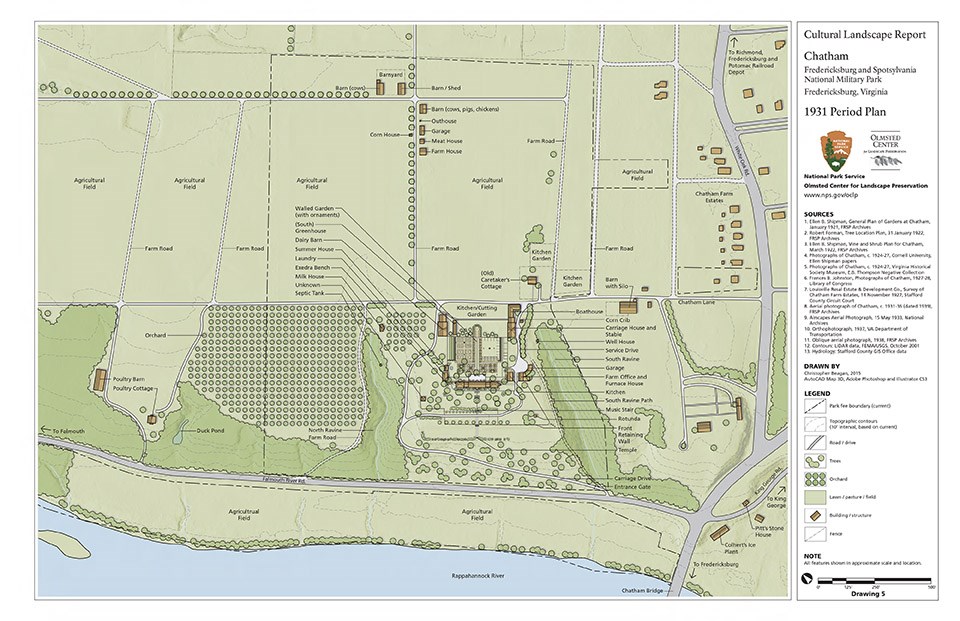 Take a closer look at landscape plans, alongside narrative description of the landscape development, in the Cultural Landscape Report for Chatham Manor.

Early landscape improvements reflected the infuence of both English precedents and other Tidewater plantations. These included the terraced gardens on the river side of the house, planted with tulip poplars, and a crescent-shaped entrance drive on the land side of the house. Fitzhugh’s plantation prospered under the labor of enslaved people. Fitzhugh also established a Rappahannock River ferry crossing, better connecting the plantation with the young settlement of Fredericksburg nearby. From the wharves at Fredericksburg and Falmouth, Chatham was connected to the Chesapeake Bay, its tributaries, and the international trade routes of the 1700s.

Between 1806 and 1857, the propertry passed through the hands of several owners, related by blood or by marriage. When Major Churchhill Jones purchased Chatham in 1806, the site included 1,288 acres and operation of the plantation relied upon sixty-seven enslaved people. Owners during this period focused on in expanding the commercial prospects of Chatham, evidenced through the operation of the plantation and the mill along Claiborne’s Run and the construction of a toll bridge across the Rappahannock.

The next chapter in Chatham's landscape history begins with J. Horace Lacy’s acquisition in 1857 and continues to the end of the American Civil War. Lacy's ownership of Chatham marks a period of the most dramatic changes to the plantation since its construction. Prior to the Civil War, Lacy improved both Chatham’s garden and fields as he rode the wave of scientifc farming that swept the nation in the 1850s. Census records from 1860 show diversifed production at Chatham during this period.


Lacy joined the Confederate forces in 1861, leaving Chatham open to occupation by Union forces, who arrived in April 1862 under the direction of General Irvin McDowell. By that time, retreating Confederates had burned Chatham Bridge. The Union forces were initially respectful of Chatham and its grounds, establishing their encampment on the land side of the house in advance of the Battle of Fredericksburg, which occurred in December 1862. Artillery flanked the house, and the house served as a field hospital. Following a Union defeat, winter encampments were established near Chatham, which by this time had been heavily damaged by Union occupation.

During the Second Battle of Fredericksburg, in May of 1863, Chatham would again serve as a Union headquarters and field hospital. By the war’s end, Chatham, along with its grounds, gardens, and fields, were ravaged, with the surrounding landscape generally denuded of vegetation.

The first narrative descriptions of Chatham appear in the 1830s. This coincided with the American Romantic period of design, when naturalistic plantings eclipsed the rigid symmetry of Colonial style gardens.

Chatham's owners between 1920 and 1975, General Daniel and Helen Devore and John Lee and Lilian Pratt, made extensive renovations to the estate’s grounds. In the 1920s, Helen Devore commissioned Ellen Shipman was commissioned to design an extensive new walled garden and kitchen garden for the land side of the house, and a new approach on the river side.

Ellen Shipman was one of three major women landscape architects in the first wave of twentieth century landscape architecture. Planting in the walled garden was characterized by Shipman’s distinctive labor-intensive planting of perennial beds near the house, combined with a relaxed, irregular planting of wildflowers and perennials punctuated with vertical elements in the form of miniature fruit trees, standard wisteria, and fastigiate evergreen shrubs.

Between 1964 and 1993, the National Park Service acquired 85.01 acres of Chatham Estate, and the site opened to the public on October 15, 1977. The Chatham Manor landscape is part of Fredericksburg and Spotsylvania National Military Park, located in Stafford County, Virginia. Established in 1927, the 8,380-acre military park preserves and commemorates four major Civil War battlefields (Fredericksburg, Chancellorsville, Wilderness, and Spotsylvania Court House), as well as the "Stonewall" Jackson Death Site.
After opening, the National Park Service continued to make improvements to facilitate visitor use and interpretation at Chatham Manor, including repairs to greenhouses and an extensive “adaptive restoration” of the walled garden during the 1980s. Although the condition of the restored garden waned between the late 1980s and early 2000s, research supported by the Garden Club of Virginia and maintenance assistance from the park friends group returned the garden to fair condition.

Many landscape characteristics and features from the nearly 200-year period of significance remain at Chatham Manor. These include topography and natural systems, spatial organization and land use, circulation, vegetation, buildings and structures, views and vistas, constructed water features, small-scale features, and an archeological site. Key features that remain from the period of significance include the Chatham Manor house and its principal dependencies, distinctive terracing along the river side of the house, the property’s physical and visual relationship with the Rappahannock River and city of Fredericksburg, agricultural uses that have characterized the property for the majority of its history, and the walled Garden on the land side of the house, which is a late, but significant, addition to the landscape history of the property.

Today, Chatham serves as the park’s administrative headquarters and is open to the public daily. The former residential and agricultural uses of the landscape remain visible on the grounds, including support buildings and structures, carriage drives and brick walks, terraced gardens and statuary, and shade trees and woodlands. There are also several Civil War graves and a replica pontoon bridge. Several trees at Chatham Manor date to the time of the Civil War battle. Chatham is well-visited by local schools, residents, and neighbors, as well as visitors from around the globe. The Friends of Chatham, established in 2012, is the property’s most active partner, providing for advocacy, financial support, and community engagement.

Chatham Manor, a component cultural landscape of Fredericksburg and Spotsylvania Landscape, is significant over the period 1768 to 1965.

Chatham is nationally significant in the area of Military History for its recurring role in the American Civil War as a theater of military action from April 1862 to April 1865, including the Battle of Fredericksburg in December 1862. Located between the Federal capital in Washington and the Confederate states’ capital in Richmond, Fredericksburg was poised be a key battle of the American Civil War. The flats below Chatham served as a pontoon bridge landing, which provided an essential function after the destruction of Chatham Bridge by retreating Confederate forces. Union soldiers constructed the bridge and began crossing the river on December 11, 1862.

Chatham is nationally significant in the area of Health and Medicine for its association with the development of Civil War era field hospitals and the role that women assumed in their operation. By December 15, 1862 the Battle of Fredericksburg ended.

Chatham is nationally significant in the area of architecture as an outstanding example of colonial plantation architecture in the Georgian style, incorporating neoclassical and Palladian elements.

Chatham is nationally, state, and locally significant in the area of archeology for its potential to yield information about the history of the property, particularly during the historic period. Archeological excavations have demonstrated that the historic archeological resources include a wide range of structural and landscape building materials, ceramics, and household objects.

This video introduces the Chatham Manor cultural landscape and invites viewers to visit the park or read more about its past, present, and future. NPS staff from the park and the Olmsted Center for Landscape Preservation describe the features and significance of this unique landscape and actions that have been taken to preserve it.