Rosalie Jones was known as a maverick, strong-willed and opinionated by her friends and allies. Those who disliked her used much stronger words.

Her parents were wealthy: her mother, Mary Elizabeth Jones, came from a wealthy, upper-class family. As well as her inherited wealth, Mary also earned a fortune in real estate development, rumored to own property “in every state in the Union.” Her father was Dr. Oliver Livingston Jones Sr., a physician who also had real estate investments.

In 1909, their home in Cold Spring Harbor, New York burned to the ground. Rumors in the community swirled that Rosalie’s brother, Oliver, started the fire. He suffered from mental illness and was eventually institutionalized. Oliver died early in 1918. In 1911, the family began rebuilding. In 1913, tragedy struck again when Rosalie’s father committed suicide.

Her mother died in October 1918 of Spanish Flu, just nine days before her son Philip died. Rosalie’s surviving brother, Arthur, inherited the family properties. After many years of fighting, Rosalie took possession of one of the family homes and a financial settlement. In return, she agreed to stop accusing her brother of mismanaging the estate.

Rosalie's mother was a member of the New York State Anti-Suffrage Associations. Although raised in an anti-suffrage household, Rosalie was an active suffragist. She first took part in an outdoor suffrage meeting in New York City in 1911. This new and radical way of organizing was started by Maud Malone, another New York City suffragist. From 1912 to 1913, Rosalie served as Nassau County President of the National American Woman Suffrage Association (NAWSA). In the spring of 1912, she traveled around Long Island in a “Votes for Women” wagon pulled by a horse.

Rosalie got her Bachelor of Arts degree from Adelphi College in Brooklyn and then attended Brooklyn Law School. In 1919, she received a law degree from George Washington University in DC. In 1922, she got her Doctor of Civil Law degree from George Washington College of Law, now part of American University in DC. She passed both the New York and Washington, DC bar exams. After law school, she went into business buying and selling real estate. She made a considerable fortune, much of which she lost during the Great Depression.

Like Alice Paul, Rosalie was influenced by Emmeline Pankhurst, a militant suffragette from Britain. To bring attention to the battle for suffrage, Rosalie organized groups of women to march long distances. She called these marches pilgrimages, and the women marching were pilgrims. In December of 1912, over 200 women joined Rosalie for parts of a march of over 140 miles from New York City to Albany, New York.[a] Only a handful of women, including Rosalie, completed the entire route. The march took thirteen cold, wintry days. During the march, the women stopped to hold open air meetings and give out pamphlets in communities along the way. They carried yellow knapsacks and Votes for Women banners. Rosalie’s anti-suffrage mother said the march was “ridiculous.” It was during this pilgrimage, carrying petitions to the governor of New York, that Rosalie earned the nickname “General” Jones. 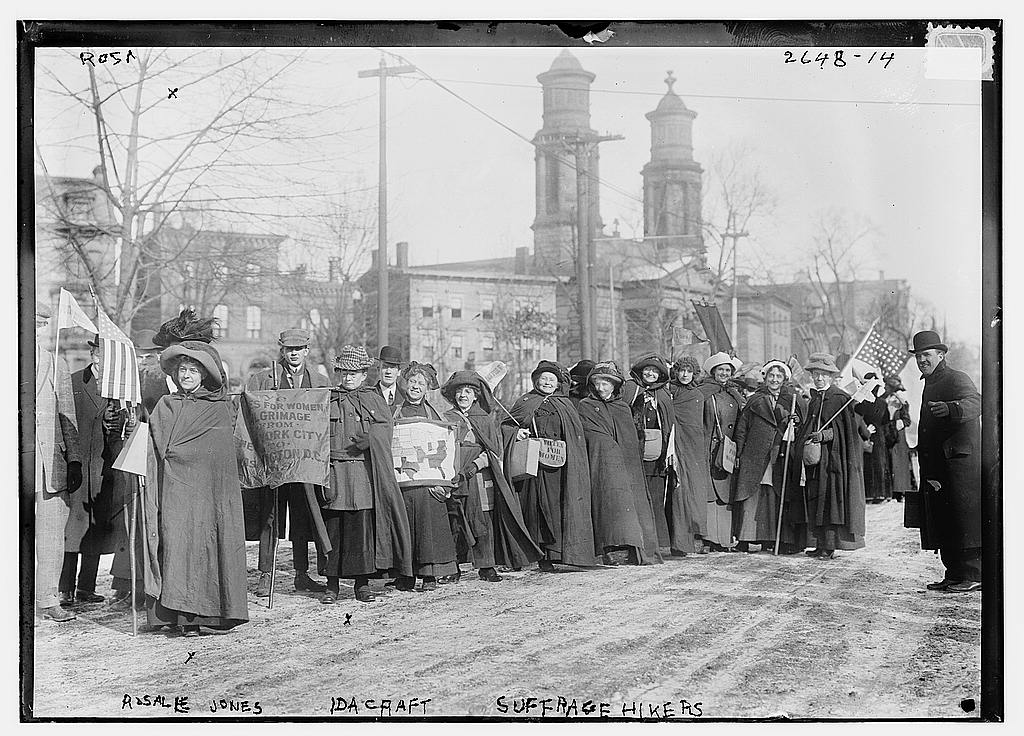 Caption: Rosalie Jones leads the march from New York City to Washington, DC in February 1913. Collections of the Library of Congress (https://www.loc.gov/item/2014692638/)

In February of 1913, General Jones led a group of 225 white women on a march from New York City to Washington, DC. She refused to allow Black suffragists on her pilgrimages – a decision consistent with others she made throughout her life. The group spent the night before entering DC at Laurel, Maryland. In the morning, a cavalry brigade of women met General Jones and escorted the group into DC. On March 3, 1913, General Jones and her “pilgrims” marched in the DC suffrage procession.

After passage of the 19th Amendment in 1920, Rosalie continued working for changes she believed in. For example, she demanded the removal of Robert Moses from his position as President of the Long Island Park Commission. He was, she argued, taking land from people without fair warning. She lived alone for many years at her home on Long Island, and had a reputation for being “difficult.”

In March of 1927, Rosalie married Clarence Dill at St. John’s Episcopal Church in Cold Spring Harbor.[a] She removed the word “obey” from their vows, and refused to “be given away” by anyone. Dill represented Washington State in the United States Senate. That November, Dill ran for a second term, and was reelected. While in DC, Rosalie continued to her involvement in things that were important to her. From 1933 to 1935, she was President of the Congressional Club. Members rebuffed her insistence that the organization engage with social causes. They insisted instead that the clubhouse remain neutral ground, a place “free from the constant drive and appeals from scores of groups for various forms of service.”[b]

Rosalie and Clarence separated before 1934, while Clarence was still in office. He remained in Washington State while she moved back to New York. In 1936, after months of public speculation, Dill filed for divorce from Rosalie. She fought to prevent it. The case received considerable press – both people were well known, and there was name calling and other fodder to entice readers. Among other grievances, Dill claimed that Rosalie called him a “political coward” for not running for a third term, that she was an appalling wife, slovenly, and a terrible housekeeper (even though they had a maid, who testified during the court proceedings). He also claimed she spurned his business advice, telling him he should “keep to politics.” Rosalie claimed that she gave him thousands of dollars in the early years of their marriage. In the divorce, he got their home in Washington State and she got the furniture.

In 1936, Rosalie ran for Congress, but was unsuccessful. She lived much of the rest of her life on Long Island, “composting her garbage, raising goats, defying traditions, and fighting with her neighbors and relatives.”[c] She spent her last years in Brooklyn, where she died on January 12, 1978. Despite the challenges she had with her family over the years, General Rosalie Jones’ ashes were scattered outside of her mother’s tomb at St. Johns Episcopal Church, Cold Spring Harbor, New York.