Experience the Fossil History of Colorado

Beneath a grassy mountain valley in central Colorado lies one of the richest and most diverse fossil deposits in the world. Petrified redwood stumps up to 14 feet wide and thousands of detailed fossils of insects and plants reveal the story of a very different, prehistoric Colorado.

But the world around us is constantly changing

Mountains rise and erode away

Life thrives and changes in a blink.

But our planet, its climate, and its communities of life have been changing for millions of years

Sometimes despite innumerable odds, a shadow of the past survives.

providing clues to ancient life that once existed in this very place.

The geology, fossils, and human stories of Florissant Fossil Beds National Monument are part of a common geologic heritage

The layers of rock beneath this valley contain one of the richest fossil deposits in the world.

They hold clues of unexpected environments and life that existed here during a time called the late Eocene.

dinosaurs were extinct,and it was now the age of mammals.

Around 37 million years ago

incinerating everything in its path

Slowly, life regained a foothold by 34 to 35 million years ago as new, powerful volcanoes loomed over the Florissant valley.

Periodic eruptions blanketed the valley with ash and debris.

Rainfall saturated the loose debris on the slopes of the volcano creating a massive fast moving mudflow called a lahar.

It was miles long and roughly fifteen feet tall when it reached the Florissant valley.

The slurry of mud and volcanic ash surrounded the bases of the towering redwoods.

As the redwoods died, their tops decayed away.

Groundwater, rich in dissolved silica from volcanic ash, gradually seeped into the wood, depositing minerals and petrifying it over time.

After several millennia this lake and the landscape surrounding it nourished an abundance of life.

Volcanic ash and clay settled on the lakebed creating layers of various thickness over time.

Leaves, seeds, insects, fish, and even birds settled to the bottom of the lake where they were buried by new layers of volcanic ash, clay, and diatoms.

Millions of years later, the shale holds fragile fossils, physical touchstones to ancient life, inspiring the mind with connections to this land and its past.

Shadows of ancient human history can also be found here, part of the shared geologic heritage of Florissant.

The Ute, Jicarilla Apache, and other tribes consider the area part of their ancestral lands.

Tribal members still have a strong connection to this area.

Paleontologists have been exploring the area since the 1870s

making Florissant one of the richest fossil sites in the world.

Samuel Scudder conducted an excavation in the Florissant area in 1877, indentifying roughly 600 species.

Attracted by the Homestead Act of 1862, new settlers began estabishing ranches and farms in Florissant.

Charlotte Hill collected hundreds of important fossil specimens that she provided to scientists while homesteading and raising six children.

In gratitude, the fossil rose, Rosa Hilliae, was named after her.

Charlotte Hill collected one of the most remarkable fossil butterflies ever found, Prodryas persephone commonly known as a brush-footed butterfly.

Other brush-footed butterflies live in the Florissant ecosystem today.

Hundreds of new species of fossil plants, insects, spiders, and vertebrates were described as a result of Hill's work with scientists.

The shear number of fossils on the site made an impression on paleontologists like Theo Cockerell, who arrived in 1906.

COCKERELL: There has accumulated and almost embarassing amount of material, and many remarkable things have been discovered.

NARRATOR: Florissant fossils were sent to museums around the world, and the site became famous.

Tourists arrived eager to see the giant petrified stumps and to collect fossils as souveniers.

Dynamite was used to better expose the petrified stumps.

An attempt was even made to saw the big stump into pieces to ship to the 1893 World's Fair in Chicago.

By the 1920s, tourists were beckoned by commercial sites and a dude ranch with a fireplace made from petrified wood.

SINGER: Now at one time, there were big petrified stumps and logs lying on the ground all around the countryside

but they have mostly been sold or stolen away.

He saw the Florissant fossil area as key to understanding the story of life's past.

But years of uncontrolled collecting, had led to the increasing disappearance of the fossils.

Scientific and local communities began to call for conservation of the fossil beds.

In 1969, land containing fossils at Florissant was targeted for housing development.

The fossils and their clues to ancient life could be lost forever.

Scientists like Estella Leopold and other citizens formed a group called the Defenders of Florissant.

Paleobotanists MacGinitie joined Leopold and others to testify before Congress

and then brought senators to see Florissant first hand

MacGinitie: The land is not of particularly great value for housing or agriculture, but as a page of Earth's history it is priceless.

LEOPOLD: How can man evaluate his planetary environment and visulaize his historic place in it if he does not keep and cherish a few touchstones from the past?

NARRATOR: in a landmark environmental case, a legal team went to court to stop the imminent destruction of Florissant's fossils and their record of ancient life.

YANNACONE: To sacrifice this 34 million year old record for 30 year mortgages and basements is like wrapping fish with the Dead Sea Scrolls.

Narrator: On August 20, national monument status was granted to Florissant Fossil Beds, safeguarding it's geologic heritage for the world.

Some of the largest petrified stumps on the planet that onced faced bulldozing and dynmaite are now protected and monitored for any damage from the environment or weather.

Florissant has the only known petrified trio, interconnected trunks growing as one plant.

so that they can reveal even more knowledge of the past.

Countless fossils are only visible under a microscope.

By compaing Florissant's fossils to modern plants scientists can determine temperature and precipitation from the ecosystems of the ancient past.

Right after the end of the warm Eocene, there was a huge drop in global temperature.

The Florissant climate changed abruptly to a cooler temperature climate.

Plants native to the warmer climate either adapted, became extinct, or dispersed to warmer regions.

Fossils reveal to scientists how plants and animals responded to climate change in the past.

Modern relatives of the golden rain tree are native only to China, Taiwan, and Fiji

yet they once existed at Florissant milions of years ago.

The two most common plant fossils are extinct members of the elm and beech families.

Fossils of more than 30 species of vertebrates have been found.

Fish skeletons and mammal teeth are the most abundant.

Florissant is especially noted for its delicate insect and spider fossils.

Florissant has more species of these ,perhaps than any other fossil site in the world.

This extremely rare tsetse fly is evidence of a different climate that once existed at Florissant.

The tse tse fly now live only in tropical Africa

For ancient life, temperature changes occurred over tens of thousands of years

Some life became extinct some adapted to the changing climate and environment.

And some dispersed to other places where the climate was more favorable.

Climate change is happening today at a much more rapid rate

Florissant fossils allow us to look to the past to better understand the present.

and to guide our stewardship of life in the future.
Visit our keyboard shortcuts docs for details

The geology, fossils, and human stories of Florissant Fossil Beds National Monument are part of a common geologic heritage. The layers of rock beneath this valley contain one of the richest fossil deposits in the world. They hold clues of unexpected environments and life that existed here during a time called the late Eocene. 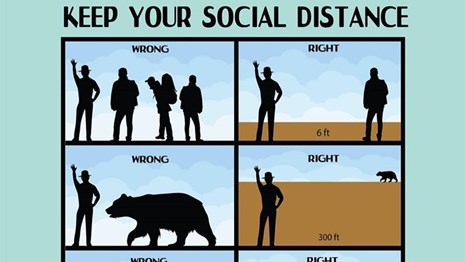 Please practice social distancing while hiking at Florissant Fossil Beds and also in the parking lot and pit toilet areas. 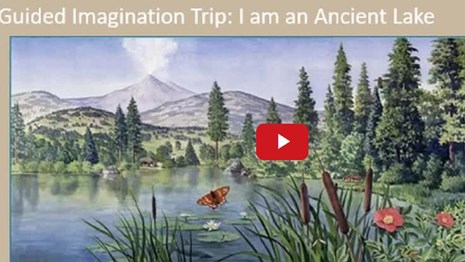 Take part in a variety of engaging activities to learn about the park from your home. 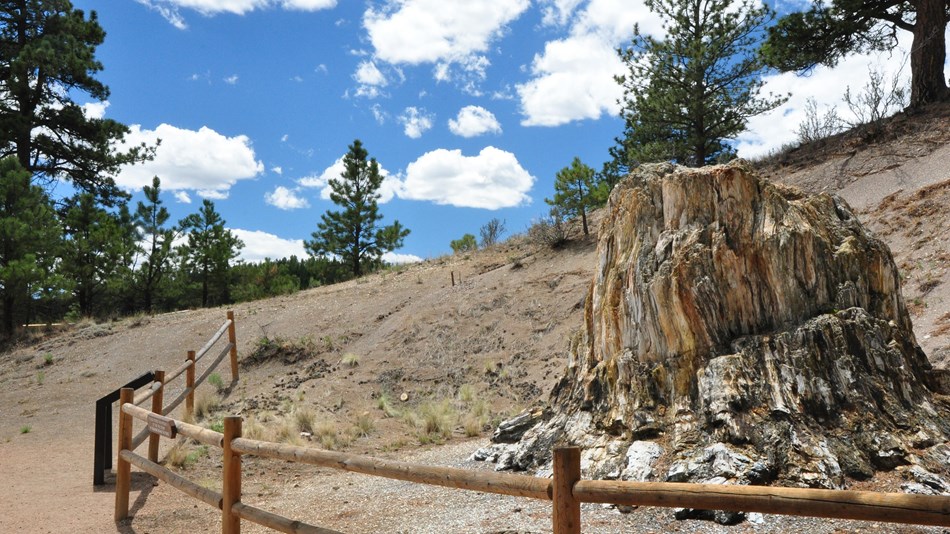 What do we do when we get there? 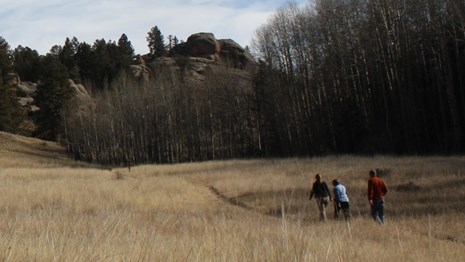 Hike on one of the park's 14 miles of trails. 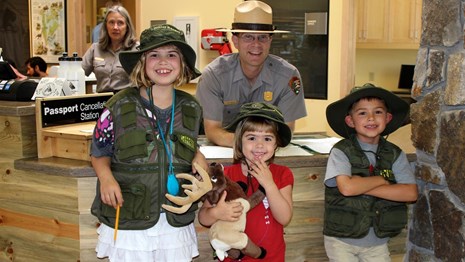 Be a Junior Ranger!