A utopian society, as defined by Robert V. Hine in California's Utopian Colonies, includes “a group of people who are attempting to establish a new social pattern based upon a vision of the ideal society and who have withdrawn themselves from the community at large to embody that vision in experimental form." They are composed of either religious or secular members. The former stressed (in the western tradition) a community life inspired by religion, while the latter expressed the idealism of utilitarianism as a means to create happiness, with a belief in the cooperative way of life.

Explored within this essay is the origin and development of the Utopian idea within in the United States. It includes examples of nineteenth century utopian societies and, occasionally, what led to their demise.

Origins of the Utopian Idea:

Western ideas of utopias are linked to the desire to recreate paradises lost to history, such as Eden in the Old Testament. Utopia translates from Greek words ou and topos to mean “not a place.”

In Republic, Plato described the ideal Greek city-state as requiring communal living among the ruling class, perhaps based on the model of Sparta. Sir Thomas More wrote Utopia in 1516, describing a perfect political and social system on an imaginary island. This book popularized the modern definition of "Utopia" as being any place or situation of ideal perfection.

The 19th-century utopian sects can trace their roots back to the Protestant Reformation. Based on the organization of early Christian communities, communal living developed and grew largely within monastic communities. During the Middle Ages this communal organization spread to outside of monastic contexts and into several lay religious groups.

The Protestant Reformation changed western European societal attitudes about the nature of religion and work. Martin Luther stressed that all work was of equal spiritual dignity. John Calvin believed that a person could not know for certain if they were among God's Elect or the damned. Outwardly a person's life and deeds, including hard work, could include them as one of the Elect. Ideals about work, such as these, were stressed in the various American religious utopian societies. The Shakers, for example, believed in productive labor as a religious calling. Amana Inspirationists saw labor as productive and good, part of God's plan of contributing to the community.

In the wars and general disorder following the Reformation, some new Protestant sects practiced communal ownership of property. To avoid persecution several of these groups immigrated to America, where the idea of communal living developed and expanded.

The early 19th century brought a great expansion of communitarian experiments within the U.S. Land was plentiful and inexpensive and unhampered by government regulations. Europe, in contrast, was emerging from a long history of religious wars. America became a location where people could start over, creating a "New Eden" across the Atlantic.

The First Amendment’s guarantee of freedom of religion attracted European groups who were persecuted in their own countries. Upon arrival in America, many hoped to form Utopian societies - self-contained, agrarian, and communal in nature. Several of these societies are explored below.

Shaker societies were characterized by communal living, productive labor, celibacy, pacifism, and gender equality. They were also associated with feminist and abolitionist reform movements in the 19th century. A significant portion of Shakerism was founded in England by (Mother) Ann Lee in 1758, and was imported to America by Lee and several followers in 1774. By the Civil War there were 6,000 shakers who maintained their economic autonomy while also making items for outside commercial distribution. Their agrarian work was eventually redirected to handcrafts, particularly furniture.

Examples of Shaker communities can be found at:

The latter is the sole surviving Shaker community.

The Brook Farm Institute of Agriculture and Education was established at West Roxbury, Massachusetts, on some 200 acres of land from 1841 to 1847. It was founded by Transcendentalists who wanted to live a life based on the principles of “plain living.” It became known for those associated with it, which included George Ripley, Charles A. Dana, Nathaniel Hawthorne, Ralph Waldo Emerson, Margaret Fuller, William Henry Channing, John S. Dwight, and Sophia Dana Ripley. It began with about 15 members and never had more than 120 people at one time.

Farm attracted not only intellectuals, but also carpenters, farmers, shoemakers and printers. The community provided housing, fuel, wages, clothing and food for all members. There was an infant school, a primary school and college preparatory course. A fire in 1846, combined with financial issues, brought about the end of the Brook Farm community in 1847. The Brook Farm site is now recognized as a National Historic Landmark, and Nathaniel Hawthorne used it as the basis for The Blithedale Romance.

The Harmony Society, also called the Rappites, were similar to the Shakers in certain beliefs. Named after their founder, Johann Georg Rapp, the Rappites immigrated from Württemburg, Germany to the United States in 1803. They established a colony in Butler County, Pennsylvania, called Harmony, and believed that the Bible was the sole authority.

Under Frederick Rapp, George Rapp's adopted son, the economy of Harmony grew from one of subsistence agriculture to gradual diversified manufacturing. By 1814, there were 700 members, a town of about 130 houses, and several factories. Eventually the Harmony Society sold all of their holdings to a Mennonite group for $100,000 and moved to a new location in Indiana. They again they built a prosperous community, New Harmony, only to sell it too in 1825. The Harmonists returned to Pennsylvania and built their final home at Economy on the Ohio River. They reached their peak in 1866, but the practice of celibacy and several schisms thinned the Society's ranks, and the community dissolved in 1905.

The Oneida Community was founded and led by John Humphreys Noyes of Brattleboro, Vermont. He studied theology at Andover Theological Seminary, and later Yale. He became involved in the abolitionist movement, and in 1833 he founded the New Haven Anti-Slavery Society and the New Haven Free Church. His followers became known as Perfectionists, and they practiced "complex marriage,” meaning that they considered themselves married to the group, not a single partner.

Noyes moved his community to the town of Oneida, in New York. The community practiced broom manufacturing, shoe manufacturing, flour processing, lumber milling and trap manufacturing. The Perfectionists in Oneida held communal property, meals and arrangements for the rearing and education of children. The Oneida Community Mansion House began housing the community in the early 1850s, and in 1874 there were 270 members. Misunderstanding of the community inspired an 1879 meeting of ministers in Syracuse, where they condemned the settlement. Unrest hit the Perfectionists, and Noyes fled to Canada on June 29, 1879. Their communal experiment ended in January of 1881 when the community was reconstituted as a joint stock corporation.

The Demise of the 19th-Century Utopian Colonies:

Several religious and social communal groups developed in the nineteenth century. Yet of all these utopian groups only the Amana Inspirationists developed and built a network of seven villages set in an agricultural region. As other communal groups in the United State, the Inspirationists of Amana founded their communities with an agricultural basis as. They modified their system into two distinct organizations, one secular and one spiritual. Both men and women labored, although in Amana women's work did not include trades and the ministry as it did in the Shaker communities.

While further experiments in communal living continued into the 20th century, the great wave of the 19th-century had begun to subside. Each community faced different circumstances that led to their individual demise. Overall, an increasingly industrialized world coupled with hostility of surrounding areas contributed most to their downfall. 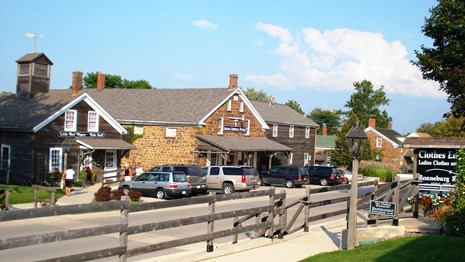 The Community of True Inspiration made east-central Iowa their home in 1855 and practiced their communal lifestyle until 1932. 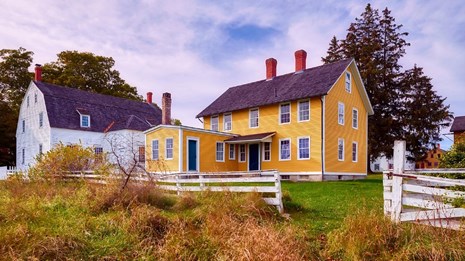 Mother Ann Lee brought the Shaker way of life to the US in 1774. Believers eventually founded 19 communities within the country.