Indiana women were involved in the fight for women's rights from the early days of the movement. In October 1851, Amanda Way organized a convention in Dublin, Indiana with the purpose of advocating for women's social, economic, and political rights. After the convention, women formed the Indiana Woman's Rights Association, one of the nation's first statewide organizations dedicated to the cause of women. Indiana suffragists presented the first petition advocating for women's right to vote to the state legislature in 1859.

Through the following decades, women continued to lobby the legislature to amend the state constitution and remove the language that restricted voting rights to men. Susan B. Anthony visited Indiana several time to agitate for the cause of woman suffrage. During one visit in 1897, she addressed the General Assembly and declared, "I want the politicians of Indiana to see that there are women as well as men in this State, and they will never see it until they give them the right to vote. Make the brain under the bonnet count for as much as the brain under the hat."

To amend the state constituion was a years-long process that required passage during two consecutive sessions of the legislature. Although Indiana suffragists were successful in passing an amendment in 1881, at the next legislative session the measure had somehow disappeared from the official record.

By the 20th century, several organizations were working throughout the state for woman suffrage, including the Woman's Franchise League of Indiana and the Equal Suffrage Society. While there is some evidence that early suffrage activism in the state was racially integrated, Black women were likely excluded from organizations led by white women in the 1900s as racial segregation became increasily prevalent in Indiana and in the nation as a whole. African American women in Indiana fought for the right to vote and formed their own clubs and suffrage associations. At least one suffrage club met in the home of Madam C. J. Walker, entrepreneur and the country's first Black woman millionaire.

Many Indiana suffragists began to turn their attention towards the passage of a federal amendment to win the vote. The National Woman's Party, founded by Alice Paul and Lucy Burns , opened an chapter in Indiana with Eleanor Barker as its chair. Barker left the National Woman's Party in 1917, perhaps out of concern for its increasingly confrontational tactics which included picketing the White House. That same year, Indiana suffragists won a small victory when the Indiana General Assembly passed a partial woman's suffrage law. Indiana suffragists mobilized women throughout the state during the summer of 1917. Close to 40,000 Indiana women registered to vote; in at least one county, women were 80% of all registered voters. But the victory was short-lived. The Indiana Supreme Court struck down the partial suffrage law in October 1917.

Indiana suffragists then increased their efforts towards passage of the Susan B. Anthony Amendment. In 1918, they collected over 700,000 signatures on a petition sent to Congress in favor of the amendment.

On January 16, 1920, Indiana voted to ratify the Nineteenth Amendment. By August of 1920, 36 states (including Indiana) ratified the amendment, ensuring that the right to vote could not be denied based on sex.

To bring greater attention to their cause, the women of Indiana commissioned a statue of State Senator Robert Dale Owen in 1911. Owen was a supporter of universal suffrage and women’s rights. The statue, made by female artist Frances Murphy Goodwin, was presented to the Indiana legislature at the State Capitol Building. Today, the Capitol Building is listed on the National Register of Historic Places and is open for tours by appointment. 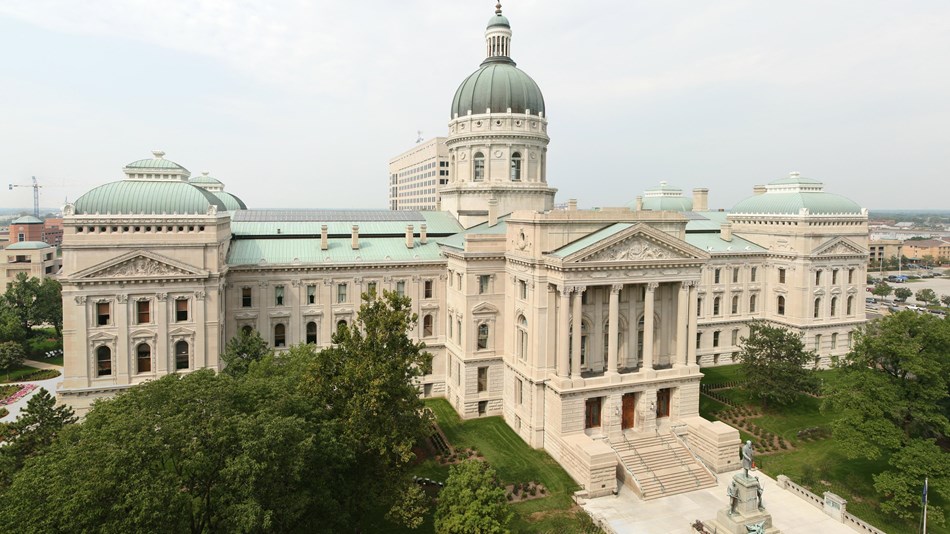 The State Capitol Building is an important place in the story of ratification. It listed on the National Register of Historic Places.