Poor air quality is a common problem in many urban areas. It can lead to decreased human health, damage to landscape materials and ecosystem processes, and spoiled scenic views due to reduced visibility. The National Park Service monitors and assesses air quality in park units. The trees in NPS’s urban forests contribute to improved air quality.

Trees can improve air quality through a number of means, including by (1) reducing air temperature thus altering pollution concentrations, (2) reducing energy consumption in buildings, which consequently reduces air pollutant emissions from the power sources, and most notably, (3) directly removing pollutants from the air. Urban forests can remove multiple tons of ozone, gaseous air pollution, and particulate matter each year either through direct uptake of gasses or temporarily intercepting airborne particles. The combined positive impacts of an urban forest lead to a net reduction in urban ozone formation, according to multiple studies from the USDA Forest Service.

The UERLA i-Tree analysis calculated the amount of pollution removed by urban forest tree-canopy in 11 National Capital Area parks. In total, these parks remove over 1.1 million metric tonnes of air pollution every year. 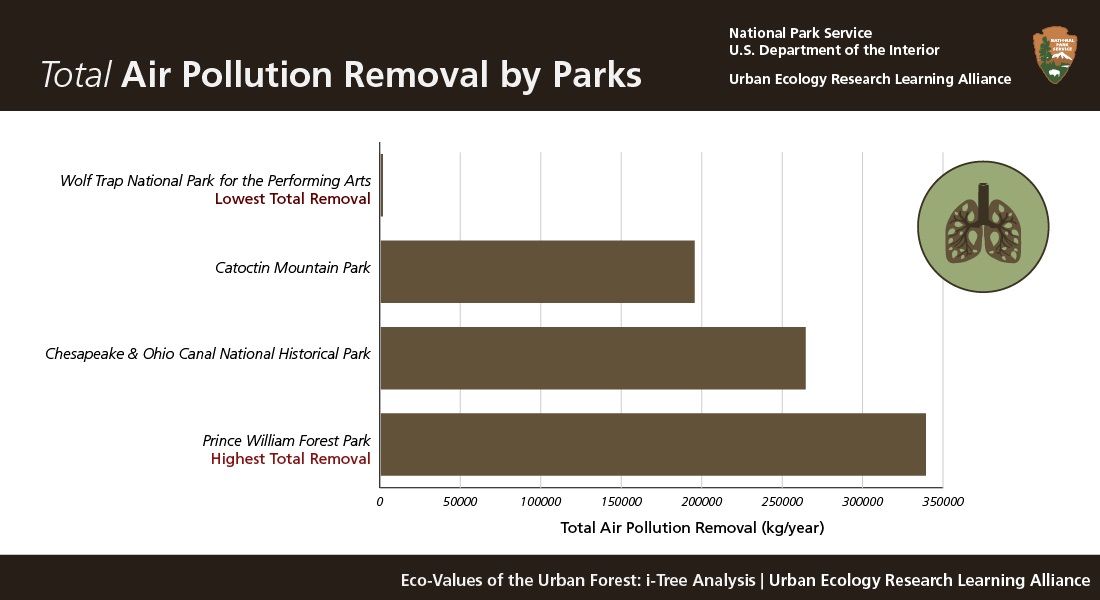 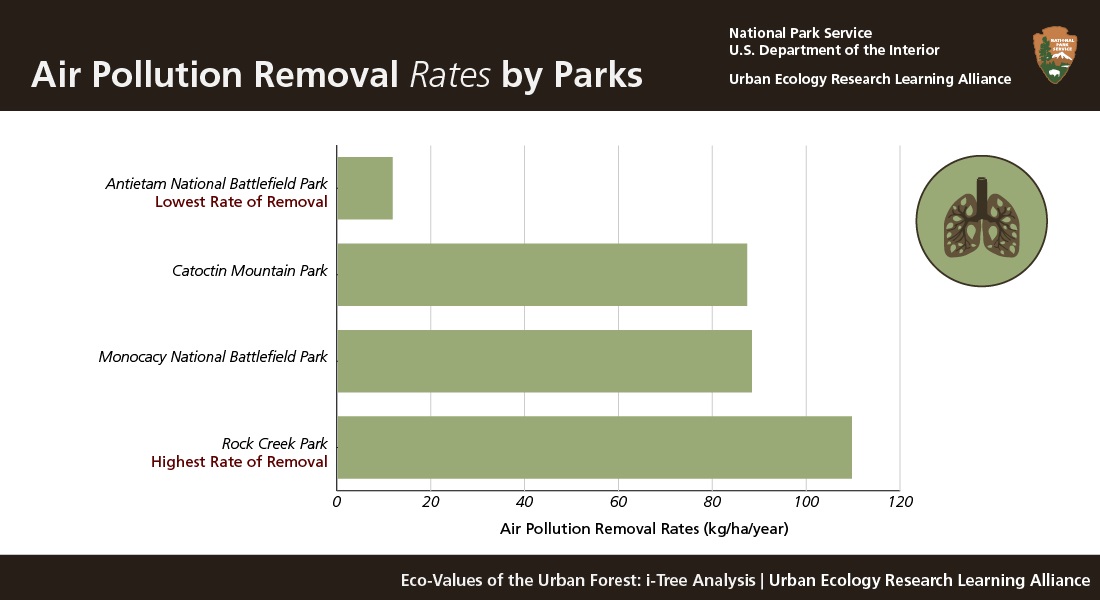 Pollution removal was calculated for ozone, sulfur dioxide (SO2), nitrogen dioxide (NO2), carbon monoxide (CO), and fine particulate matter less than 2.5 microns (PM2.5). These are classified as “criteria air pollutants” by the Environmental Protection Agency, meaning they are used as key indicators of air quality. Of the tonnes of the pollutants removed by NCA urban forests, a majority was ozone, according to the i-Tree analysis.

The rate of annual pollution removal by hectare varies by the different parks, partly due to their locations. Air pollution can be concentrated in urban areas because the burning of fossil fuels by automobiles in a concentrated area is a main source, and some NCA parks are considerably more urban than others.

How do trees remove air pollution?

Gaseous air pollution: Trees absorb gaseous molecules in the air. Tiny pores on tree leaf surfaces called stomata take in air that includes toxic pollutants. Once inside the leaf, the gases diffuse into intercellular spaces and may react with inner-leaf surfaces. This means pollutants like SO2, NO2, CO, and ozone are permanently converted when inside the leaf. However, studies have found that ground-level ozone significantly reduces tree growth, injures the foliage, and predisposes trees to insect and disease attack.

The Value of Removing Air Pollution

Air pollutants can interfere with enjoyment of outdoor activities. A few of their impacts listed by the EPA include:

Previous: Overview of the Urban Forests