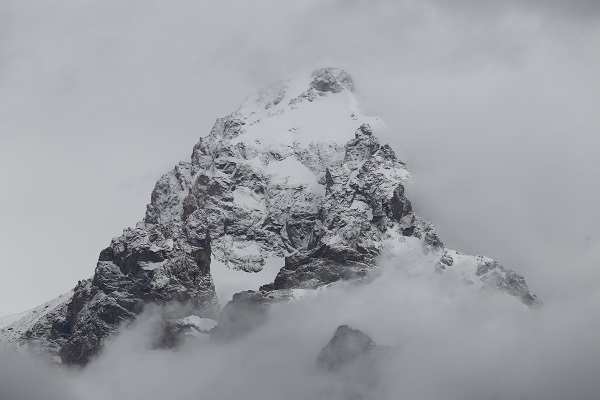 How can we use clouds to predict the weather while in the field?

2. Students will be able to identify and describe three types of clouds with specific reference to field identification.

3. Students will be able to use clouds as evidence in a weather prediction statement.

Even though we might not think about it, we are all affected by weather every day. This is particularly evident in mountainous regions, where the weather can change suddenly and drastically. Have you ever planned a hike only to have the rain put a damper on your trip or traveled to see mountains only to experience clouds covering the peaks? Weather is always changing and developing, but if you know where to look, you can accurately predict the weather in the field. After this lesson you should have a better grasp on what the weather might do. Although weather prediction is not an exact science, it can give some generalities to help us predict what might happen next.

Mountain Weather is a force that climbers and outdoor enthusiasts need to understand and predict in order to plan safely and make good decisions in the backcountry. Use this lesson to help students understand weather patterns and processes and learn field prediction.

Before we begin discussing the details of weather, we need to discuss why there is weather. Have a student volunteer help you demonstrate why weather exists by creating your own planet with its own weather. Use the globe as your planet. Create air on the planet by blowing on the globe or fanning it with a piece of paper. Heat from sunlight causes air to move around the earth, creating wind. Shine the flashlight on the globe to mimic the sun and create wind. Spin the globe to replicate the earth's rotation. Explain the Coriolis Effect and global atmospheric circulation (refer to the background section). Add moisture to the atmosphere by spraying the globe with the water sprayer. Water vapor makes up a tiny portion of the earth's atmosphere, but it causes most of our weather.

Teach a brief Weather 101 lesson so students have a base to build upon (refer to background section). Next discuss how clouds form. Clouds form when air cools to its dew point, or the temperature at which the air can no longer hold all of its water vapor. At the dew point, water vapor condenses into water droplets and clouds form. There are two mechanisms which can cause air to rise and cool to its dew point: convection and orographic lift. Radiation from the sun heats the earth and causes air to rise. This process is known as convection. Orographic lift occurs when an air mass is forced from a low elevation to a higher elevation as it moves over rising terrain (i.e. mountains). Orographic lifting causes rapid cloud formation and summer storms in Grand Teton National Park.

Clouds are the main environmental factor that we can use to help us predict the weather. Many of us already know that dark clouds likely mean that there is a chance of rain, but today we are going to take it a step further and learn how we can predict when those dark clouds will form. We will begin by learning the basic cloud types. Hand out the Cloud Card images to different students or groups of students and review cloud terminology. Read the name and description of each cloud type to the students and have them guess if they are holding the picture of the cloud you are describing. After reviewing the cloud types have students arrange the cards, sorting their clouds into high altitude, middle altitude, or low altitude categories.

Changes in temperature, wind, precipitation and severe weather are often created by fronts, the meeting of two differing air masses. Warm fronts occur when warm air moves into a cooler area. Warm air slowly rises over the cooler air mass and replaces it. Warm fronts are typically preceded by steady precipitation and produce stratus clouds, as air is being forced to rise over a large area. After the warm front has passed, fair and mild weather can be expected. Cold fronts occur when cold air moves into a warmer area. As cold air moves in, it forces the warmer air to rise rapidly. This leads to the formation of towering cumulonimbus clouds and severe weather. Skies clear quickly after the cold front has passed and temperatures are cooler.

Now that students have a basic idea of cloud types and weather, review how they can use clouds to interpret the weather:

Clouds are not the only way that we can predict the weather in the field as there are many other indicators that nature gives us which can help indicate what the weather might do. There are a lot of folklore sayings regarding weather prediction. Let's take a look at some of these and see what they mean.

Print the Weather Lore Sayings and cut them in strips. Have one student read the saying and the others guess what it means before reading the explanation.

Have students arrange the cloud cards, sorting their clouds into high altitude, middle altitude, or low altitude clouds or predictors of fair vs. inclement weather.

Read Weather Lore Sayings and have students predict the weather.

Students gather in small groups of 4-5 people to research and present:

Sign up for our Ask a Ranger distance learning program