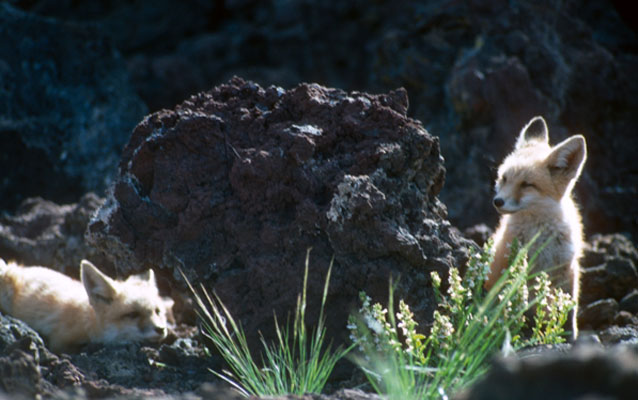 Grade Level:
Upper Elementary: Third Grade through Fifth Grade
Subject:
Science
Lesson Duration:
60 Minutes
State Standards:
NATIONAL/STATE STANDARDS:
CCRA.SL.1, CCRA.SL.6
NGSS.SEP.2, NGSS.SEP.4
Thinking Skills:
Remembering: Recalling or recognizing information ideas, and principles. Understanding: Understand the main idea of material heard, viewed, or read. Interpret or summarize the ideas in own words. Applying: Apply an abstract idea in a concrete situation to solve a problem or relate it to a prior experience. Analyzing: Break down a concept or idea into parts and show the relationships among the parts.

What are living and non-living parts of an ecosystem?

Students learn about biotic (living) and abiotic (non-living) parts of ecosystems through one worksheet and two activities. (CLASSROOM ACTIVITY)

An ecosystem is the total of living parts (plants and animals) and non-living parts (sunlight, air, water, soil) that support life in a unit of nature. We can refer to the Earth as one ecosystem or divide it into smaller units with similar characteristics (e.g., temperate forest, coral reef, and desert ecosystems). An aquarium or a cave could even be described in ecosystem terms.

Ecosystems are powered by the sun. Energy, in the form of sunlight, makes life as we know it possible. Air (specifically the oxygen, carbon dioxide, and nitrogen it contains), water, and the nutrients and minerals in soil make up the rest of the nonliving parts of an ecosystem. (Rock and dead organic matter will become soil in time.)

The living parts of an ecosystem can be divided into three categories:

Energy flows from the sun in the form of sunlight. While sunlight feels good on our skin, it doesn't feed our bellies. Plants, however, can take that sunlight and turn it into food! When we eat, we are in a way eating part sunshine. When we and other animals produce waste and eventually die, other, mostly microscopic, organisms may use the energy in our waste and dead bodies. This matter is reduced by decomposers and returned to the soil, where it may be used again by plants.

Energy is lost as it flows through an ecosystem. For example, not all the sun-light energy a plant receives is converted to chemical energy (i.e., carbohydrates). Some of it is wasted. Likewise, when mammals digest food they convert some of it to heat, which is irretrievably lost to the universe.

Matter, on the other hand, is conserved and recycled. The atoms that make up the molecules of living things have always been on Earth and will always remain here-as long as we don't blast them into space! The atoms and molecules in your body may have been in a Tyrannosaurus rex 65 million years ago (and might be in a cockroach scientist 65 million years from now)!

See "Additional Resources" below for more information on the ecology of Craters of the Moon.

From the Teacher's Guide to Craters of the Moon.

Display illustrations of non-living, living, and the whole ecosystem.
Have students list the parts of each:

Figure 1. Illustration of Crater's ecosystem without plants and animals Figure 2. Illustration of Crater's ecosystem with only plants and animals. Figure 3. Craters of the Moon Ecosystem.

Once they get the idea that everything around them can be divided as living or nonliving, describe living things in more detail. Explain the relationship between producers, consumers, and decomposers (see Background section). Pass out the complete ecosystem illustration (Figure 3) and have them label its biotic and abiotic parts as follows:

Then draw arrows showing the path of energy through the ecosystem.

As a fun way to reinforce their new-found ecosystem knowledge, go outside and do the following activity.

Start with the source of all our energy-the sun. Choose three or four kids and ask what sound the sun would make if it could make sound. Encourage them to come up with a sound of their own.

Living things are mostly made of water. Ask three or four students to stand around the suns in a circle after they have come up with a good sound for water.

Without air and the oxygen it contains, we'd be finished. Get three or four students to join the circle once they have decided what sound they'll make.

Soil, and the nutrients and minerals it contains, is necessary for plants. What sound will the three or four soils make when added to the ecosystem?

Of living things, plants (producers) are most abundant. Once you've got about four people to be producers put them in the circle. A good thing for producers to say is, grow, grow, grow!" since that is what they do under the sun.

Consumers eat producers so they could say "munch, munch, munch!" You need two or three students for this.

Finally, all those producers and consumers would simply pile up and sit there when they die if not for the decomposers that cause them to "rot, rot, rot!" Finish off the circle with the decomposers.

See if all the participants know their "lines" by going through the ecosystem one by one. Don't let anyone get away with mumbling. If they're loud and obnoxious in the classroom when they shouldn't be, don't let them be quiet and shy now. Once they're ready with their parts, build the ecosystem by starting with the Sun and having the rest of the parts chime in one by one. You could have them revolve around the Sun to add a little motion to your ecosystem.

Make four lines on the ground as shown below. The kids will face away from each other on lines 2 and 3. They decide unanimously within each team which of the three to be. On your count of three they face inward showing their symbols. When you drop your arm, the dominant group rushes to tag the other team who runs to get to their free zone behind line 1 or 4. For example, if line 2 were consumers and line 3 were producers, when they faced each other they would see that the consumers (line 2) are going to chase the producers (line 3). When you drop your hand, they run toward line 4. If the producers get behind line 4 without being tagged, they're free. Hold your hand up a long time if necessary to give the kids time to figure out which way they should run. Ask them questions while your arm is raised. Have them give you examples of producers, consumers, and decomposers. There will be confusion at first so do the game enough times so most the kids understand the relationships between producer, consumer, and decomposer.

Ecology of Craters of the Moon