Barrett Farm and the Start of the American Revolution 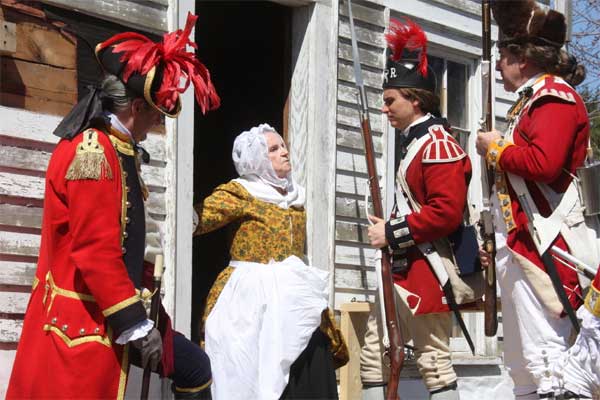 1.) How is history created?
2.) Are all historical sources reliable?
3.) How did the American colonists contribute to the coming of the Revolution?

At the end of this lesson students will be able to...
1.) Explain and evaluate the role of Colonel James Barrett on April 19, 1775
2.) Analyze primary sources and cite specific examples from them to create a narrative about a historical event.
3.) Evaluate the credibility of secondary sources about the Barrett family on April 19, 1775.

April19, 1775 is undoubtedly one of the most important days in American history, but how do we know what happened that day almost two hundred and forty years ago? Historians use primary sources as a clue to determine what happened in the past. Many of the events leading up to and on April 19, 1775 in Concord relate to town resident Colonel James Barrett. Using primary sources your students will become historians and answer the question, “What was Colonel James Barrett’s role on April 19, 1775?”

Background information on Colonel James Barrett: On April 19, 1775, Colonel James Barrett was 64 years old. As a younger man he fought in the French and Indian War as a militia captain. He was a selectmen in the town of Concord and delegate to the Massachusetts General Court before the relationship between Great Britain and the American colonists turned sour. James Barrett even supplied the British troops stationed in Boston with produce from his farmbetween 1768-1774. After the Intolerable Acts essentially ended self-government in Massachusetts, James Barrett served as a delegate to the illegal Provincial Congress. The Provincial Congress began the work of military preparations and made James Barrett a colonel of a militia regiment in October 1774. He was placed in charge of the military stores that were collected in the town of Concord, 20 miles from Boston.

A list from the Provincial Congress of military supplies under the supervision of Colonel James Barrett.

This is the draft of the orders from General Thomas Gage to Lieutenant Colonel Francis Smith regarding the mission to Concord.

This is the account of a young British officer regarding the defense of North Bridge and the march to Colonel Barrett's farm.

In 1825, the town of Lexington took new depositions from ten surviving participants of April 19, 1775. These depositions were included in The Battle of Lexington by Elias Phinney. The main purpose of the work was to disprove Concord's claim that the first active resistance to the British soldiers was at the North Bridge and show what an important role the Lexington militia had in the events of the day. The town of Concord countered Phinney's work with A History of the Fight at Concord by Ezra Ripley. Ripley included four new depositions from surviving Concord participants in the battle and used them to prove the first true resistance of the day came in Concord.

Excerpt is based on an interview done by Shattuck with Mary Prescott Barrett in 1831. She married Col. Barrett's son Peter and was not present at the farm on April 19, 1775

Have the students write or bullet point a short narrative answering the main question, “What was Colonel Barrett’s role on April 19, 1775?” when they are done analyzing the sources. Remind students that their narrative should include specific example from the sources. When students are complete, have them share their narratives with the class and consider the following questions.
Tell students that these are the same challenges that historians must face when analyzing sources and creating the histories that we read.

Explain to students that sometimes what we believe is historical fact is not based on primary sources from the time of the event. Often times, stories emerge decades after the event that are passed through families. Stories like these emerged in the 19th century about Colonel James Barrett and his farm; should we believe them?

Ask students to read the following secondary source accounts related to the events of April 19, 1775 and Colonel James Barrett and consider the following questions for each.
1. Do you believe this is a credible account? Why or why not?
2. What information from the previous activity did you use to make this assessment?

After reading the sources and answering the above questions, discuss the sources on the whole as a group and consider the following questions.