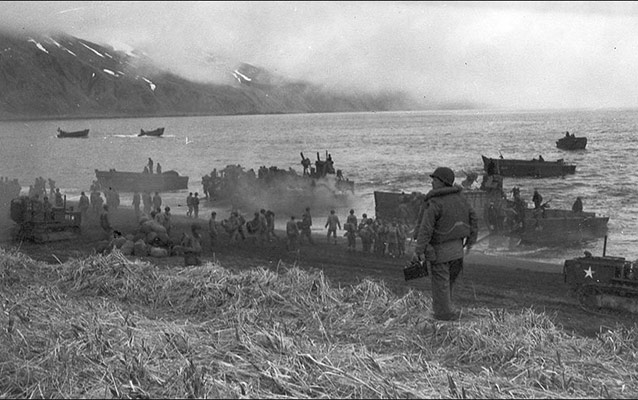 What was the Battle of Attu about?

1) To explain the significance of the Japanese occupation and American recapture of Attu.

2) To describe the complexity of even a relatively small-scale military campaign.

3) To discuss both the valor of the American soldiers, who fought under weather conditions considered among the worst in the world, and the loyalty of the Japanese troops to their emperor and their cause.

4) To analyze different sources of information relating to a particular historic site.

In early June 1942, America had cause for jubilation and despair. The war news told of coordinated attacks by the Japanese on Midway and the Aleutian islands. At the Battle of Midway, American planes sunk four Japanese aircraft carriers and destroyed or hundreds of planes. But in the Aleutians, the Japanese bombing had been successful, and they occupied the islands of Attu, Agattu, and Kiska.

This alarmed the American people because it was feared that the enemy would use Attu and other small Aleutian islands as a staging area for attacks on the North American mainland. There was also concern that the occupation might disrupt United States-Siberian communications necessary for the Lend-Lease program, a program allowing the president to sell, transfer, exchange, lend equipment to any country to help it defend itself against the Axis powers. This included assistance to the U.S.S.R. The Americans had to regain the Aleutians at all costs. Following a difficult campaign, made more difficult by the weather, the Americans did oust the Japanese from Attu and gain control of the rest of the Aleutians. The islands then were used as a staging point for attacks on Japanese territory.

By looking at Attu: North American Battleground of World War II, students better understand why an isolated battle on a remote island in Alaska alarmed the nation. Those interested in learning more will find that the Internet offers a variety of interesting materials.

Please reference the Procedure section for step-by-step instructions and links to lesson materials.

Have each student read a short account of the Battle of the Aleutians. Reading comprehension questions are included at the end for assessment.

Share Drawing 1: The Capture of Attu with your class and have them answer the following questions:

1. Using the reading from step 1, locate the sites of the battle on Drawing 1.

2. What natural land features assisted the Japanese in holding back American troops for a short time?

3. Locate Siddens Valley. What made the Japanese banzai attack through here so precarious?

Look through these three photos of the Attu battlefield.

1. How did the Japanese use the natural environment of Attu to defend their occupation of the island?

2. What advantages did the Japanese have over the American troops?

3. Note the date that Photo 2 was taken. What does this photo demonstrate about the effect troops had on the environment?

Look through two more photos of American forces during the invasion of Attu.

1. What observations can you make about the terrain on Attu?

2. How did Attu's terrain hinder the American troops' effort to regain the island?

3. How safe do you think landing troops at Massacre Bay was? Why? What obstacles did they face?

4. Why was it so hard to move supplies on the island?

Look through one last photo of the Attu battlefield, where numerous Japanese soldiers committed suicide after their final banzai attack failed. If you feel this photo is too graphic, it can be skipped, but questions two and three, below, should still be posed to each student.

1. Refer to the reading from Step 1 and describe what happened in this photo. Why would the Japanese soldiers do this?

2. Examine all six of the photos presented in Visual Evidence. How can photos help historians analyze a particular event? What are the strengths of using photos to interpret history? What are the weaknesses?

3. All of the photos except the second were taken by military personnel as an official record of the island campaign. Can photos, by themselves, fairly represent a historical event? Why or why not?

The following optional activities can help demonstrate to students the chronology of World War II and the context of Americans at war.

Activity 1: Setting the Context Have the students first check their own history textbooks to see if Attu or the Aleutian Islands are mentioned. Then have them choose one of the following assignments: Research the Battle of Attu more fully and make a report to the class. Examine the entire war in the Pacific to better understand the particular role the Battle of Attu played in the full campaign. Call veterans' groups in the community and try to arrange for members who fought in World War II to come to class and speak about their personal experiences.

Activity 2: The Local Impact of World War II Have students investigate their own region to see how it was affected by World War II. If there were active military bases, they might find out where the armed forces who trained there were sent. They might also check to see if local factories were engaged in war work. If these bases or factories no longer exist, the students could find out what is now located on the sites. Local papers published during the 1940s are good sources both for information and photographs. These usually can be found in the archives of public libraries or in the morgue of the newspaper office. Senior citizen centers are good places to conduct interviews about how the military base or factory affected the local community. Using text and image editing software or traditional art materials, have each student design 1-3 pages to display their findings with images and text. Take the students' pages and create a class booklet on how their region experienced the War.

Activity 3: War and the Individual Encourage students to invite a veteran of Operation Desert Storm or Operation Iraqi Freedom to visit the classroom to describe another recent military engagement where climate and logistical problems played a very large role. After the presentation, have students discuss similarities and differences between the two battles. Then ask them to write an essay on the role of the ordinary soldier (both American and Japanese) during the crisis of war.

Consider also directing your students to listen to one or more interviews with veterans of the Aleutians Campaign. These veterans' voices and images put a distinctly human face on this piece of American history.