Ages and Stages: The Life of a Hawaiian Volcano 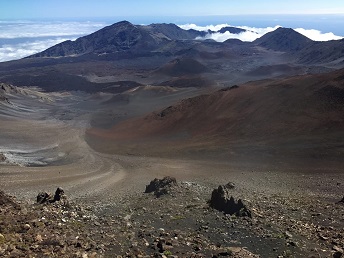 4-ESS1-1, 4-ESS2-1, 4-ESS2-2
Thinking Skills:
Remembering: Recalling or recognizing information ideas, and principles. Understanding: Understand the main idea of material heard, viewed, or read. Interpret or summarize the ideas in own words. Analyzing: Break down a concept or idea into parts and show the relationships among the parts.

What are the stages of a Hawaiian Volcano?

How old are the Hawaiian Islands?

At the end of this lesson, the students will be able to describe the impacts of deposition, weathering, and erosion on landforms.

The relative age of an island or atoll can be determined based on its state of growth or erosion. The Hawaiian archipelago rides on the Pacific Plate that is moving in a northwesterly direction. The oldest islands in the archipelago are located far to the northwest of the main Hawaiian Islands. The youngest island (Lō‘ihi) is forming under the ocean off the eastern coast of the Big Island of Hawai‘i.

The island of Hawai‘i is approaching mid-life, while Lō‘ihi (still submerged) is still in the deep submarine stage. By contrast, Kure and Midway atolls are in the final stages of the life cycle of an island. The formation of fringing reefs combined with gradual sinking and erosion of an island causes it to eventually disappear from the surface of the ocean. During this process, reefs grow vertically (upward) and begin to surround the island, eventually becoming separated from the island by a lagoon. If sinking continues, the island disappears and only a circular reef remains --- an atoll.

These websites provide background information about each of the islands and atolls of the Northwestern Hawaiian Islands.

Evolution of a Hawaiian Volcano Worksheet

Right here on Maui we can see the aging of a volcanic island. West Maui is showing the signs of its age. It is nearly 750,000 years older than East Maui. Instead of wrinkles, it has ______ to tell its age? = Valleys. It’s fun to learn about how the Hawaiian Islands have formed and are changing as they age. Let’s learn about the life of a Hawaiian volcano!

Review the concept of plate tectonics and hot spot theory to explain how volcanoes are formed over a single spot in the ocean floor, become islands, and drift toward the northwest. This map shows all islands and atolls in the archipelago: http://www.papahanaumokuakea.gov/education/pdf/pmnm_map_poster.pdf

Step 3: Introduce the Eight Stages of a Hawaiian Island

Hand out the Evolution of a Hawaiian Volcano Worksheet and ask students to number the images of the volcano from 1 to 8 in the order they occur.

Atoll: Circular reef remaining after a volcanic island has completely eroded beneath the sea.

Subaerial stage: The above ground stage in the formation of a volcano.

Submarine stage: The underwater stage in the formation of a volcano.