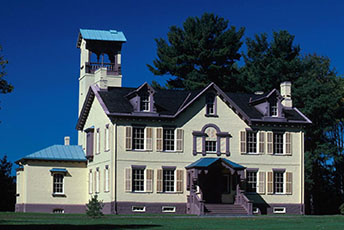 What role does the idea of "home" play in our lives?

1. To describe Van Buren's character as reflected in his lifestyle;
2. To explain Van Buren's political views and his role the Jacksonian Era;
3. To understand national issues of the 1830s and positions taken by political parties;
4. To identify ways in which political campaigns act as expressions of popular culture;
5. To compare Van Buren's attitude toward the depression of 1837 with Herbert Hoover's stance toward the Great Depression of the 1930s;
6. To study a recent campaign in their area.

"Ex-President Van Buren returned to the place of his nativity on Saturday last...after the lapse of a long series of years, spent in the service of his country, he has returned to the home of his youth, probably to spend the evening of his days among those who have long appreciated the splendor of his genius and admired his virtues."
-Kinderhook Sentinel, May 1841

Upon the end of his presidential term in 1841, Martin Van Buren did indeed move to his recently purchased estate, located only two miles away from the small New York village of Kinderhook, where he was born and raised. At this estate, which he called Lindenwald, the skillful politician, loyal successor to President Andrew Jackson, and eighth president of the United States (1837-1841) spent his retirement years.

Restored to the period of his occupancy (1841-62), Lindenwald reflects the refined sense of fashion and the comfortable way of life of a sophisticate. It is the home of a small town boy who ultimately rose to the presidency and who, along the way, acquired a taste for the finer things in life. In decorating his home, he spared no expense. Fifty-one elaborate imported wallpaper panels formed a mural-like hunting scene in the hall. Fine furniture and Brussels carpets added to the elegance. The estate also provides evidence that the man had not forgotten his origins. He was comfortable living as a well-to-do farmer in the Kinderhook region where he was born.

Martin Van Buren (1782-1862), the eighth president of the United States, was called the "Sly Fox" and the "Little Magician" because he was a clever and beguiling politician, proficient at manipulation, persuasion, party organization, and compromise. His political career spanned three decades.

Early 19th-century politics was characterized by boisterous personalities, opposing interest groups, and ill-defined political parties. In the 1824 presidential election, all four candidates claimed the Democratic-Republicans as their party. Van Buren, then a U.S. senator, believed it was time for the renewal of the two-party system. By the 1828 election, Andrew Jackson, supported by Van Buren, was running under what would soon be called the Democratic party. The opposing party was known as the National Republicans.

Van Buren was a friend, trusted adviser, and vice president to Andrew Jackson during the latter’s second term in office (1833-37). When he became president in 1837, Van Buren’s own administration continued the policies of the new Democratic party established under “Old Hickory.” The principles espoused by the young party, which Van Buren helped form, included states’ rights, limited powers of federal government, and strict constitutional construction. The opposing party, the Whigs (formerly the National Republicans), were united by their disdain for Jacksonian policy and their approval of active government programs.

As soon as Van Buren took office, he faced a serious financial panic and depression. True to Jacksonian laissez-faire philosophy, Van Buren called for the creation of an independent treasury system that would separate the federal government from the banking system. The Independent Treasury Bill, passed in 1840, had no real impact on the economy, however. Furthermore, it alienated many of Van Buren’s fellow Democrats.

In the 1840 election, Van Buren ran against the Whig candidate, William Henry Harrison, hero of the Battle of Tippecanoe. Rather than establishing a strong political platform, the Whigs ran a “hurrah” campaign in which they used symbolism and slogans to rally the people behind Harrison and against Van Buren. The image of Harrison in a log cabin sipping cider convinced voters that he was a man of the people. By contrast, the Whigs depicted Van Buren as an aristocrat living in high style in the White House while people were suffering from the depression. The enthusiasm for “Tippecanoe and Tyler Too,” coupled with the country’s severe economic crisis, made it impossible for Van Buren to win a second term.

Biographies of Martin Van Buren
The following include: National Archives (NARA)
The Archives has placed on its web site a large number of items about Martin Van Buren and his presidency. To find them, visit the NARA search engine.