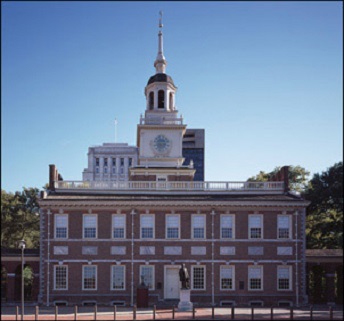 Grade Level:
Middle School: Sixth Grade through Eighth Grade
Subject:
Literacy and Language Arts,Social Studies
Lesson Duration:
90 Minutes
Common Core Standards:
6-8.RH.2, 6-8.RH.3, 6-8.RH.4, 6-8.RH.5, 6-8.RH.6, 6-8.RH.7, 6-8.RH.8, 6-8.RH.9, 6-8.RH.10, 9-10.RH.1, 9-10.RH.2, 9-10.RH.3, 9-10.RH.4, 9-10.RH.5, 9-10.RH.6, 9-10.RH.7, 9-10.RH.8, 9-10.RH.9, 9-10.RH.10
Additional Standards:
US History Era 3 Standard 3A: The student understands the issues involved in the creation of the United States Constitution and the new government it established.
Curriculum Standards for Social Studies from the National Council for the Social Studies.
Thinking Skills:
Remembering: Recalling or recognizing information ideas, and principles. Understanding: Understand the main idea of material heard, viewed, or read. Interpret or summarize the ideas in own words. Applying: Apply an abstract idea in a concrete situation to solve a problem or relate it to a prior experience. Analyzing: Break down a concept or idea into parts and show the relationships among the parts. Creating: Bring together parts (elements, compounds) of knowledge to form a whole and build relationships for NEW situations. Evaluating: Make informed judgements about the value of ideas or materials. Use standards and criteria to support opinions and views.

Why is Independence Hall a World Heritage Site?

1. To examine the results of the Second Continental Congress and the Constitutional Convention in Philadelphia;
2. To explain the principles of the Declaration of Independence and the Constitution and consider the global impact of both documents;
3. To describe the significance of Independence Hall and its nomination as a World Heritage Site;
5. To find and conduct research on local government buildings.

Time Period: Mid 18th century through early 21st century
Topics: This lesson could be used in American history, social studies, government, civics, and geography courses in units on colonial America, the early National period, American political history, or the global influence of American democratic political ideals. The lesson also could be used in a unit on commemoration or Heritage Conservation.

"We hold these truths to be self-evident, that all men are created equal, that they are endowed by their Creator with certain unalienable Rights, that among these are Life, Liberty and the pursuit of Happiness. That to secure these rights, Governments are instituted among Men, deriving their just powers from the consent of the governed. That whenever any Form of Government becomes destructive of these ends, it is the Right of the People to alter or to abolish it, and to institute new Government, laying its foundation on such principles and organizing its powers in such form, as to them shall seem most likely to effect their Safety and Happiness."


The powerful sentiments eloquently expressed in the Declaration of Independence called a new nation into being in July 1776. After months of intense debate in the Assembly Room of the Pennsylvania State House in Philadelphia, delegates to the Second Continental Congress had at last voted to declare independence. For much of the ensuing Revolutionary War, Congress met and conducted the affairs of the young nation from the State House. In the summer of 1787, when it had become apparent that the Articles of Confederation needed to be revised to allow for a stronger national government, delegates once again gathered in Philadelphia. Despite the stifling summer heat, members of the Constitutional Convention spent four long months hammering out the United States Constitution behind closed doors and windows.

Known today as Independence Hall, the stately, red brick building where our Founding Fathers made a stand against tyranny and later forged a framework for a national government speaks timelessly of freedom, democracy, and the human spirit. The enduring principles and philosophies expressed in the Declaration of Independence and the Constitution have inspired numerous countries around the globe over the past two centuries. Recognizing the impact Independence Hall has had on governments worldwide, the United Nations made the building a World Heritage Site in 1979. This designation testifies that Independence Hall is an important part of the world's cultural heritage and deserves to be protected for future generations.

To a large extent, the history of colonial America was defined by a struggle between European powers for control. The desire of both Great Britain and France to dominate territory in North America culminated in the French and Indian War (1754-63). This conflict began in America, but spread to Europe in 1756 where it was referred to as the Seven Years' War. Although Great Britain emerged victorious, the country was severely in debt. King George III decided to make the American colonies pay taxes on goods shipped to America such as sugar, paper, and tea as a way to raise money to help pay for the war. Colonists responded by refusing to buy British products. The King eventually repealed all taxes on British goods except tea, but colonists continued to protest. After the famous Boston Tea Party in 1773, when colonists dumped 342 chests of British tea into the harbor rather than pay taxes on it, the King sent soldiers to Boston to close the port. Other colonies sympathized with the situation in Boston and sent money, food, and supplies. Over the next several months, the relationship between the colonies and the mother country continued to deteriorate.

In September 1774, 55 delegates (men chosen to represent the majority in each colony) gathered in Philadelphia, Pennsylvania, to discuss taxation and the growing rift with Great Britain. The delegates at this meeting, known as the First Continental Congress, wrote a letter to the King listing their complaints and asserting their rights as British subjects. Before adjourning, the delegates recommended that a second meeting take place in Philadelphia the following spring. The King refused to acknowledge the colonies' concerns, and by the time the Second Continental Congress convened at the Pennsylvania State House in May 1775, armed conflict had already erupted at Lexington and Concord.

The Pennsylvania State House, the building we know today as Independence Hall, witnessed the creation of the United States of America. It was in the Assembly Room of this building that members of the Second Continental Congress debated and signed the Declaration of Independence. A decade later, after securing independence by winning the Revolutionary War, delegates to the Constitutional Convention formulated the Constitution in the same room. These documents, hallmarks of democratic ideals and freedom, have not only shaped the United States, but have served as an example for numerous countries struggling for governmental change. In recognition of the role Independence Hall played in influencing governments worldwide, the United Nations inscribed the building on its list of World Heritage Sites in 1979. This designation means that Independence Hall is considered to be an important part of the world's culture and deserves to be protected now and for future generations.

National Park Service
History Division
The National Park Service History Program maintains the Signers of the Constitution web pages. Included on the site are biographical sketches of the delegates and information on buildings and sites associated with the signers.

National Park Service
Heritage Education Services
The Teaching with Historic Places (TwHP) website contains more than 130 curriculum-based lesson plans on places listed in the National Register of Historic Places. For information on the evolution of the Liberty Bell as a symbol of freedom and its use by the Women's Suffrage Movement, Civil Rights Movement, and others, read the lesson plan, The Liberty Bell: From Obscurity to Icon.

InterConnections 21
InterConnections 21 is an organization devoted to making connections between the local and the global, the current and next generations, and hometown schools and the halls of the United Nations. The InterConnections 21 website contains the report of the first World Heritage Education workshop held in the U.S., which took place in Philadelphia in January 2005. The report contains details of in-depth working sessions on preservation issues, Independence Hall and cultural identity, the Underground Railroad and the slave trade in Philadelphia, the impact of tourism, and education at Independence Hall. It also explores how World Heritage Education links with national guidelines for curriculum standards in social studies.

International Council on Monuments and Sites (ICOMOS)
ICOMOS is an international non-governmental association of professionals, dedicated to the conservation of the world's historic monuments and sites. The ICOMOS website contains information on conservation principles, techniques, and policies; news about endangered places; an analysis of the World Heritage List; records of meetings and assemblies; and other work of the organization. The U.S. National Committee of the International Council on Monuments and Sites (US/ICOMOS) is one of numerous committees forming a worldwide alliance for the study and conservation of historic buildings, districts, and sites. It is the focus of international cultural resources exchange in the United States and as such shares preservation information and expertise worldwide. Visit the US/ICOMOS website for more information.

TeachingAmericanHistory.org
The TeachingAmericanHistory.org website is a project of the Ashbrook Center for Public Affairs at Ashland University. The Ashbrook Center provides an academic forum for the study, research, and discussion of the principles and practices of American Constitutional government and politics. The Constitutional Convention web pages provide extensive information including a day-by-day summary of the Convention, James Madison's notes from the Convention, biographies of the delegates, and an interactive map of Philadelphia.