In 2016, WGN America launched Underground, a thrilling TV series that continues to receive critical acclaim for its gripping portrayal of the Underground Railroad. “Underground” follows a group of courageous men and women who use their ingenuity, power and perseverance to attempt the greatest escape in history and break free, despite the dire consequences that awaited them on the other side. The show’s second season, which began airing this past March, broke rating records for the cable network and continues to trend nationally on Twitter every Wednesday night.

In the critically acclaimed second season, creators Misha Green and Joe Pokaski introduced Harriet Tubman brought to life by actress Aisha Hinds, whose powerful portrayal of Tubman quickly enthralled audiences. An entire episode entitled "Minty" was dedicated to Tubman’s story (Tubman’s nickname), featuring Hinds delivering an hour-long monumental and definitive speech as Tubman. This revolutionary episode, described as one of the greatest in television history, received rave reviews across the board, and called “Remarkable” by both The Associated Press and The New York Times.

Series Creators Misha Green and Joe Pokaski will join actress Aisha Hinds in a moderated panel session to discuss the groundbreaking series, sharing the inspiration behind the series and the importance of bringing this larger than life story of American heroes to the small screen. 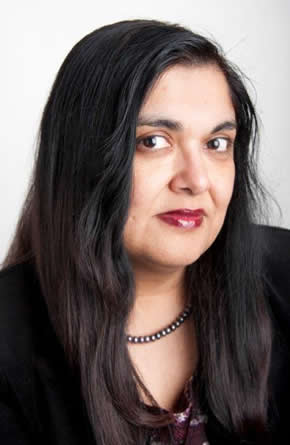 Manisha Sinha is professor and the James L. and Shirley A. Draper Chair in Early American History. She was born in India and received her Ph.D from Columbia University where her dissertation was nominated for the Bancroft prize. She was awarded the Chancellor’s Medal, the highest honor bestowed on faculty and received the Distinguished Graduate Mentor Award in Recognition of Outstanding Graduate Teaching and Advising from the University of Massachusetts, Amherst, where she taught for over twenty years. Her recent book The Slave’s Cause has been reviewed by the Wall Street Journal, The New York Times, The Christian Science Monitor, The Atlantic, and the Boston Globe, among other newspapers and journals. It was featured as the Editor’s Choice of the New York Times Book Review. Her first book, The Counterrevolution of Slavery, was named one of the ten best books on slavery in Politico in 2015.

Her research interests lie in early United States history, especially the transnational histories of slavery and abolition and the history of the Civil War and Reconstruction. She is a member of the Council of Advisors of the Lapidus Center for the Historical Analysis of Transatlantic Slavery at the Schomburg Center, New York Public Library, co-editor of the “Race and the Atlantic World, 1700-1900,” series of the University of Georgia Press, and is on the editorial board of the Journal of the Civil War Era. She has written for The New York Times, The New York Daily News, Time Magazine, and The Huffington Post and been interviewed by The Times of London and The Boston Globe. She appeared on Jon Stewart’s The Daily Show in 2014. She was an adviser and on-screen expert for the Emmy nominated PBS documentary, The Abolitionists (2013), which is a part of the NEH funded Created Equal film series. Professor Sinha is on leave for the 2016-2017 academic year working on her new book on abolition and the making of Radical Reconstruction.

Received historical wisdom casts abolitionists as bourgeois, mostly white reformers burdened by racial paternalism and economic conservatism. Manisha Sinha overturns this image, broadening her scope beyond the antebellum period usually associated with abolitionism and recasting it as a radical social movement in which men and women, black and white, free and enslaved found common ground in causes ranging from feminism and utopian socialism to anti-imperialism and efforts to defend the rights of labor. Drawing on extensive archival research, including newly discovered letters and pamphlets, Sinha documents the influence of the Haitian Revolution and the centrality of slave resistance in shaping the ideology and tactics of abolition. This book is a comprehensive new history of the abolition movement in a transnational context. It illustrates how the abolitionist vision ultimately linked the slave’s cause to the struggle to redefine American democracy and human rights across the globe.