Black bears are the smallest North American bear. While black is a common color of their coat, the color can range from black to white, with brown, cinnamon, and even bluish shades in between.

Brown bears and grizzly bears are the same species. The tern "brown bear" is generally used to describe the coastal bears. Because they have access to the plentiful salmon runs, the occassional beached whale, and other sea food (such as clams, mussels, and other fish) and the coastal climate is a little more mild, these bears tend to grow larger than grizzly bears that live primarily in the interior.

Polar bears are considered marine mammals because they spend the most of their time on or near sea ice and are excellent swimmers. They are not commonly seen in parks, though occassionally they can be found in the Arctic parks of Bering Land Bridge National Preserve and Cape Krusenstern National Monument.

Learn more about bears in other parks in the country. And check out this video, Staying Safe in Bear Country. 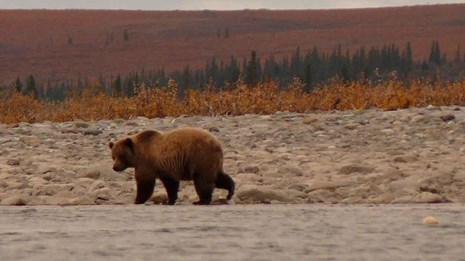 Monitoring Bears in the Arctic Network

Alaska accounts for more than 50% of the remaining North American brown bears and has the second largest population worldwide. 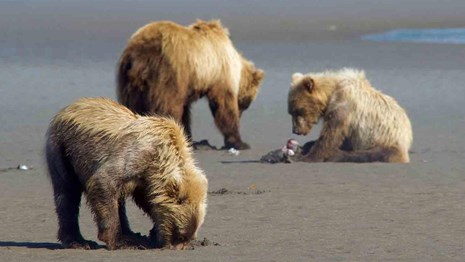 About Bears in Southwest Alaska

Salmon and other seafood are important resources for bears in Southwest Alaska.

Learn more about bears in Alaska