Peter Gansevoort was born in Albany, NY in 1749. The eldest son of Harme Gansevoort, a merchant, brewer, and political figure, and Magdalena Douw, who came from a well-connected Albany family. Gansevoort’s paternal relatives first arrived in New York in 1657, and settled in Albany twenty years later. His earliest military training came at the age of 13 as part of the British force that besieged Havana, Cuba in 1762.

When Continental troops were raised for the invasion of Canada at the start of the Revolutionary War, Gansevoort traded his militia commission for that of a major in the 2nd New York Regiment. That fall, Gansevoort was promoted to the rank of colonel and given command of the 3rd New York Regiment. In the spring of 1777, the 3rd NY was ordered to Fort Schuyler (Stanwix).

Col. Gansevoort commanded the fort during a 21 day British siege in August of 1777. He refused to surrender the post, and in response to a British summons for surrender said: "...It is my determined resolution...to defend this fort and garrison to the last extremity..." Gansevoort's determination won out in the end, and the British were forced to retreat back to Canada. John Adams commented on the siege that “Gansevoort has proven that it is possible to defend a fort.” From the fall of 1777 through 1778, he divided his time between command of the fort and time in Albany with his new bride, Catherine (Van Schaick).

The 3rd NY spent the winter of 1778-79 posted at various points between Saratoga and Schenectady. In 1779, Gansevoort and his regiment took a role in the Sullivan-Clinton expedition against the British allied Six Nations. A bout of illness kept him in Albany during the winter of 1779-80, and he did not rejoin his regiment until the spring of 1780. In July of 1780, Gansevoort's regiment made up part of the garrison at West Point. Later that year he was placed in temporary command of the New York Brigade. In the fall of 1780, the 3rd NY was stationed at various points throughout the upper Hudson Valley, with Gansevoort's headquarters at Fort Saratoga. With the consolidation of 1781, Gansevoort's regiment was absorbed into the 1st NY Regiment and colonel's commission was abolished. Gansevoort then accepted the rank of brigadier general, commanding the Albany County Militia. He held this post until 1809.

After the war, Gansevoort concentrated on rebuilding the family fortune. In 1788, Gansevoort became an Indian Commissioner; and in 1790, became Sheriff of Albany County. In 1800, he was appointed a U.S. Military Agent, and in 1809, a Brigadier General in the U.S. Army. During the winter of 1811, Gansevoort contracted various illnesses that shattered his health. Brigadier General Peter Gansevoort died on July 2, 1812 at the age of 68. His summer home in Gansevoort, New York still stands.

Several of his grandchildren contributed to American history during the 1800s. His granddaughter donated most of his military items to the Smithsonian in the 1800s. One grandson, Guert Gansevoort became an American Naval officer, serving 45 years, through the Mexican-American and American Civil Wars. Another grandson, Herman Melville, became famous in his own right after penning the novel Moby Dick.

Image below: Peter Gansevoort's regimental jacket from his time in the 3rd NY Regiment. He wore this coat during his command of Fort Schuyler in 1777. During the first few years of the war substantial stocks of uniforms were made in such centers as Philadelphia, Baltimore, and Charleston. These uniforms were made with locally woven cloth or from cloth imported from France.
Credit: National Museum of American History/Gift of Mrs. Abraham Lansing (also known as Katherine Gansevoort Lansing, Peter's grandaughter). 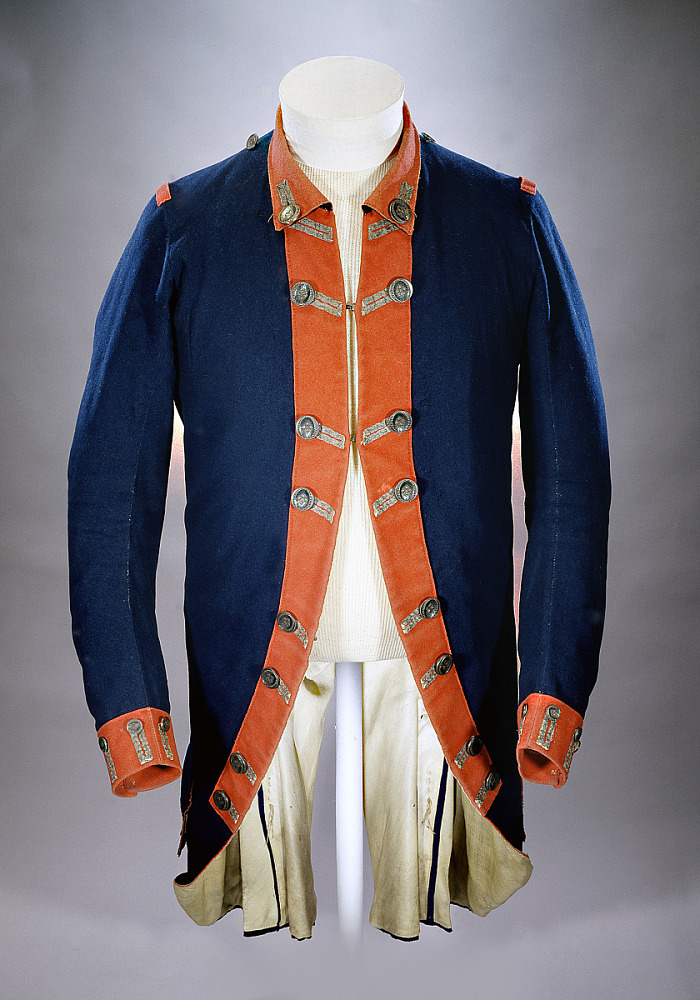