Gilbert Baker was born on June 2nd, 1951 in Kansas. At an early age he found refuge in art but his parents discouraged him from pursuing this hobby. Baker wrote: “But this, after all, was Kansas in 1956... Being an artist was bad in the same way that homosexuality was bad. When I first told my parents that I wanted to be an artist, they responded in extremely negative terms. It was as if I had told them I was also gay.”

His parents relented a bit when Baker won a school art contest with a scholarship to an art academy. Even with his love for art and music, Baker was not happy in Kansas. Baker saw a way out when he was drafted into the army on his 19th birthday in June 1970. A sergeant heavily questioned Baker during his induction process. He began the sexuality screening process by asking, “Are you a homosexual?” Baker responded by saying “no”-- a lie he was used to telling. The sergeant responded, “Are you sure? You sound like one.” Baker continued to deny it, as the sergeant threatened him with dis-honorable discharge and homophobic slurs. Baker maintained his composer and the sergeant finally signed off on the bottom of his form.

Gilbert Baker’s experience only got worse however. During basic training he was subject to more homophobic harassment from superior officers. One day after failing to hit the target on the firing range, the drill sergeant removed Baker from the group and put a watermelon in front of his target. He shot at the melon until it exploded and explained that this is what happens to gay people in the army: “they die”. After this experience, and more threats he was fed up. One morning he refused to carry a weapon, and demanded discharge as a conscientious objector. His colonel accused him of treason. The staff sergeant called Baker into his office and strongly suggested that he become a medic instead. Baker agreed and was sent to a medic training. He excelled in his courses and eventually became a nurse.

“I was assigned to barracks built on the sandy shores of the bay. My cubicle had a window with an unobstructed view of the Golden Gate Bridge.”

Gilbert Baker moved into the military barracks at the Presidio in 1970. He spent his week days working as a medic in Oakland: collecting urine and blood samples for testing from soldiers returning from Vietnam. In his off time, he was with another soldier, a friend. Jim, lived in the same barracks and also worked as a medic in the same facility as Baker. The pair become fast friends: “walking across the Golden Gate Bridge or hiking to the top of the Marin Headlands just to take in its breathtaking sights” Together they explored the forest and beaches of the Presidio and different neighborhoods in the city. The pair soon fell in love but Jim was afraid of being caught. After completing their nursing programs they were sent to different hospitals: Jim went to Okinawa and Baker was stationed in San Francisco.

“I dreamed about him every night. A while later, I heard from a friend that Jim had gotten married and gone back to Tennessee. I cried, but I wasn't going to go back into the closet and get married like him. I was not going to lie about being gay anymore. Falling in love with Jim had changed me. The power of love opened my closet door.” Gilbert Baker came out to his family, and they disowned him. 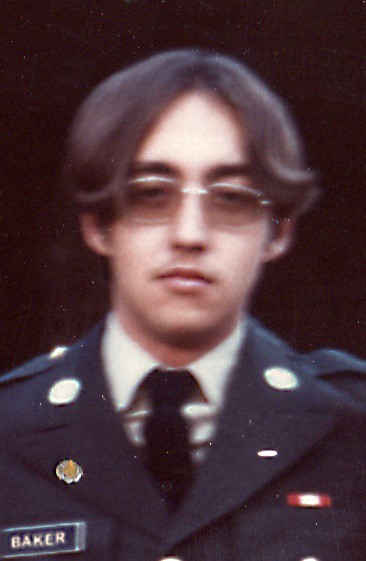 He was able to avoid detection for the remainder of his military service and was honorably discharged in February 1972. He stayed in San Francisco and joined the Gay Liberation Movement. He volunteered at the San Francisco Gay Community Center describing it as “the nerve center of the gay revolution.” He found his home in the graphics committee and with this team, created banners and signs for the center’s protests and marches. In 1975, Gilbert Baker met activist, Harvey Milk. Milk had also served in the military but unlike Baker, was dishonorably discharge because of his sexuality. In 1977, Harvey Milk became the first openly gay person to be elected into public office. In celebration, the activists around Baker implored him to create a new symbol for the LGBTQ+ community.

“We all felt that we needed something that was positive, that celebrated our love.”

Baker became inspired by flags and the connections they had to identity, nationhood and revolution. He decided on a rainbow, to represent the magic and diversity of his community. With the $1,000 given to him by the Gay Freedom Day Parade Committee, Gilbert Baker and a team of his friends created two 60 x 30 feet Rainbow Flags, for The Gay Freedom Day Parade on June 25th 1978.

“As we carried it down the street... A bizarre barrage of glittering coins flew all around us, some splashing onto the street. Drag queens approached and spread flowers in front of our footsteps. All of these people understood what we had worked so hard to create and what it was all about. We laughed until we cried.”

On November 27, 1978 Harvey Milk was assassinated. Harvey Milk drafted a living will ten days after he was elected to office in 1977. He said, “If a bullet should enter my brain, let that bullet destroy every closet door.“ Thousands gathered at city hall to grieve this tremendous loss. The tragedy continued when Milk’s murderer got the lightest possible sentencing. Hate crimes against LGBTQ+ people increased. Baker was attacked on the streets of San Francisco, when he reported it to the police, they laughed.

“I remember what Harvey had said about giving them hope. I planned to sew up hundreds of new Rainbow Flags to make the event colorful at a time when everybody was ready to paint it black. I wanted to show the world we would survive.”

In the wake of these tragedies, Baker wanted to make the 1979 Gay Freedom Day Parade bigger than ever with hundreds of Rainbow Flags. He could not achieve this feat on his own, so he commissioned a local flag company called Paramount Flags to help create four hundred Rainbow Flags to line the streets during the parade. After the 1979 parade the popularity of the Rainbow Flag only continued. The flag company was selling out and homes across The Castro were decorated with rainbow. Baker wrote,

“For many, this purchase was a coming-out, telling the world who they were… no patent or copyright could be issued, as all flag designs are in the public domain. It didn’t bother me.” 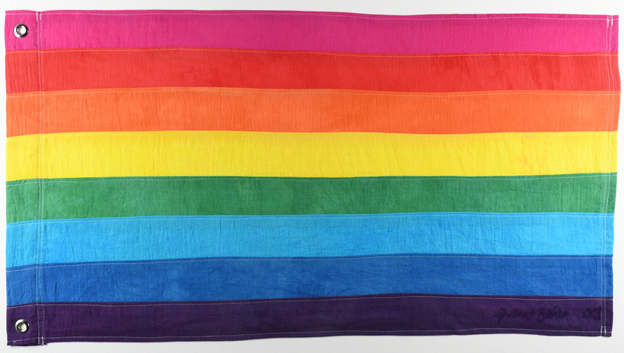 Gilbert Baker continued to use drag and art as his tools for political activism. He joined local drag groups to call attention to discrimination and homophobia. He also got a job with Paramount Flags doing their window displays. He created flags and displays for the mayoral inauguration, state receptions and diplomatic visits, including the 1984 Democratic National Convention in San Francisco.  While his career was thriving, he faced extreme hardship in his personal life. The HIV epidemic was inescapable for the LGBTQ+ community. Baker was losing many friends to the virus and the grief weighed heavy. Baker threw himself into his activism, but his extreme and often controversial efforts lost him work with the state. Baker slipped into a serious depression.

In 1994 he emerged again for the 25th anniversary of the Stonewall Riot. Baker reconnected with former collaborator: Cleve Jones and joined The Stonewall 25 Planning Committee  to come up with something BIG. Together they created the longest rainbow flag in history at 1mile long. For over a year he navigated corporate partnerships, community infighting, and city permits. While living in New York Baker joined ACT UP: AIDS Coalition to Unleash Power. He wrote, “ACT UP made art out of civil disobedience.” The goal was for the Parade to go down prominent 5th Avenue. However, the city of New York pushed the parade to 1st Avenue, a much quieter location. This was unacceptable to the community. So, at the end of the sanctioned Pride Parade on 1st Ave, Baker and his friends cut ten long pieces of the Rainbow Flag and brought them to 5th Avenue where ACT UP was hosting a counter pride march as protest. This display of civil disobedience was a true celebration of the 25th anniversary of the Stonewall Riots. The event made national news and brought the pride flag into the mainstream.

For the remainder of his life, Gilbert Baker pushed boundaries and gender norms. When Marriage Equality was legalized, historic places around the world were lit up in rainbow, including the White House. In 2016, Gilbert Baker was invited to the White House to personally present President Barack Obama with a small hand dyed Rainbow Flag.