Fred Korematsu was a civil rights leader and pioneer. When the Army forced Japanese Americans into concentration camps during WWII, Fred Korematsu refused to comply with the orders. He was arrested and held in the Presidio Stockade until being sent to the camps. Fred Korematsu fought his conviction and internment with his case making it to the U.S. Supreme Court.

Fred Korematsu was born on January 30th 1919 in Oakland California to parents who had immigrated to the United States from Japan. His father, Kakusaburo Korematsu, came to the US in 1905 and his mother Kotsui Korematsu, came to California through Angel Island in 1914. Fred Korematsu was originally named Toyosaburo, but a teacher suggested he go by Fred instead because it’s “easier”. He used this name for the rest of his life. Korematsu lived with his parents and three brothers who all helped out in the family-owned flower nursery.

By 1938, Fred Korematsu was a 19-year-old in love. He was in a relationship with Ida Boitano. On December 7th 1941, “all of a sudden, the music stopped and they announced that Pearl Harbor was attacked by Japanese airplanes... At first, I thought it was a dream. People never did recognize us as Americans even though how much we tried to be American... I said to Ida, ‘We better get back home." The next day President Franklin D. Roosevelt declared war on Japan. 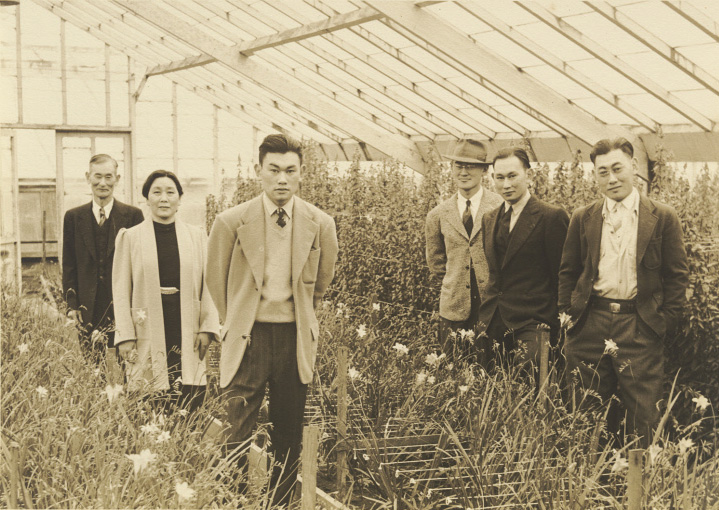 Fred T. Korematsu (center, left) with his parents and brothers at the Stonehurst Flower Nursery that the family owned and operated in East Oakland. Courtesy of The National Portrait Gallery, Smithsonian Institute

Paranoia around espionage and sabotage greatly increased on the West Coast. Roosevelt declared all immigrants of Japanese descent over the age of fourteen were “alien enemies”. Reports of disloyalty circulated through the media, however there were no examples of sabotage by any Japanese Americans throughout the war. Despite this, Lieutenant General John L. DeWitt at the Presidio Army Base made plans and justifications for the removal of Japanese Americans from the West Coast. On February 19, 1942, President Franklin D. Roosevelt signed Executive Order 9066, giving full authority to the War Department to carry out DeWitt’s plan. The order itself did not have language based on race, but granted military authority to declare areas “from which any or all persons may be excluded”.

On March 24, 1942 all individuals of Japanese Ancestry were to report to Assembly Centers where they would be held until the permanent camps were finished. The Korematsu family leased their flower nursery before leaving. Fred had other plans. He said, “I decided to leave… [a]way from the family because there was so much sadness[…] to be pushed into evacuation, threatened with punishment, because you look like the enemy is wrong… I felt that I was an American citizen and I had as much rights as anyone else. I don’t even have ties with Japan nor have I ever been there. To be accused like this, I just thought it wasn’t fair. It was wrong.”

Until he could make plans to leave the West Coast, Korematsu decided to stay in the Bay Area. He went so far as to forge his identification to say his name was Clyde Sarah and got a job as a welder. However, on May 30th, an officer stopped Fred and his girlfriend on the street, arresting him on the spot. After a short time in county jail, Korematsu was transferred to the Presidio Stockade. This is where he would have one of the most important meetings of his life. A guard told him he had a visitor and took him to meet a young man in a grey suit: Ernest Besig. Besig was an attorney with the American Civil Liberties Union (ACLU) and wanted to support Korematsu in fighting his arrest. He warned Korematsu that his chances of winning were slim but that Besig wanted to take the case all the way to the U.S. Supreme Court. Korematsu agreed.

On June 28th, Fred Korematsu was transferred to Tanforan Racetrack, a fairground that incarcerated thousands of individuals, including his family. They were reunited but incredibly upset about his arrest and his choice to fight his case. Fred Korematsu received the same response from others in the camp. He felt incredibly lonely and isolated. He tried to keep in contact with Ida, but he never saw her again.

Fred was transported from Tanforan after charges were filed against him for violating the law by “remain[ing] in that portion of Military Area No.1 covered by Civilian Exclusion Order no.34.” Bail was set at $2,500 and Besig paid the bail immediately. Korematsu and Besig began to walk out of the courthouse towards freedom, but they were stopped by the Military Police (MP). The judge then nullified his right to bail. Once back at the Presidio, Fred Korematsu was taken back to Tanforan. 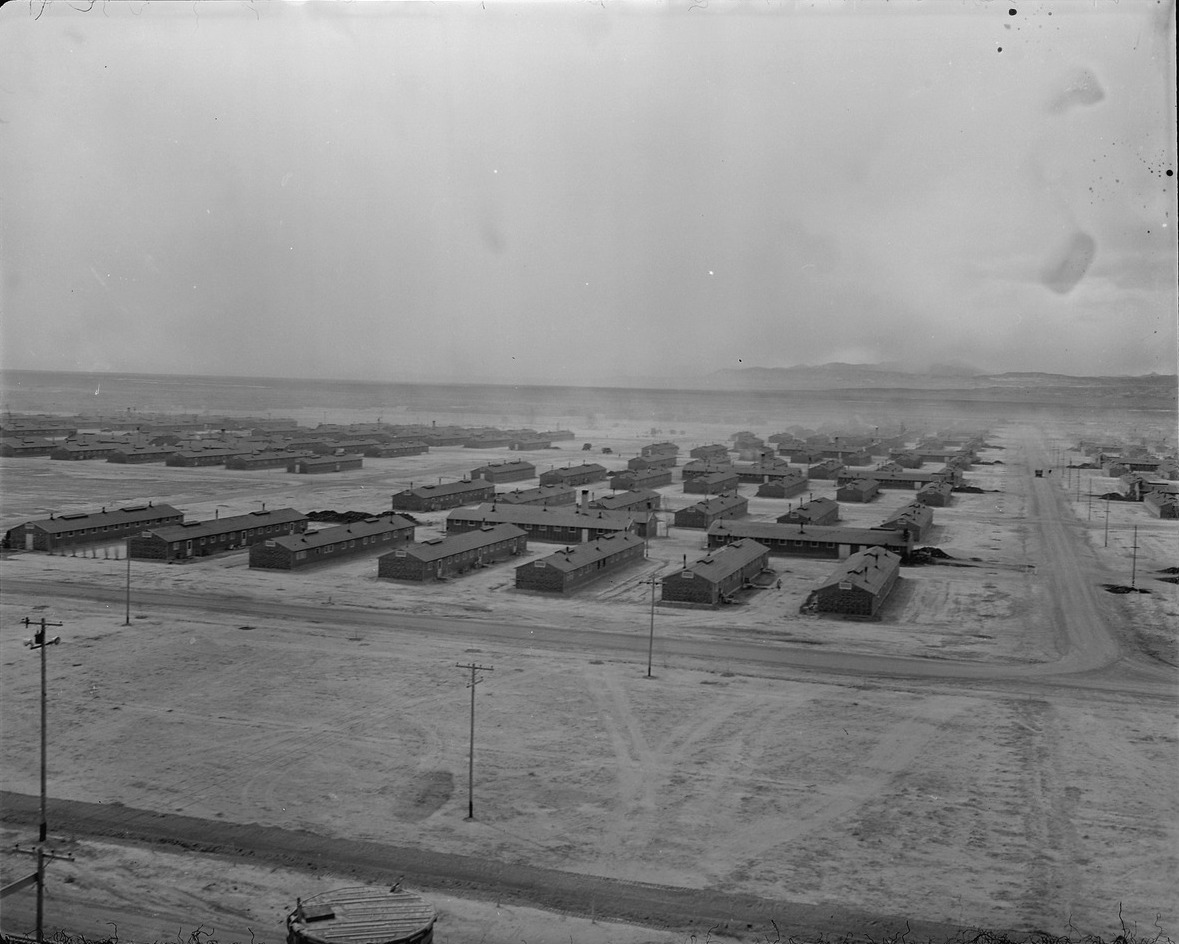 In September 1942, Fred Korematsu and his family were transferred to a concentration camp at Topaz, Utah. “It's terribly dusty here the top soil here is like flour. Just a little wind and the dust rises like fog all over... You can’t see ten feet in front of you.” Panoramic view of Central Utah Relocation Center, 1943. Courtesy of the National Archives and Records Administration

Korematsu vs. The United States

Starting in October of 1942, people could apply for leave from the camps if they had evidence of employment and stayed away from the West Coast. A loyalty questionnaire created a more efficient process. The questions centered around loyalty to the United States to which Korematsu answered YES to these questions. By January 1944, Korematsu’s application for indefinite leave from Topaz was approved. By October he had settled in Detroit with his brothers.

Meanwhile the Korematsu court case had made its way through the legal system. With every guilty decision made, Korematsu’s lawyers always appealed until his case made it to the U.S. Supreme Court. The Supreme Court had already heard cases brought by Gordon Hirabayashi and Minoru Yasui in which they upheld DeWitt’s curfew order. Korematsu vs. The United States argued that the incarceration of Japanese Americans was unconstitutional. The Supreme Court heard arguments for the Korematsu case on October 11th, 1944. The court also heard arguments for another case that day, Ex Parte Endo. This case was put forward by Mitsuye Endo. She petitioned for habeas corpus: the right of a person under arrest to be brought before a judge to determine if their detention is lawful. By the time the court heard her case she had been confined for three years.

The Supreme Court gave a ruling for both cases on December 18th, 1944. The court affirmed Korematsu’s conviction and upheld the removal orders. The majority opinion refused to address the racism in the case. However, the Court ruled unanimously in favor of Endo, stating that once a citizen’s loyalty had been established they could no longer be detained. On December 17th, 1944, one day before the court's decisions, the War Department announced that Japanese Americans who had proved their loyalty were allowed to leave the camps in the new year. The Supreme Court had managed to avoid truly addressing the issue, but their silence on the matter spoke volumes. Korematsu said of the decision, “I received a letter from Mr. Besig and he told me that we lost in the Supreme Court. And I just could not believe it… When I found out that I lost my decision, I thought I lost my country.”

The West Coast reopened to Japanese Americans in December of 1944. Fred Korematsu’s brothers moved back to Oakland to reopen the nursery. The place was in shambles, the green house full of broken windows. Kakusaburo and Kotsui Korematsu left Topaz to join them in May 1945, they had been in camp for over three years. Fred stayed in Detroit where he met his wife, Kathryn Pearson. Time in the camp had taken a toll on his mother. Fred and his wife moved to California to be close to her and raised two children. His children did not learn of Korematsu’s case until they studied it in high school, because Korematsu did not share much. Even though he would have liked to fight his conviction, he decided to move on with his life.

In December 1981, Fred Korematsu received a phone call from Peter Irons who was a professor, lawyer, and was writing a book on WWII Supreme Court cases. He had found information that he knew Fred needed to see. When looking through the Korematsu case information at the Department of Justice, Irons had found concrete evidence that the government had falsified the information they shared with the Supreme Court.  When Peter Irons made Korematsu aware of how his case was mishandled, Korematsu asked him to reopen the case. Irons contacted Dale Minami, a Japanese American lawyer in the Bay Area, to represent Fred. In the hopes of preventing Korematsu from addressing his conviction, the government offered him a pardon. Korematsu responded: “I don’t want a pardon. If anything, I should be pardoning the government.”

Forty years earlier, Fred Korematsu fought his conviction without the support of his community. When reopening his case, his community stood firmly in support of him. On November 10th, 1983, Korematsu and his team had their day in court in San Francisco with United States District Court Judge Marilyn Patel. Fred Korematsu stood before the bench and a filled courtroom. Understanding the significance of the case, Judge Patel delivered her verdict from the bench. Patel stated, “[t]he conviction that was handed down in this court and affirmed by the Supreme Court in Korematsu v. United States is… vacated and the underlying indictment dismissed.” Korematsu and his team had achieved their goal in clearing Korematsu’s federal record, and the courtroom erupted in celebration.

However, Fred understood there was more work to be done. He said, “Having this conviction cleared, I am very happy. But...I would like to have it completely cleared from the record and that this will never happen again to any American citizen.”

Only the Supreme Court could overturn their previous decision and to this day that decision stands. Fred Korematsu continued to fight for the civil rights of all Americans. He lobbied in Congress to pass the Civil Liberties Act of 1988. This act gave a public apology and compensation to Japanese Americans who were incarcerated. In 1998, Korematsu was awarded the Presidential Medal of Freedom. Fred Korematsu passed away on March 30th, 2005 at the age of 86. January 30th, his birthday, is now Fred Korematsu Day in the state of California.