Along the southern California coast and throughout the country, National Park Service managers are tasked with protecting America’s most cherished places. Knowing which resources are found in our National Parks, and whether those resources are stable or changing, can help park managers make sound, science-based decisions about the future.

The Mediterranean Coast Network is one of 32 networks helping to provide that knowledge. Our scientists and partners collect long-term data on a suite of key park resources—like native plant communities, wildlife, and water quality. We analyze the results and report them to park managers, who can use what we've learned to make informed decisions.

You only find them in five places around the world. You can find it here in Southern California. And then you find it in South Africa, Australia, South America, and Chile. They are adjacent to marine ecosystems, and they actually are influenced by the ocean.

The Mediterranean Coast Network consists of Santa Monica Mountains National Recreation Area, Channel Islands National Park, Cabrillo National Monument. And we have a team of scientists that are monitoring what's going on in the different parks. And they're measuring the vital signs.

The Rocky Intertidal Zone is where the ocean comes up to meet the land. This is one of the most extreme ecosystems on Earth. Here on the edge of land and sea, life is dictated by the changing tides. Every animal is adapted uniquely to this environment to withstand the pressures.

Cabrillo National Monument is located on the southernmost tip of the Point Loma Peninsula. We're tasked with protecting 160 acres of Rocky Intertidal Zone and Mediterranean Coast ecosystem. As resource biologists, we carry out this mission by collecting long-term ecological data in the form of inventory and monitoring protocols.

When we go out and monitor, it's essentially a health checkup of the Intertidal. We go see who is there, how big they've gotten, and how they've changed over time. We go out to the same places every year, year after year.

We can see changes. And from those trends, we can make management decisions. We began monitoring our Rocky Intertidal Ecosystem in the 1990s. Within the first five years, we found that seven of the 13 species we are looking at were in severe decline.

I think one of the most amazing things about Channel Islands National Park is that half of the park is underwater. The Channel Islands National Park Kelp Forest Monitoring Program was established in 1982. The data we collect includes size and abundance on over 70 different species of fish, invertebrates, and algae. We also collect temperature data and video transect data. So you're actually visually able to see the sites change from year to year.

One of the biggest threats is overfishing. So it's a real threat to the sustainability of the species that live here. And in 2003, the data collected by the Kelp Forest Monitoring Program was essential in establishing a network of marine reserves by the state of California, and helped set aside a refuge for these species. So they're protected from fishing. They're no-take zones.

And what we've seen over the last five and 10 years, is an increase in their abundance, an increase in size. And this is really important. Larger individuals produce more offspring. So we're replenishing the population, and we're also hoping that there'll be some spillover into areas surrounding the reserves that are not protected.

We are the largest urban national park in our country. Millions of people from Los Angeles, from Ventura County, have access to this wonderful open space. We are an urban interface park.

However, we also protect this habitat that provides space for, get this, mountain lions, coyotes, bobcats, raptors. And then a bunch of significant others. Newts, reptiles, a whole bunch of amphibians. It is super-diverse with wildlife.

Data from our inventory and monitoring work has shown us that one of our biggest challenges is habitat fragmentation. So we have the 405, the 101, these freeways that are isolating the wildlife. Everything from the lizards to a big mountain lion that comes across this freeway, and it's a real barrier. This poses the question, what can we do to better connect these isolated spaces, this fragmented landscape, where we give an opportunity to these trapped animals to move between habitats so they could continue their existence?

When this park decided that one of its vital signs was to manage the island fox, to look at the top dog on the island and see what was its health. And they started an inventorying, monitoring program on that particular species. And what they learned in a very short period of time, that fox was on the decline.

What are we going to do? Are we going to lose a species that exists only on the Channel Islands that will be gone forever, or are we going to intervene? And it was inventory and monitoring that told us you had to do something. The flag went up, saying something was broken.

And I am proud to tell you today, after monitoring that particular species, it led to captive breeding of that species. It resulted in the reestablishment of bald eagles on the Channel Islands. Putting that whole package together, we went from an endangered species, the island fox in 2004, to being the fastest recovery of a mammal in the history of the Endangered Species Act, removed from the Endangered Species Act in 2016. All foxes are back in the wild and they're doing well.

One of the most important things I think the public expects of national parks is that we are these special places that have been set aside. And they have this expectation that when they come here, the pieces are all here. That really the ecosystem's intact.

But how do we know that? We say we're a science-based decision making body. And if we're going to do that, we have that good science. I would challenge you to do without an inventory monitoring program. 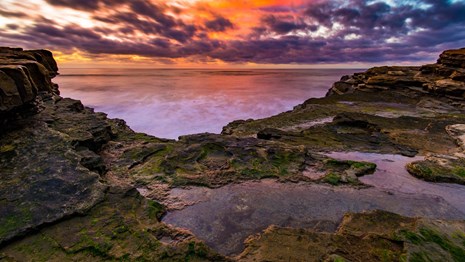 Our parks include globally significant examples of Mediterranean-type ecosystems and coastal marine environments. 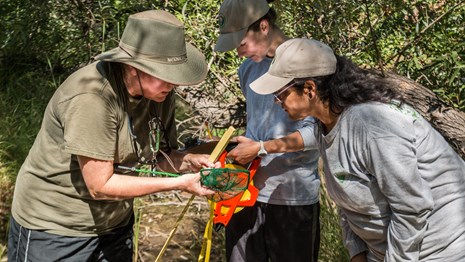 We continually collect data to help evaluate the health and trends of park resources and ecosystems.

What we monitor and why Quick Reads
Show me the data! Monitoring Reports
What’s your climate? Here’s ours! ClimateAnalyzer.org
They're everywhere! Find a Network