The woman suffrage movement in New Hampshire—as in much of New England and the rest of the country—had its roots in the anti-slavery movement. Abolitionist Armenia S. White and her husband Nathaniel founded the New Hampshire Woman Suffrage Association in 1868. White served as the organization’s president until 1895. She continued to hold an honorary leadership position until her death in 1916 at the age of 98. She often opened her home in Concord to suffragist gatherings and donated money to the cause.

Marilla Marks Young Ricker of Dover showed up at the local polling place for the 1870 election and demanded that she be permitted to vote as a property owner and tax-payer. She was turned away but continued to demand the ballot every year for five decades. She was admitted to the New Hampshire bar in 1890; the next year, she was admitted to practice before the U.S. Supreme Court. She ran to represent New Hampshire’s 1st District in Congress in 1897 but did not win. That same year, she petitioned unsuccessfully to become Ambassador to Colombia. She also attempted to run for governor of New Hampshire in 1910 but could not get her name on the ballot because she was not a registered voter. She ran without any expectation of winning but because, she told the Grand Forks Daily Herald, she wanted “to get people in the habit of thinking of women as governors.” She thought it might take at least one hundred years before a woman might be successfully elected, but she wanted “to set the ball rolling. There isn’t a ghost of a reason why a woman should not be governor or president if she wants to be and is capable of it.”

Women in New Hampshire became eligible to serve on school committees in 1871 and won the right to vote in school elections in 1878. In 1887, a bill was introduced in the legislature to enfranchise women in municipal elections but it was defeated. Suffragists campaigned to remove the word “male” from the state constitution’s voter qualification clause during a 1902 state constitutional convention. Although the measure passed in the convention, it was defeated by New Hampshire voters in 1903. Repeated attempts to pass additional woman suffrage legislation were defeated.

These disappointments led many New Hampshire women to turn their efforts towards passing a federal woman suffrage amendment. Sally W. Hovey became chair of the New Hampshire branch of the National Woman’s Party. She participated in the group’s more aggressive lobbying tactics and demonstrations in the fight for enfranchising women through passage of the Susan B. Anthony Amendment.

After decades of arguments for and against women's suffrage, Congress finally approved the 19th Amendment in June 1919. After Congress passed the 19th Amendment, at least 36 states needed to vote in favor of it for it to become law. This process is called ratification.
On September 10, 1919, New Hampshire voted to ratify the 19th Amendment. By August of 1920, 36 states (including New Hampshire) ratified the amendment and it became part of the U.S. Constitution, ensuring that across the country, the right to vote could not be denied based on sex.

Constructed in 1851, the Eagle Hotel is located across the street from the State Capitol Building. It was an important meeting place for politicians. In February of 1913, women’s suffrage organizations held a large banquet at the hotel. Suffragists from across the state attended and several notable figures spoke at the event, including Governor Samuel Felker and William J. Britton, Speaker of the House of Representatives. The Eagle Hotel is listed on the National Register of Historic Places. 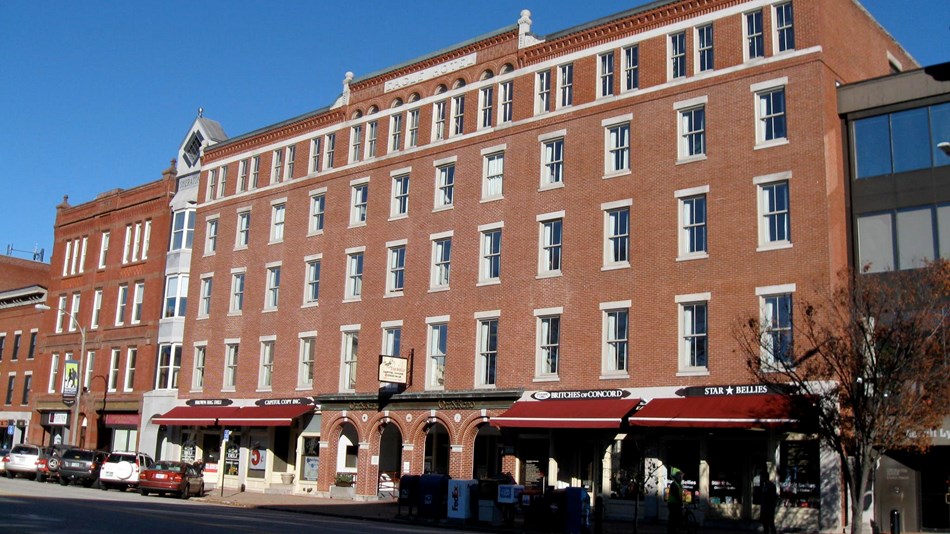 The Eagle Hotel is an important place in the story of ratification. It is listed on the National Register of Historic Places.