Although progress on the federal amendment stalled, women also campaigned for changes to state suffrage requirements to win the vote. In Michigan, women petitioned the legislature for the ballot as early as 1855. After the Civil War, women won limited school board suffrage. Suffragists continually fought for expanded voting rights but saw repeated state constitutional amendments and ballot initiatives defeated over the next decades. Groups like the Michigan State Suffrage Association in Battle Creek and the Michigan Equal Suffrage Association in Flint held rallies and gave lectures about the importance of women’s suffrage. Dr. Anna Howard Shaw, who grew up in Michigan and was the first woman ordained as a Methodist minister, became president of the National American Woman Suffrage Association in 1904. Many Michigan women expanded their efforts to include national as well as statewide suffrage efforts. After years of activism, the women of Michigan won the vote in 1918 through a state constitutional amendment.

The next year, Congress finally passed the 19th Amendment in 1919. After Congress approved the Amendment, at least 36 states needed to vote in favor of it for the amendment to become part of the U.S. Constitution. This process is called ratification.

Michigan became one of the first states to ratify the amendment on June 10, 1919. It passed unanimously.

By August of 1920, 36 states (including Michigan) had ratified the amendment, recognizing women's suffrage rights.

Michigan women fought for the right to vote decades before the passage of the 19th Amendment. They formed suffrage organizations in towns and cities across the state, from Battle Creek to Flint. They also pressured politicians to hold a constitutional convention in 1908. Politicians debated on whether to change the state constitution to include women’s voting rights. That January, suffragists gathered at the State Capitol Building in Lansing. They made arguments for their suffrage rights in front of the constitutional convention delegates.

After women won the vote, Michigan women served in the State Capitol as well. Eva McCall Hamilton was elected to the state senate in 1920. Her work as a Senator included advocacy for women and children, work she continued after she finished her term and joined the Michigan League of Women Voters.Cora Reynolds Anderson was the first woman elected to the Michigan House of Representatives in 1925. The first Native American woman to serve in the Michigan legislature, Anderson focused on public health issues during her term. The State Capitol Building is designated a National Historic Landmark and is open for public tours. 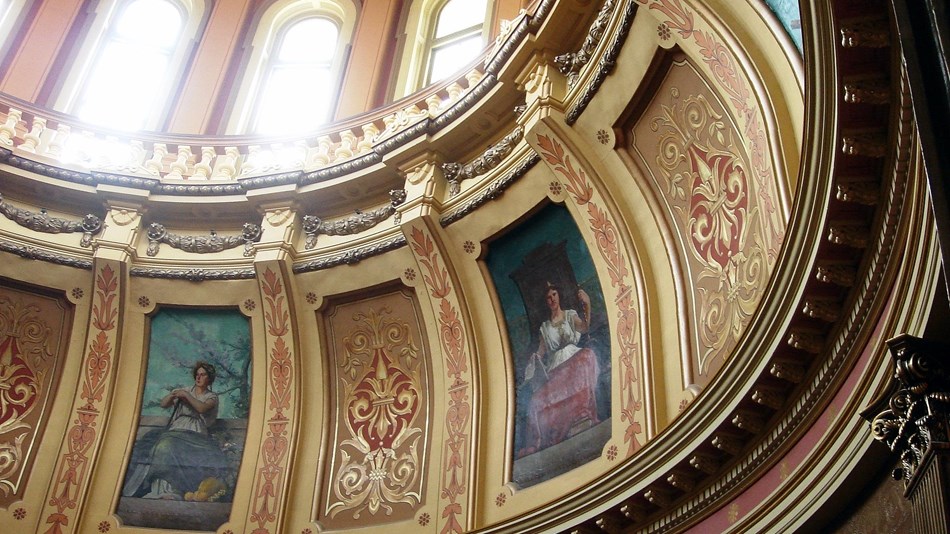 The Michigan State Capitol is an important place in the story of ratification. It is designated as a National Historic Landmark.