Although progress on the federal amendment stalled, women also campaigned for changes to state suffrage requirements to win the vote.Iowa was home to many important suffrage leaders. Amelia Bloomer moved to Council Bluffs in 1854. Bloomer had to sell her popular women’s rights newspaper, The Lily, after she relocated to the frontier state because there were no publishing facilities in her town. She remained a contributor to the paper until it shut down in 1856. She was the president of the Iowa Suffrage Association from 1871-1873. Bloomer remained involved in women’s rights and temperance activism throughout her life. Carrie Chapman Catt, who served two terms as the president of the National American Woman Suffrage Association, grew up in Iowa and received her Bachelor of Science degree from Iowa State College. She was the only woman to graduate with her class in 1880. Catt worked in education in Iowa and was superintendent of schools for Mason City. It was during her term as president of the Iowa Woman Suffrage Association that she met Susan B. Anthony and became involved in the national suffrage movement, speaking before Congress in 1892 in support of an amendment to the US Constitution enfranchising women.

Iowa was the site of one of the nation’s first woman suffrage marches, held in Council Bluffs in 1908. In general, though, Iowa suffragists thought it prudent to win the vote through means other than protests. “Neither demonstration nor argument will gain the ballot for women in Iowa,” suffragist Ruth Gallagher told the Muscatine News-Tribune in March 1916. “To argue is fatal. The one thing we can do is distribute dignified, indisputable literature which will command the attention of the ‘anti’ because of its saneness and authenticity.”

The state suffrage effort saw small victories and many defeats. Iowa women won limited suffrage in 1894. They were able to vote on ballot questions regarding bond or tax issues but not for candidates. To amend the state constitution removing the word “male” from the section that defined eligible voters required passing the resolution through two successive sessions of the state legislature. Since the legislature only met every two years, this was a long process. Several times beginning in 1870, woman suffrage proposals failed during this process. Finally in 1916, a resolution passed through the legislature and was put on the ballot for approval by the voters. Although victory seemed at hand, woman suffrage was voted down. Iowa women could not vote on the suffrage issue in that election.

After decades of arguments for and against women's suffrage, Congress finally passed the 19th Amendment in 1919. After Congress approved it, at least 36 states needed to vote in favor of the amendment for it to become part of the U.S. Constitution. This process is called ratification.

On July 2, 1919, the Iowa legislature voted to ratify the Nineteenth Amendment. By August of 1920, 36 states (including Iowa) ratified the amendment, which ensured that the right to vote could not be denied or abridged based on sex. 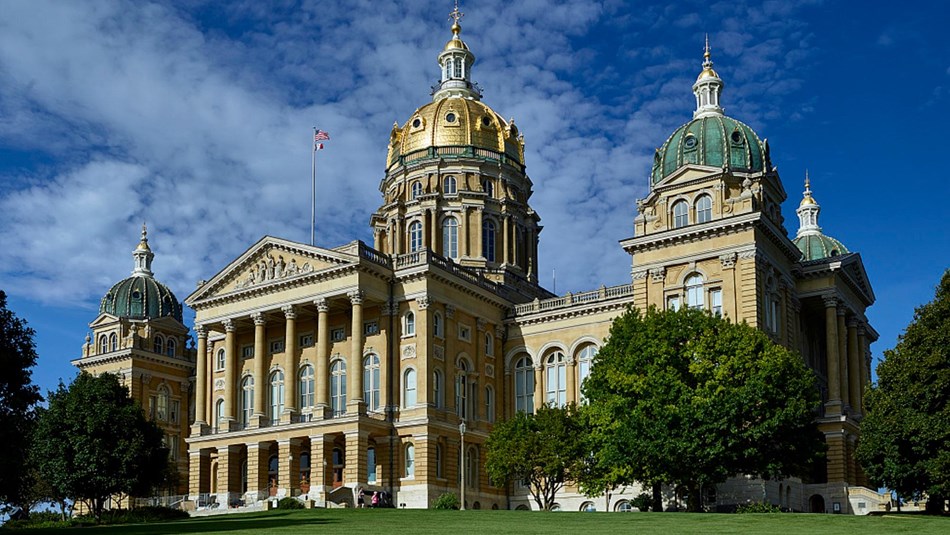 The Iowa State Capitol Building is an important place in the story of ratification. It is listed on the National Register of Historic Places