Distribution and General Characteristics
The boreal forest, also called taiga, is the largest forested habitat in the world, making up one third of the earth’s total forested area. In North America, the boreal forest spreads from Alaska, across Canada, and into the Great Lakes region of the United States. Winters are long and cold, while summers are short, with 50-100 frost-free days. Black and white spruce are typical species of this region, along with tamarack, Jack pine, and balsam fir in these forest types. Deciduous trees include birch, aspen and poplars. Due to the harsh growing conditions, the variety of plant species is relatively low. The soils are often acidic and cold. As a result, mature boreal forests often have thick organic forest floor mat made up of moss and partially decaying dead moss and litter. 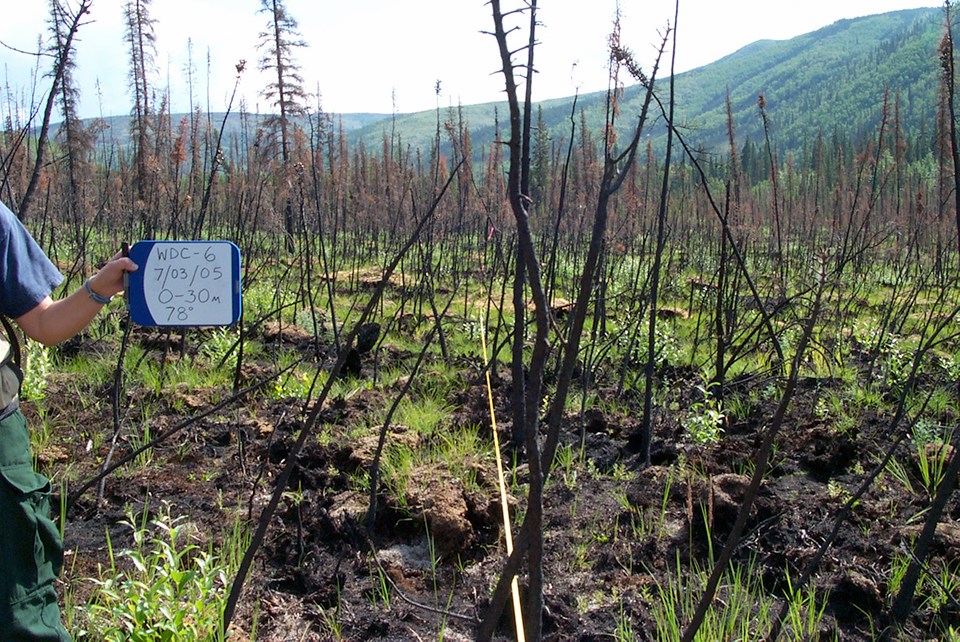 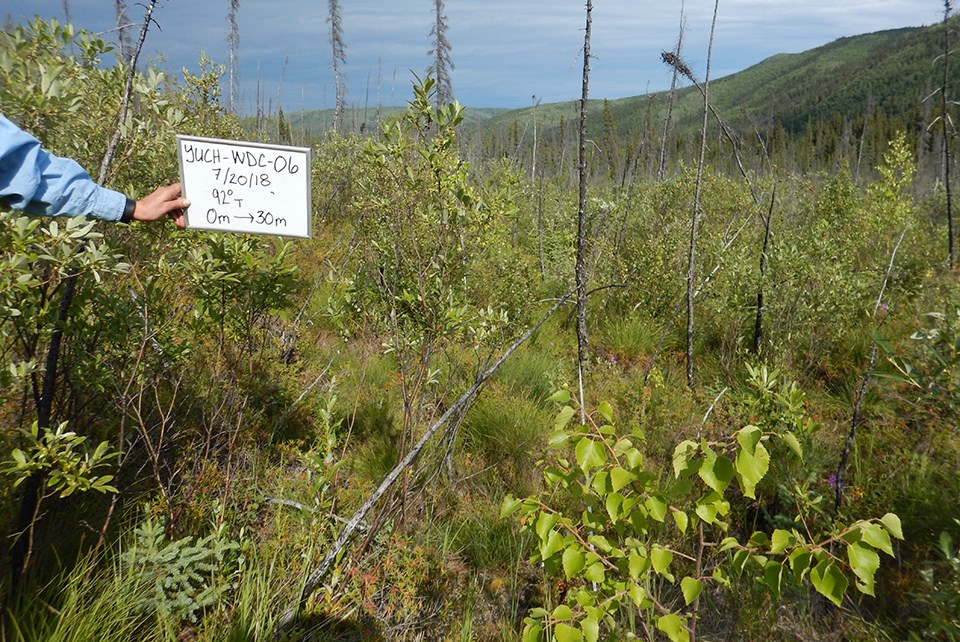 Left image
One year after a fire in a black spruce forest in Yukon-Charley Rivers National Preserve. Grasses and willows have sprouted in the areas that did not burn as deep into the soils.
Credit: NPS

Right image
Fourteen years after the fire, the willow and birch trees are nearly head high. Young spruce seedlings can be seen below the photo board. They will take longer to mature.
Credit: NPS

The boreal forest is adapted to fire. Fires create a variety of landscapes, or mosaic, with young and old trees living on the landscape. In central Alaska, the spruce forest usually burns every 60 years to 150 years. Fires help remove the thick forest floor mat of old forests so that new young forests can begin. Summers can be warm, and lightning commonly starts fires. Black spruce forests, a type of boreal forest, are highly flammable and almost designed to burn. Fire carries well in the understory of black spruce forest. Plants such as feather mosses, lichens, and shrubs in the heather family burn easily. Low hanging branches of the black spruce drape into the flammable moss layer and ground vegetation. The lower branches provide a ladder for the fire to climb to the upper parts of the tree. This creates a crown fire and the upper portions of the trees burn where seed cones occur. Both low and high intensity fires easily kill black spruce due to the tree’s thin bark and shallow root systems.

Even though black spruce burns easily, the trees are adapted to fire. The tight cluster of seed cones at the top of the tree are semi-serotinous. This means that the tree cones release their seeds due to the heat of a fire. Young black spruce seedlings will usually establish in the first 5 to 10 years after a fire. Deciduous trees, such as birch or aspen, come back quickly after fire. In some cases, they sprout from below ground roots or they grow from seeds that blow in from nearby trees. Shrubs such as willow, blueberry, Labrador tea, and shrub birch re-sprout if the fire lightly burns the soil. If a fire burns deeply and burns the roots, the shrubs depend more on seeds to reproduce. Plants with non-woody stems, such as fireweed and grasses, will also become more plentiful soon after a fire. These young forests are important for wildlife. Moose browse the deciduous shrubs and trees. Voles and small animals eat the new green plants. These small animals are prey for owls, fox, and marten. The mosses and lichens that blanket the ground are fuel for the fire and the fire usually burns them completely. New pioneer species of mosses and liverworts start to grow. Over time, as the spruce canopy grows, so will the feather mosses and lichens. These mature forests are important for caribou and many species of birds. Fire is a natural part of the boreal forest.

Boreal forests have burned naturally for thousands of years. Fire managers protect people, communities, and certain areas from fire. In some remote areas, boreal forest fires are managed for their natural benefit. Today, boreal forests are experiencing warmer temperatures and longer summers. There has been an increase in area burning over the past 15 years in Alaska and Canada. Some fires are burning in recently burned areas, shortening how often fire returns to an area. Changes like these can alter which plants and animals live there, thawing of permafrost, and release of soil carbon stocks. Scientists continue to study changes due to more fire in the boreal forest.

Scientists observe plant life and fire over time to learn about changes happening in the national parks. National Park Service fire managers use this information to make decisions. Their goal is to protect resources and help ecosystems stay in balance.