Who Were The Wright Brothers? 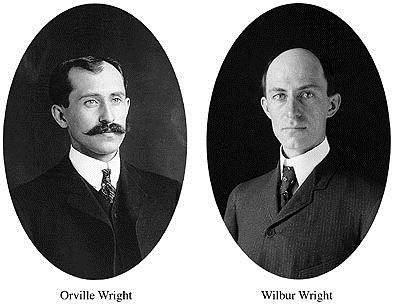 How do events from the past affect your life today?

The student will be able to order events from the Wright brothers lives and discuss how the student’s life would be different had these events not occurred.

The Wright brothers, two young men from Dayton, Ohio came to Kitty Hawk, North Carolina in search of the perfect place to test the first powered aircraft. They faced the challenge of finding a way to control flight. The Wright brothers accomplished the first man powered and controlled flight in history in 1903. This historic event was the first step in many aviation milestones over the years that would greatly impact and change the world.

Introduction- Begin by telling the students that today they are going to begin learning about 2 important people in history. Explain to them that you are going to give them clues about the two people and after all the clues are given you want to see if anyone can guess who we will be learning about. Show the pictures of the two boys as you discuss them.

Students will need the following: Time Line Handout, Read Aloud Book, and the Wright Brothers Photo. For access to the full lesson plan click the lesson materials link below.

The first boy began school at 8 years old. He learned quickly, concentrated in school and had a great memory.  He was considered smart but didn’t love school.  One day while playing hockey he was injured when a hockey stick flew out of someone’s hand and knocked out some of his teeth. A few weeks later the doctors reported he had stomach and heart problems.  Due to his health issues he left school to recover and began studying at home. While at home his mom got very sick. He took care of her but never stopped learning.  He spent many hours in the family library reading. (Wilbur-on the right in the picture)
Boy number 2 was a different kind of student than boy number 1.  His mother let him walk to school in Kindergarten and after a month of school she found out that he wasn’t actually going to school! He was going to a friends house instead! He often had to sit in the front of the class so that the teacher could keep an eye on him.  Outside of school he loved to find ways to make money such as making kites, and toys to sell and even having parades and circuses in which he charged people to attend.  He left school at 17 and began working.  (Orville-on left in the picture)
As the two boys became older they built a printing press together and started a newspaper. They also opened a bicycle repair shop after cycling became a popular hobby.  They eventually designed and constructed their own bikes.
“Does anyone have a guess at the names of these two historical figures that we will be studying about?”  If students don’t guess continue to probe until someone eventually realizes it’s the Wright brothers.  When students have guessed point out the fact that these two men had quite a previous story before even getting to the flight part!

2. After reading have the students cut out each event on the timeline.  Have them work with a partner to put the events in order and glue on to a separate sheet of paper. Students can illustrate each event if time remains.

3. After completing the activity check together as a group to make sure the timeline is in the correct order. Students will keep this to use as a reference for later lessons and will serve as an outline of the Wright brothers’ story.

4.  In conclusion, the Wright brothers made the first very big step of many to come in aviation. What were some of their traits that helped them succeed? Write one paragraph explaining how these events affect your life today.  How would life be different today had the Wright brothers not made that first flight? After students have finished allow for students to share.

Print Press - A machine for printing text or pictures from type or plates.

Glider - A light aircraft that is designed to fly for long periods without using an engine.

Typhoid - An infectious bacterial fever with an eruption of red spots on the chest and abdomen and severe intestinal irritation.

Students will be assessed based on if they were able to accurately order the key events given after listening to the story and through the concluding question and response.