Unsung Patriots: African-Americans at the Battle of Cowpens 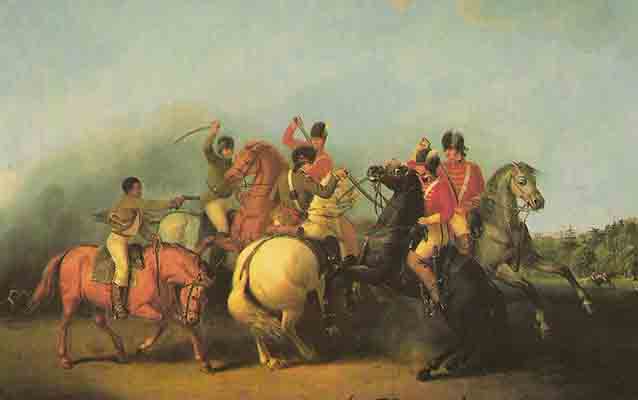 What important role did African-Americans have in the Battle of Cowpens?

GOAL: To introduce to students the role of African-Americans at the Battle of Cowpens in context of the Revolutionary struggle against England and the African-American struggle for freedom.


Colonial South Carolina was possibly the most ethnically diverse among all the colonies. Those of Native-American, African, European, Moorish and Turkish descent inhabited the coastal plain, and such diversity was especially reflected in the Charleston area.

The William Ranney painting (above) shows the famous William Washington-Banastre Tarleton sword fight in which Washington’s servant rode up, fired his pistol at a British officer, and saved Washington’s life. Since most waiters were African-American, Ranney painted him as such. Apparently the servant did not file a pension, and Washington did not leave behind written papers of his own role or of anyone else’s role in the American Revolution. Therefore, the National Park Service cannot document his complete role in the battle and even his name (most likely either Ball/Collins/Collin). On a larger scale, African-Americans in the Revolution had a vested interest in the fight for freedom. Many hoped that liberties embodied in the Declaration of Independence would lead to the abolition of slavery. Many slave-owners, especially those in the Middle States and North, saw the connection between the Declaration and those issues involved in slavery, and freed their slaves (The North generally didn’t have as large an economic motive as the South.) George Washington, for example provided for the manumission of his slaves in his will. Phillis Wheatley wrote so eloquently on the issue that she was granted her freedom.

Slave-holders in the South feared British-inspired slave insurrections. Indeed, numerous slaves fought for the British in hopes that a British victory would offer them freedom. There is no evidence that they fared better under British command, however, than under their former masters. It is in these contexts the following activities are recommended

Kaplan, Sidney and Emma Nogrady Kaplan. The Black Presence in the Era of the American Revolution. Revised Edition. Amherst, Massachusetts: The University of Massachusetts Press, 1989.