Traveling Safely in the Desert 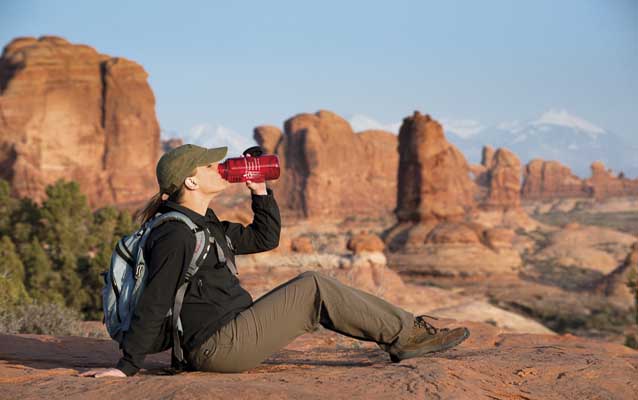 Grade Level:
Upper Elementary: Third Grade through Fifth Grade
Subject:
Literacy and Language Arts,Math,Science,Social Studies
Lesson Duration:
30 Minutes
Additional Standards:
Lesson relates to Physical Fitness and Safety.
Thinking Skills:
Remembering: Recalling or recognizing information ideas, and principles. Understanding: Understand the main idea of material heard, viewed, or read. Interpret or summarize the ideas in own words. Applying: Apply an abstract idea in a concrete situation to solve a problem or relate it to a prior experience. Evaluating: Make informed judgements about the value of ideas or materials. Use standards and criteria to support opinions and views.

What does a person need to survive in desert conditions?

This in-class presentation explores the tools a student needs to hike safely in the desert ecosystem. Students learn their directions, things to bring with them, and what to do if they get lost.

1) Introduce the field trip by printing "Traveling Safely" on the board. Tell students you will be discussing ways of traveling safely when they are in the desert.

3) Tell students that directions help you find your way if you have a compass or if you know your landmarks. Tell students that a landmark is something really big you can see from far away or something really distinctive that everyone would notice. Give students examples of landmarks that would help them to fi nd their way to school. Give an example of landmarks you might see while out hiking (i.e. three canyons coming together, an arch shaped like a whale).

4) Ask students to listen closely to the story you are about to read and think about any mistakes as well as good decisions that the girl in the story makes. Read Lost in the Red Rocks. Have students list Claire’s mistakes, and discuss each mistake (not paying attention to landmarks, where she was going, or to directions). Discuss what Claire could have done or taken with her to make her journey safer.

5) Remind students that Claire was not prepared to go on a hike. Ask students what they should bring with them if they go hiking. List these on the board.

6) Tell students that sometimes even if you are prepared you can get lost. Tell students that if they ever get lost, there are four things they need to do. Explain that all four things start with “S.” Write “Seeking Shelter” on the board. Discuss what would be appropriate shelter in different weather. Write “Stay Put” on the board. Tell students that this is the most important thing to remember. If they remember nothing else, remember to stay put. Tell thestory of the little boy who died a few years ago because he did not stay put. Write “Stay Calm” on the board. Discuss how this is the hardest of all four things to do, because it would be scary to be lost and alone. Discuss things students could do to stay calm and pass the time (i.e. sing songs, make up stories, play games, think of their family). Write “Signal” on the board. Discuss how and when they should signal. Have the class say the four S’s with you. Ask them again, which is the most important thing to do, if they find themselves lost.

Story
Lost in the Red Rocks

Clare was excited. For years, her parents had spoken of the red-rock canyons of southern Utah. During the last month, as they made plans for their trip, it seemed as if they talked of nothing else. Claire had never paid much attention to her parents when they talked of the red-rock country, but as they drove down the road leading to the Needles District of Canyonlands National Park, she couldn’t believe her eyes. She had never seen anything like these red and white sandstone cliff s and spires. Unfortunately, by the time they got to the campground, it was getting dark. Exploring had to wait until morning.

Now it was morning, and although her parents were still asleep, Claire was ready to go. Rather than wake her parents, she decided to go on a short expedition of her own. Deciding breakfast could wait, Claire started up a trail near the campground. The colors of the sunrise and the unfamiliar yuccas, cacti, and twisted juniper trees amazed her. As it warmed up, she wished she had worn her baseball cap.

A lizard scampering across the trail interrupted this thought. Claire left the trail in pursuit of a better look. She lost sight of the lizard, but followed its tracks in the fi ne sand. The tracks went into a slot in the sandstone! The slot was so tempting, just big enough for Claire to squeeze through. It led to a steep, slickrock slope to the top of a flat layer of sandstone. Claire climbed up.

After walking around on the sandstone ledge and taking in the view, she realized she was getting hungry and very thirsty. Even though it was still morning, it was HOT out here.

She decided to find her way back to the campground. Soon, she realized that the ledge she was on dropped off in a vertical cliff on most sides. She started back in the direction she thought she had come from, but found higher cliffs instead. She began to panic and ran along the cliff edge. Before long she tripped on a rock and fell. Her ankle hurt, so she decided to stop and wait to be found. She moved into the shade of a nearby rock.

Before long she heard a human voice. Claire began shouting, and her mother answered back! Very relieved, she thought of breakfast, a cold drink or water, and hiking with her parents next time.

Mistakes or Bad Decisions
• Hiking by herself without telling anyone where she was going
• Not wearing a hat, taking water, food, a map, or a compass
• Not paying attention to directions and landmarks
• Panicking when she realized she was lost

Have students create a lost hiker story or dramatization. Tell them to include what the hiker did to be found, or to find her way, including the use of landmarks.