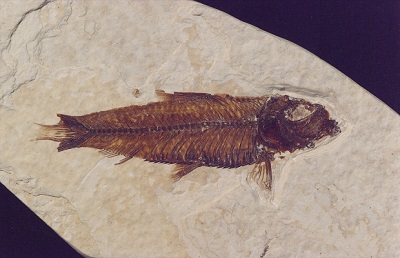 Grade Level:
Upper Elementary: Third Grade through Fifth Grade
Subject:
Science
Lesson Duration:
60 Minutes
State Standards:
Idaho
Standard 1–Nature of Science
Make and record observations and communicate collected data (4-5.S.1.2.1)
Compare and contrast different systems (5.S.1.1.1)
Use models to explain or demonstrate a concept (5.S.1.2.3)
Thinking Skills:
Understanding: Understand the main idea of material heard, viewed, or read. Interpret or summarize the ideas in own words. Applying: Apply an abstract idea in a concrete situation to solve a problem or relate it to a prior experience.

How difficult is it to become a fossil?

By the end of the lesson, students will understand how difficult it is to become a fossil, the steps to becoming a fossil, and how preservation bias plays a role.

Fossils are found in rocks all over the world and help teach scientists about paleo ecosystems. Plants, animals, insects, leaves, seeds and even dung can become a fossil, given adequate conditions. There are many ways in which fossils form, but it is not always easy to become a fossil. Where the organism lives and what its body parts are made of are strong factors that can influence the fate of a potential fossil (This is called preservation bias, discussed below). The fossilization process is broken down into three basic steps.

The first step in becoming a fossil is death. Natural causes, such as predation or disasters could have killed creatures that lived long ago (just as happens today). The second step involves the animal being buried in sediment, preventing it from being eaten by scavengers or decomposed by bacteria. However, certain organisms are more likely to become fossils because of what paleontologists call the preservation bias. This means that not all animals are going to be preserved, and there are conditions that allow for easier preservation than others. Animals with hard parts are more likely to be preserved than animals that have soft bodies. Aquatic animals are more likely to be preserved than terrestrial animals because water ecosystems have greater preservation potential. Preservation potential increases in aquatic environments, low oxygen environments and locations with high sedimentation rates. [Some aquatic ecosystems (like Fossil Lake) have a greater preservation potential than others. Fossil Lake is thought to have been density stratified like an estuary.  Heavier (more dense) salt water occupies the deepest sections of the lake and lighter (less dense) freshwater ‘floats’ above (a remnant of an evaporative phase when the lake was young). This prevents freshwater scavengers from eating dead animals that fell to the bottom of the lake. Lake turnover (where anoxic waters at the bottom mix with oxygen rich water near the surface) did not occur, creating perpetual anoxic conditions along the bottom which discouraged scavengers]. Once an animal dies in a place where preservation is likely, it becomes buried in sediment and protected from scavengers and bacteria. The examination of the second step (what happens after death and how animals become fossils) is known as Taphonomy, discussed below.

The third step in becoming a fossil requires lots of time. Minerals carried by water can fill pore spaces and replace the organic material of the animal and turn it into stone. This is called permineralization and replacement, respectively. There are several other ways in which animals can be preserved including molds, casts and carbonization. (TEACHER NOTE: This activity does not focus directly on the modes of preservation, but rather what happens to an animal after it dies (taphonomy) and the preservation potential/bias of different animals.)

Taphonomy is a branch of science within paleontology that examines what happens to animals after they die. Did they bloat and float? Were their remains scattered by scavengers? Did the skeleton explode due to decomposing gasses?  Examination of the fossils found by paleontologists can help explain what happened to the animal after it died and even the cause of death. This can lead to better understanding of animal interactions in the paleoenvironment.

The pathways to fossilization form a dynamic cycle similar to the water cycle, or nutrient cycles in the earth. Most animals do not become fossils, but cycle their nutrients back into the environment. This activity allows students to try to become fossils while traveling through the lifecycles of animals. They will also gain an understanding of how nutrients are cycled in ecosystems. The chance of becoming a fossil is low, and the students experience this as they travel through the Fossil Cycle. Discussion is geared toward why it is difficult to become a fossil and what types of animals are more likely to become fossilized. After students have demonstrated an understanding of the preservation bias and how difficult it is to become a fossil the different modes of fossilization can be discussed.

Reading material for the students before the start of the activity

Dice layouts that you will cut out and use for the activity.

The stations that explain your current stage (animal, detritus, etc.). This is where the dice will be.

This extension is used for the more advance version of the activity. The preservation bias demonstrates how some organisms are more likely to be preserved than others.

Students will need a piece of paper and a pencil to record their journey.

Begin by handing out the ‘Fossil Cycle Reading’ and have the students read it through to provide background for the activity. Students number a piece of paper 1 – 15. This is their ‘travel log’ where they record their journey. Students are assigned a station to begin with (plant, animal or detritus). This is determined by flipping a coin, drawing popsicle sticks or at the teacher's discretion. The first station is recorded as number 1. Students line up at the station and take turns rolling the dice. They record the roll on their log sheet and move to the next station. If they obtain a roll that instructs them to remain at the same station, they move to the back of the line for another chance to roll. Once the students have completed 15 turns or became a fossil, the game is over and they return to their seats.

Ideally, a small percentage of the students became fossils (or it took them many steps to become a fossil). This reflects how difficult it is for organisms to become fossils. If this did not happen the first time, modify the activity by reducing the number of turns from 15 to 10. Discussion can be geared toward why it is difficult to become a fossil (scavengers, preservation bias, decomposition, etc).

What happens to the animal if it does not become a fossil? (enters the nutrient cycle where it can be absorbed by other plants and animals)

The animals that became fossils can no longer pass through the nutrient cycle. Do they have another use in the paleo-ecosystem? (Not really. They are buried and forgotten about. Students may have creative answers for this. Encourage possibilities, but not ridiculous answers.) What about to modern people? (Yes! We can use them to learn about animals that once lived and the environment and climate they lived in.)

This activity can be extended for older or more advanced students by adding a second round of the game that introduces the concept of preservation bias. Provide ‘Preservation Bias Student Reading’ to the students. Each student draws an ‘organism card’ that describes animals and plants that lived in or around Fossil Lake. Each card describes the setting in which the animal or plant lives and specifies if they have hard or soft parts and if they live on land or in water. At each station the students now get 4 rolls and they have to fulfil the requirements of their animal at each station.

For example, if the student is a ‘protorohippus’ (early horse) they live on land but also have hard parts. So at the ‘DEAD ANIMAL’ station they must roll at least two ‘buried in sediment’ to advance. If they roll two eaten by scavengers they move to detritus. If they fail to advance to either station, they move to the back of the line for another chance.