The Panama Canal: The Ratification of the Carter-Torrijos Treaties. 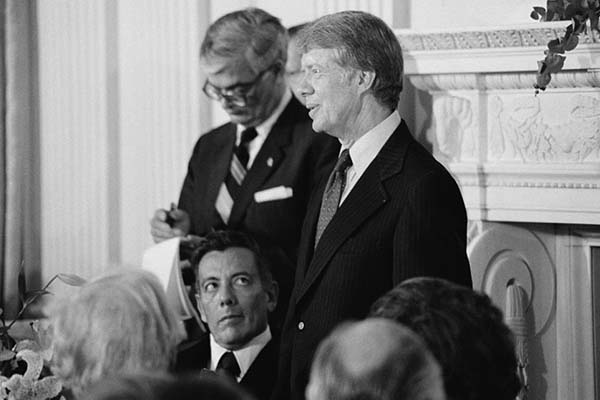 SSUSH22 Analyze U.S. international and domestic policies including their influences on technological advancements and social changes during the Nixon, Ford, and Carter administrations.
Additional Standards:
The development of civic competence requires an understanding of the foundations of political thought, and the historical development of power structures, authority, and governance, in contemporary U.S. society,as well as in other parts of the world.
Thinking Skills:
Analyzing: Break down a concept or idea into parts and show the relationships among the parts.

How must the Executive and Legislative branches of Government work together toward the ratification of a treaty?

Why and how did President Carter cede U.S. control of the Panama Canal to the Panamanian Government?

To give students an understanding of how President Jimmy Carter and the legislative branches, influenced by popular opinion, worked toward the ratification of the Carter-Torrijos Treaties.

In 1903, the United States received authority to build a canal in Panama and to control the Panama Canal Zone “in perpetuity,” in exchange for annual payments to Panama. By the 1960s, Latin American resentment of U.S. power was growing. In 1977, newly elected President Jimmy Carter, fulfilling a campaign promise, set out to negotiate a new agreement with Panama. He believed that a new treaty was needed to correct what he saw as injustices.

In spite of vocal opposition from Congress and the American public, Carter negotiated two new treaties: 1. The United States would retain the right to defend the canal forever. 2. The Canal Zone would be turned over to Panama in 1979, and a transfer of the operation of the canal would be complete by 1999. Panamanian voters approved these Carter-Torrijos Treaties in a special referendum.

The U.S. Constitution empowers the President to make treaties with “the advice and consent” of the Senate. In the case of the Panama Canal Treaties, thirty-eight Senators—more than enough to prevent ratification —had expressed opposition to the new agreements. Public opinion was also against the Treaties.

The President sent a task force across the country to make over 1500 presentations about the Treaties’ benefits. In a binder on his desk, Carter’s team kept track of conversations, rumors, and questions from Senators regarding the Treaties, quickly following up on each entry to win converts. Throughout the long Senate debate, Carter personally tracked the progress of the Treaties, talking daily with Senators, answering questions and agreeing to various Senate modifications to save the Treaties.

After three months of Senate debate in the spring of 1978, the Senate approved new Treaties governing the Panama Canal with one vote to spare: sixty-eight for—thirty-two against. Through personal attention, patience, and his willingness to make adjustments in the agreement, Carter had built support for them.

In 1999, during the Bill Clinton administration, the gradual shift of authority for the canal was complete. Former President Jimmy Carter led the U.S. delegation in the ceremony marking the handoff. Carter considers the Panama Treaties among the most important achievements of his Presidency.

In preparation for the lesson, the teacher will need to access the primary source documents, materials, and analysis templates from the Jimmy Carter Library to make necessary copies of materials for student use.
https://www.jimmycarterlibrary.gov/education/panama

A detailed procedure for unit implementation and suggested classroom activities can be found in the archived resources at the Jimmy Carter Presidential Library and Museum: https://www.jimmycarterlibrary.gov/education/panama

Dr. Jay Hakes (former director of the Jimmy Carter Library and Museum) talks about the United States' relationship with Panama as well as election monitoring in Panama. https://www.youtube.com/watch?v=Rurvy7B3KuI

This history prepared by the Panama Canal Commission looks only at the construction of the Panama Canal, beginning with the first known idea for a trans-American canal in 1513 and ending with its completion 401 years later. https://www.ushistory.org/us/44g.asp