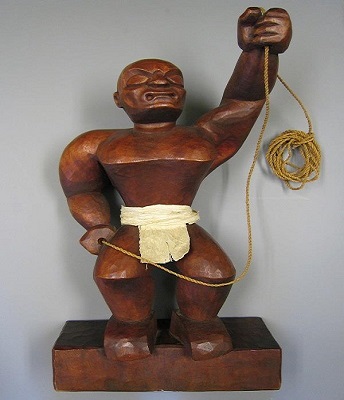 SC.4.8.1, SC.4.8.2
Thinking Skills:
Applying: Apply an abstract idea in a concrete situation to solve a problem or relate it to a prior experience. Creating: Bring together parts (elements, compounds) of knowledge to form a whole and build relationships for NEW situations.

At the end of this lesson, the students will be able to:

1. Compare and contrast the lines of evidence supporting the geological formation of the Hawaiian Islands with the cultural perspective as told in ancient Hawaiian legends.

2. Describe the theory of geological processes that created the Hawaiian archipelago while demonstrating an understanding of terms and concepts associated with hotspot theory and plate tectonics.

The geology of Haleakalā explains the creation of the islands formation from a hot spot deep within the core of the Earth. The legends of Ancient Hawaiʻi tell of the birth of the islands from the sky father Wākea and the Earth mother Papa. Other legends tell us of the demigod Maui pulling the islands out of the sea with his magic fishhook. Pele, the volcano goddess, according to ancient legends, also plays an important role in the formation of the volcanic landscape in Hawaiʻi.

Teachers should review the "Mo'olelo o Maui" story in the lesson plan. Writing materials should be available to students for writing exercise.

Haleakalā is one volcano in a chain of over 132 volcanoes that make up the Hawaiian archipelago. The Hawaiian Islands are only the tops of great volcanic mountains that have gradually built up from the ocean floor. They were formed
by continuous eruptions from a highly productive hotspot that is currently underneath the Island of Hawai‘i. The Hawaiian Islands are located in the middle of the Pacific plate, one of the Earth’s biggest tectonic plates. The plate is moving at a rate of about 4 inches per year to the northwest over top of a hotspot of magma from deep within the core of the Earth. This movement is what has created this chain of volcanic islands.

Step 2: The Legend of Maui

Read together as a class the legend of Maui and his magic fishhook.

One fine, sunny day, Maui and his brothers went fishing. They paddled their canoe far out to sea. Maui took out his special bone fishhook and prayed to the gods to make it very powerful. The winds blew softly around the canoe as it floated over the rolling sea. The brothers patiently waited for the fish to come.

They watched the sun climb higher and higher in the sky. They grew tired. Auwē! Where were the fish? After many hours had passed, the brothers decided to head for home. They were disappointed as they turned their canoe around and paddled toward shore. After they had paddled for a while they felt a strong pull on the canoe. Could they have caught a fish at last? Perhaps Maui’s special hook had brought them luck!

The brothers became very excited and paddled faster and faster. Their arms grew tired. Whatever Maui had caught was a very strong and very big! They began to wonder what could possibly be on Maui’s hook. They were frightened by the thought of a huge powerful fish. They begged Maui to cut the fishing line, but Maui refused and ordered his brothers to look straight ahead and continue paddling.

It took all of Maui’s strength to hold on to the fishing line. His special fishhook had not failed him. What a fish he must have! His tired brothers no longer cared about the fish and wished Maui would cut the line. With aching arms, they kept on paddling and looked only to the front of the canoe.

Maui continued to pull on the line as hard as he could. But he soon realized there was no fish on the end of the line – it was land! As he pulled, he watched land rise slowly out of the sea! Maui was filled with wonder and excitement! With his powerful fishhook, he had caught a huge mass of land. Never had he caught anything so large! The brothers sensed Maui’s excitement, but still they looked only to the front of the canoe.

Finally, one of Maui’s brothers could stand it no longer. His tired muscles ached and he wanted to know what Maui had caught. As he turned to look, Maui lost some of the catch! Instead of a great mass of land, all he had was a group of islands. But what beautiful islands they were! And that, so the legend says, is the way our Hawaiian Islands came to be.