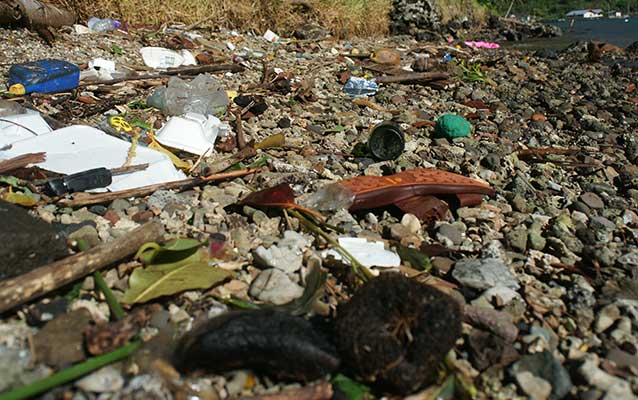 Grade Level:
Middle School: Sixth Grade through Eighth Grade
Subject:
Science
Lesson Duration:
60 Minutes
State Standards:
Standard 7: Students examine organisms’ structures and functions for life processes, including growth and reproduction. (ASDOE Elementary Science Standards: Grade 4-8, pp. 41-73)
Thinking Skills:
Remembering: Recalling or recognizing information ideas, and principles. Understanding: Understand the main idea of material heard, viewed, or read. Interpret or summarize the ideas in own words. Applying: Apply an abstract idea in a concrete situation to solve a problem or relate it to a prior experience. Analyzing: Break down a concept or idea into parts and show the relationships among the parts.

How harmful is marine debris?

2. Explore the effects of marine debris on animals, people, vessels, and habitats.

3. Identify which marine debris is most harmful.

Marine debris can have serious impacts on both marine wildlife and humans. Debris can entangle, maim, and even drown many wildlife species. Animals can also mistake some debris for food; once ingested, these materials can cause starvation and/ or choking. Although almost any species can be harmed by marine debris, certain species – including seals, sea lions, seabirds and sea turtles – are more susceptible to its dangers than others. For humans, marine debris can be a health and safety hazard. The impacts of marine debris can also result in economic hardships for coastal communities related to tourism and the fishing industry.

The two primary threats that marine debris poses to marine wildlife are entanglement and ingestion. Entanglement results when an animal becomes encircled or ensnared by debris. Some entanglement occurs when the animal is attracted to the debris as part of its normal behavior or out of curiosity. For example, an animal may try to play with a piece of marine debris or use it for shelter. Some animals, such as seabirds, may see fish caught in a net as a source of food, and become entangled while going after the fish.

Entanglement is harmful to wildlife for several reasons:
a. It can cause wounds that can lead to infections or loss of limbs.
b. It may cause strangulation, choking, or suffocation.
c. It can impair an animal’s ability to swim, which may lead to drowning, or make it difficult for the animal to move, find food, and escape from predators.

Ingestion occurs when an animal swallows marine debris. Ingestion sometimes happens accidentally, but generally animals ingest debris because it looks like food. For example, a floating plastic baggie can look like a jellyfish, and resin pellets (i.e., small, round pellets that are the raw form of plastic, which are melted and used to form plastic products) can resemble fish eggs. Ingestion can lead to choking, starvation or malnutrition if the ingested items block the intestinal tract and prevent digestion, or accumulate in the digestive tract and make the animal feel “full,” lessening its desire to feed. Ingestion of sharp objects can damage the digestive tract or stomach lining and cause infection or pain. Ingested items may also block air passages and prevent breathing, causing the animal to suffocate.

Marine mammals, sea turtles, birds, fish, and crustaceans all have been affected by marine debris through entanglement or ingestion. Unfortunately, many of the species most vulnerable to the impacts of marine debris are endangered or threatened. Endangered species are plants or animals that are in immediate danger of becoming extinct because their population levels are so low. Threatened species are plants or animals that may become endangered in the near future.

Handouts & Worksheets
1. "How Harmful Is it?" handout

Introduce Inquiry Question?
How harmful is marine debris?
Pre-Activity
Ask: What is marine debris? Can you name any marine debris you know? Where and when do you see it? Write the term on the board and explain how to understand its meaning. Explain that marine debris is man-made object discarded, disposed of, or abandoned that enters the coastal or marine environment. Tell students that marine debris can have a serious impact on animals, people, vessels, and habitat. Animals can mistake some debris for food. For people, marine debris can be health and safety hazard can also result in economic hardships for coastal communities related to tourism and the fishing industry. Marine and coastal animals are also affected when their feeding grounds, nesting sites and other habitats are harmed by marine debris. For example, lost or discarded fishing gear and nets can drag along the ocean floor or through coral reefs, damaging the animals and plants that live there.
Watch Movie
http://oceantoday.noaa.gov/ourdebrisfillingthesea/
Before the video, ask students to pay close attention as to how harmful marine debris is. Have students watch the “Marine Debris” video. After the video, check student’s comprehension by asking the following questions:
1. Who were affecting by marine debris?
2. What can we do to help prevent marine debris?
3. What happens when it is too much debris in the ocean?

Activity 1: Harmful Trash
1. Distribute the “How Harmful Is It?” handout to the class. Make sure students are familiar with the types of debris presented in the handout. Review with students the instructions at the top of the handout. Then have student complete. (10 mins).
2. Collect the handouts and calculate class subtotals for each type of debris on the handout (add together the students’ subtotals and divide by the number of students in the class).
3. Write the subtotals on the board. As a class, analyze the results of the tally. Initiate discussion by asking questions such as the following:
According to class results, which types of marine debris are most harmful to seals, sea turtles, and sea gulls? Which type or types of debris seem to be most harmful to animals in general? (Repeat this series of questions for people, vessels, and habitats.) According to class results, which types of marine debris are most harmful? Do you agree? Why or why not? According to class results, which type of debris is the least harmful? Do you agree? Why or why not?Are there any types of debris that received a low grand total, yet are very harmful on the list? Which ones?
4. Discuss with students how their individual results might have varied from the class results. Help them to understand that people may have different opinions about how harmful certain debris is based on their own attitudes and experiences.
5. The discussion also should introduce the concept that the abundance of certain types of debris can make them more harmful on a large scale than other types that appear to be more dangerous. For example, bottles and cans can be abundant forms of debris, but they are not as potentially harmful as other forms of debris such as discarded fishing line and abandoned nets. One fishing net can continually harm or kill unsuspecting wildlife, while hundred soda cans on the beach are primarily an eyesore and will not intentionally harm marine and coastal animals and communities.

How harmful is marine debris?

Encourage family and friends that marine debris is a problem we can solve together. We can all help with the smallest action. Reduce, Reuse, Recycle and participate in local beach and stream clean up. If we each do a little, together we can make a big difference.