Fruit Bats Are Our Friends 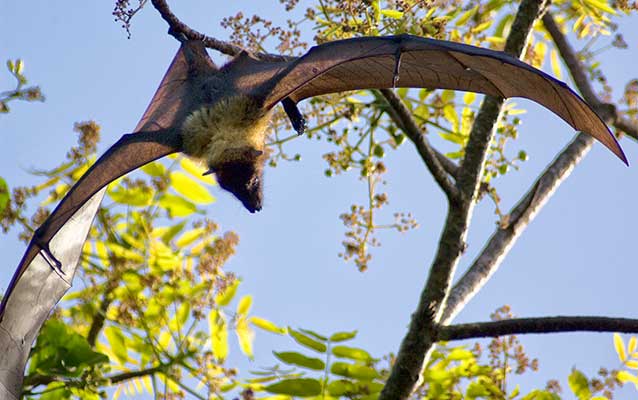 3. Learn about the role of the National Park of American Samoa in protecting fruit bats.

2. Power point program
3. Crayons and/or markers
4. The Rat and the Bat and Other Short Stories by Pemerika L. Tauiliili

Ask: Has anyone seen a fruit bat? If yes, when and where did you see it? If not, what do you think it is? Explain that fruit bats are American Samoa’s only native mammal. They do not suck people’s blood but instead feed on fruits, nectar, and seeds of trees. Tell students that fruit bats inhabit the tropical rainforest ecosystem where they sleep, feed, and fly around.

Distribute the Fruit Bat Illustration to students. Provide students with crayons and/or markers and have them color the fruit bat. When they have finished, have them write their name at the top of the page. Ask for a volunteer to share their fruit bat coloring to the class. Have Pua the fruit bat engage with students during this time. Before the next activity, ask students to put away their fruit bat coloring and return the crayons and/or markers they used.

Fruit Bat Story Time
Read to the students “The Rat and the Bat” story. Gather the students into a circle and ask them to pay attention while you read the story about how fruit bats got their wings.

Have a class discussion about what are fruit bats and their importance to American Samoa’s ecosystem. Include bat puppet to engage students. Ask the following questions based on the story:

1. In the story, how did fruit bats of today get their wings?

2. What ways are we threatening the survival of Pua the fruit bat? (Responses will vary but may include destroying of fruit bat habitats, disturbing roosts, hunting fruit bats, harming fruit bats by throwing rocks at them, etc.)

Encourage your family and friends to protect our fruit bats. Leave fruit bats alone and do not throw rocks at them. Report to the American Samoa Department of Marine and Wildlife any instances of people attempting to harm or hunt fruit bats.