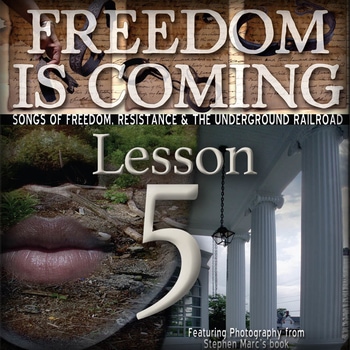 What role could music play in the lives of enslaved people?
In what ways does the MUSIC OF ENSLAVED PEOPLE communicate the basic facts of bondage?
What specific facts and truths can be learned from such music?
Can art communicate truths in a way that more straight forward communication cannot?

This is the fifth set of lessons in a multi lesson unit.

In this lesson students use four African American spirituals to explore the concepts of metaphor and coded spirituals, and to examine the struggle for freedom. The lesson uses the two cd set Freedom Is Coming: Songs of Freedom, Resistance, and the Underground Railroad (available from the New Orleans Jazz National Historical Park, 916 North Peters Street, New Orleans, La., 70116). www.nps.gov/jazz

The lessons designed to accompany the cd set can stand alone or can be used as part of a more extensive unit exploring the experience of enslavement, resistance, escape, and the Underground Railroad. They can also be used in conjunction with the cd/lesson plans designed for Songs of the Lower Mississippi Delta, which can be obtained from the above address. Those lesson plans relate to slavery and to the American Civil War.

If previous lessons were done, students should now be familiar with the process of examining the music.

These are liner notes prepared by the National Park Service that explain background and historical information on the songs.

This is a worksheet that is partially filled in for completion by the students. It also includes an answer key.

This is a worksheet like that prepared for completion by students, but it does not include any suggested answers. As a result there is no key.

This sheet gives suggested questions for discussion and possible answers.

This contains a brief overview of the theory of coded spirituals with examples.

These are the lyrics for consideration and analysis by the students.

Worksheet set up in a multiple choice mode, but otherwise identical to WORKSHEET- Lesson 5-Coded Spirituals

Introduce students to the concepts of Metaphor and Coded Spirituals.

A spiritual is a religious song, often in the Christian African American tradition, which expresses ideas of a personal closeness and relationship with God. African American spirituals often make use of certain musical idioms. Among these are “call and response” in which one phrase is answered with another. Another characteristic is the use of “syncopated rhythm”, the accenting of a beat that would not normally be accented or the absence of a beat where one would usually be accented. Spirituals are highly emotional songs. They often express intense feelings of joy and sorrow. It is also common in African American spirituals to compare the believer or the church to figures from the Old Testament. In African American history, especially during the experience of enslavement, spirituals were sometime coded, meaning that the meaning was intentionally disguised from the slave holders and other whites through use of words or phrases understood by the singers, but not by the slave holders. An example would be to refer to the Free States as “the promised land” or the slave holders as “Pharaoh”. Historians still debate the extent to which spirituals were intentionally coded. In any case, listeners often interpreted lyrics that referred to the suffering of biblical heroes as referencing their own personal suffering and drew strength from such songs.

When having the discussions, use your judgment as to the extent to which you should correct their misconceptions and tell them which choices are correct. It can be advisable to point out one or two correct responses and one or two incorrect responses so they have models to guide them.

Now that the students have a grasp of the concepts of Metaphor and Coded Spirituals they can do a graded activity that will assess their understanding as well as give them practice in both identifying and understanding metaphor. The worksheet has items inserted for the students to consider. An ANSWER KEY is provided for the worksheet. You could also create an answer bank if it is believed that such an aid would be useful to the students. SEE WORKSHEET UNDER BOTH MATERIALS AND ASSESSMENTS. If lyrics have not yet been distributed, they should be distributed at this point.

A BLANK copy of the worksheet is available under MATERIALS.

SUMMING UP AND EXTENSION OF LEARNING.

This is the same worksheet that is presented as Procedure #3 and under LESSON MATERIALS as #3.  There are 23 blank spaces to be filled in. Count off 4 points for each incorrect.

African American spirituals, especially those created in the days of slavery, often used metaphors to hide the meaning of the songs. Imagine the reaction of a master upon hearing a group of bonded persons singing “I’m going to run away”. To prevent this from happening, many spirituals were “coded”. TASK: After hearing the songs Steal Away to Jesus (in the Midnight Hour), Wade in the Water, Swing Low Sweet Chariot, and Daniel, and then referring to the lyrics sheet of the songs, complete the section below. In some cases you have been given the metaphor. You should write what you think it means. In other cases you have been given a meaning. In those cases write a short section of the lyrics that would match the given meaning. If the song is NOT given on the sheet, you also must tell which song the metaphor is from.

This lesson requires a good deal of complex and abstract thought. The best strategy for struggling learners would be to place then in a group and allow for a sharing of answers.

ALTERNATIVELY, you may provide them with the STUGGLING LEARNERS WORKSHEET. It is identical to WORKSHEET- LESSON 5 except that it is set up in a multiple choice mode. The answer sheet is provided on the same file.

Many songs contain coded references that are not grasped by those who do not know the subculture of the group which created the song, or the slang of the writer. Think of things as simple as Five 0 meaning the police (a term based on the 1970’s cop show “Hawaii Five 0”).

It can be a tune you create, one from a favorite song of yours, or any other tune.

Give the name of the tune.

Then write a set of lyrics in which you express ideas about people struggling for freedom, or in which you advise people how to get their freedom (think of “Wade in the Water” as advising people to stick to the creeks to escape the tracing hounds of slave catchers.)

A two line example has been provided.

The grading rubric has also been provided.

Jingle Bells “Stepping out, stepping out, going for a jog. Watching out, all the way, for that Five 0 dog”

WHICH MEANS I am going to escape, and I must be sure to keep an eye out for the slave holder’s tracking hound.

Proper translation of hidden meaning given

Hidden meaning properly expresses ideas of the struggle for freedom