Can You Outrun the Wright Flyer? 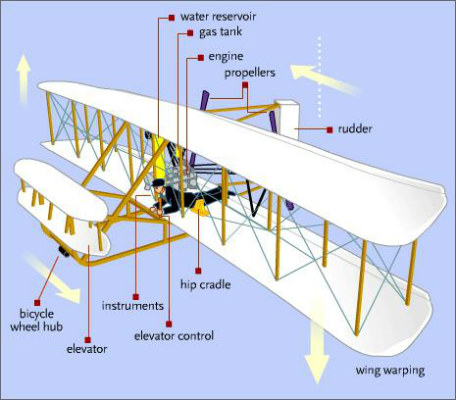 4.H.2.1 Explain why important buildings, statues, monuments and
place names are associated with the state’s history

W.4.3.d Use concrete words and phrases and sensory details to convey experiences and events precisely.

What responsibility does society have to preserve historical sites in North Carolina for future generations?

The student will be able to:

a) Read about and understand the historical significance of the 1928 dedication event when the flight markers were placed.
b) See the importance of the rail that was used to push the flyer for takeoff.
c) Estimate the distance of the first flight.
d) Trace the 4 distances and times the flyer actually flew by running between the markers as they are being timed.

Many students think the Wright brothers flew on December 17th, 1903 from the top of Big Kill Devil Hill. Students may be surprised to see that the powered flight location is actually flat ground. Today the flight line is a grass field. Students may also be surprised to discover that when Orville and Wilbur flew their machine, the landscape was a wide sandy beach dotted with dunes. Familiarize yourself with the details of the first flights by reading an excerpt from Orville’s diary using the link below which focuses on the events of December 17, 1903. This excerpt also describes the weather conditions of the day which might be helpful to students as they answer questions throughout the lesson.

The Wright brothers made 4 successful flights on December 17th before the plane was destroyed by a huge gust of wind. The first flight lasted 12 seconds and covered a distance of 120 feet. The second flight was approximately 12 seconds long and had a distance of 175 feet. The third flight lasted for 15 seconds and went a little over 200 feet. The fourth flight lasted 59 seconds and went 852 feet! Shortly after the fourth flight a huge gust of wind tumbled the flying machine and it was basically destroyed. The flight markers at the park site show these distances. There is also a photo/informational panel that describes the dedication ceremony 25 years later and shows who was in attendance on that day in 1928.

Use some of the suggested read aloud books to students so students are knowledgeable about the events that led up to the first successful flight.

•  Read an excerpt from Orville’s diary about the 4 flights that took place on December 17, 1903.  (See link above under background heading.) This could also be copied and read on-site instead so students can see the markers as you read. This may help them gain a better mental image of what actually happened.

•  Use resources about Amelia Earhart so students will be familiar with her role in aviation.

•  During the first flight, Orville traveled 120 feet in 12 seconds. Ask students what they think 120 feet looks like. Have students partner with a classmate. Using yarn, have each pair measure how long they think 120 feet would be. They should not actually use any measuring tools. Bring the yarn lengths to the park site so students can measure the distance from the starting boulder to the first flight marker and compare their results.

For this lesson students will need: a stopwatch/timer, a whistle, yarn, and scissors. For a full copy of the lesson plan, click the lesson materials link below.

1.  After viewing the hangar and camp building of the Wright brothers, proceed over to the First Flight Boulder and read the inscription on the plaque. Take a group photo around the First Flight Boulder. You can share this with the class later and compare it to the picture above. Students should make a connection with Amelia Earhart as well as the Wright brothers as being pioneers in aviation.

2.  Below are suggested standard based questions to ask students at the park. These questions could also be asked in class after the visit.

3.  Look at the photo marker of the actual flight. Does the landscape still look the same?
What do you think changed the landscape over time?

4.  If you have not already shared the diary excerpt, have students look at the 4 markers as you retell or read the excerpt. Discuss whether students thought the distances were longer or shorter than they really are. Have students take out their yarn and actually measure their approximations.
How close were they to 120 feet? How many were longer? How many were shorter?
Was anyone correct? Who was the closest?

5.  Point out the rail that was used to guide the flyer. There was actually a dolly that the flyer was placed on to roll down the rail. Ask students why the rail was important? Why did the brothers decide to go in that direction? (They wanted to fly into the wind for better lift) You can also point out that it was a very cold and windy day (this is in the journal entry read earlier) which they considered perfect for their trials. Why?

6.  Ask students if they think they can run as fast as the Wright Flyer flew?  Today we will test their theories out! Have students line up horizontally next to the boulder.  Tell students that when you blow the whistle, they are to run until you blow the whistle again after 12 seconds at which time they will freeze.  Did they get past the first marker? (most of them will) They can mentally calculate that 120 feet in 12 seconds means they had to run 10 feet per second. Have students return to the starting boulder. How do you explain that the second flight went farther than the first but was still completed in 12 seconds?  Will they have to run faster or slower to get to the next marker in 12 seconds? (Answers will be determined by how far they ran each time) They will then run to try and reach the second marker. Follow the same procedure and stop them after 12 seconds again.  Did they get past the second marker? The third trial you will time them for 15 seconds. Did they make it to the third marker? Before attempting the fourth trial, ask again if they think they will be able to make it in 59 seconds to the fourth marker.  That would mean they would have to run about 14.5 feet per second. They might need to rest a minute or two before the last run. Complete the final run blowing the whistle after 59 seconds.

7.  After the fourth run find out how many students actually reached it in 59 seconds. Give them a cheer for running as fast as the first airplane flew!  Open up a discussion for strategies they may have used to reach each marker in the allotted time today. Remind them to keep their ideas, thoughts and feelings in their heads as they will be discussing this more when they get back to school.

Seconds - The unit of time, the second, was defined originally as the fraction 1/86 400 of the mean solar day.

Feet - The foot ( pl. feet; abbreviation: ft; symbol: ′, the prime symbol) is a unit of length in the imperial and US customary systems of measurement. Since 1959, both units have been defined by international agreement as equivalent to 0.3048 meters exactly.

Monument - A statue, building, or other structure erected to commemorate a famous or notable person or event.

Memorial - Something, especially a structure, established to remind people of a person or event.

National park - A scenic or historically important area of countryside protected by the federal government for the enjoyment of the general public or the preservation of wildlife.

State park - State parks are parks or other protected areas managed at the sub-national level within those nations which use "state" as a political subdivision. State parks are typically established by a state to preserve a location on account of its natural beauty, historic interest, or recreational potential.

As a follow up have students write about their visit to the Wright Brothers National Memorial. Below are some ideas to choose from to guide their writing.

•  Tell me about the results of your trials today and any strategies you may have used to reach each marker in the allotted time. Did you run at the same pace every time or did you have to speed up to reach the marker? How did you feel running to the last marker? Was it harder or easier than you expected?

•  Describe the feelings you experienced knowing that you were standing in the same place the Wright brothers lived and worked.

•  Do you feel any greater connection to the Wright Brothers National Memorial or the people involved now that you have visited the park?  How?

•  How has the landscape changed since 1903? (Look at some of the images from suggested websites)

•  Do you think the Wright brothers would choose this site to conduct their trials today?  If not, do you have a suggestion?

•  Is it important to preserve historical sites such as the Wright Brothers National Memorial? Why or why not?

•  Why is history important for us to convey from generation to generation?

•  How is history preserved and passed on to others?

Some of the questions from #2 above could also be used in this writing.

Student writing and class discussion can be used as an evaluation tool to assess depth of knowledge and understanding.

•  Images of the Wright brothers and flight experiments in Kitty Hawk

•  You tube video about Amelia Earhart

Who Were the Wright Brothers? by, James Buckley, Jr

The Wright Brothers’ Glider  by, Gerry Bailey and Karen Foster

You Wouldn’t Want to Be on the First Flying Machine!  by, Ian Graham